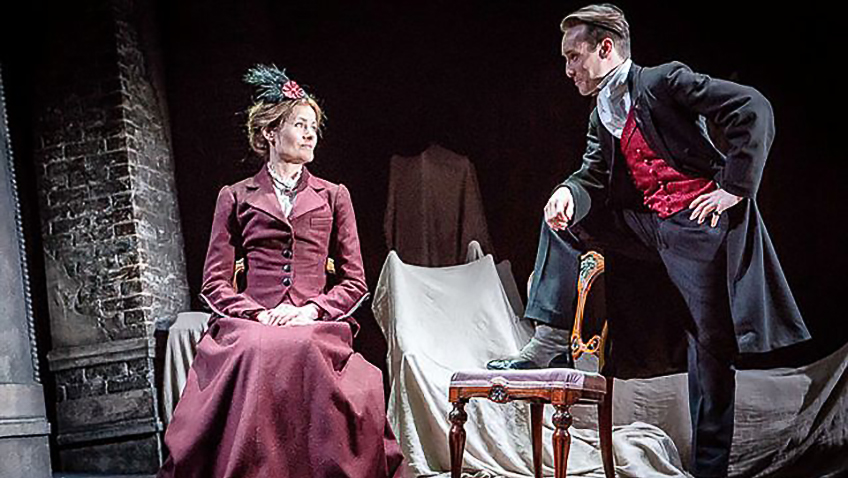 Henry James’ ghostly gothic novella of 1898 first appeared as a magazine serial, its episodes geared to keep readers enthralled and shuddering. Onstage it’s always a big challenge to create a gripping atmosphere full of frights and ongoing intrigue but, for the most part, this Dermot McLaughlin Production of Tim Luscombe’s stage adaptation does cut the supernatural mustard in creating a tense drama that has its audience genuinely flinch and start.

Sarah Perks’ set combines wonderfully with David W. Kidd’s lighting effects and John Chambers’ interesting, inventive and pleasing sound-scapes in creating an ongoing uneasy eeriness. At times this can be subtly soothing, only then to be suddenly punctuated by unexpected alarm. Fine combinations of sudden flashes with brittle snaps and cracks, of shadows and scary lighting, silhouettes and striking apparitions work to great effect without being forced. As a governess arrives at the remote Bly estate in 1840 to take charge of two orphaned children, the delightful (or is she?) little Flora, and young Miles, recently and mysteriously expelled from school, she also encounters other frightening, supernatural presences. With a huge framework of ornate stone and brickwork built at an appropriately distorted and surreal angle, the set is both handsome and evocative. Outside the massive, impenetrable windows the vastness and isolation of the estate is hinted at by an outline of unnatural-looking forest. Voluminous dust-sheets play their part, of course, as do a rocking-chair and rocking-horse that inevitably, yet still spookily, rock at times when no-one’s on them.

As the grown-up Flora corners and confronts her former governess to get at (or fail to get at?) the truth of the past, a structure of alternating flashback scenes maintains the story’s momentum well, incorporating the thought-provoking ambiguity of James’ psychological drama (though skewing itself slightly in one particular direction, perhaps.) What is the truth of those terrifying ghostly apparitions of dead former governess Jessel and her lover, the depraved former employee Quint? Can the truth be separated out from the potential delusions of a disturbed, paranoid mind, from deliberate lies, or even, perhaps, from the existence of pure evil?

A cast of four conveys the story’s frights and puzzles pretty well though impact does falter towards the end. Janet Dibley, as the governess, manages moderately well her very difficult task of treading the blurred line between horrified victim or disturbed perpetrator, and Maggie McCarthy displays a fine presence as good-natured housekeeper Mrs Grose. As Flora and Miles (and also Miles’ own uncle and scary Peter Quint), Amy Dunn and Elliot Burton both have the extra task of transforming back and forth from (angelic or demonic?) child to adult, Amy Dunn performing especially well as the younger Flora.

The Turn of the Screw with its shocks, suspense and ambiguities has inspired plays, opera, TV, film and radio adaptations, as well as Susan Hill’s The Woman in Black, and its twists and turns still have the power to rivet.

The show travels next to Derby, York, Dublin and Oxford.