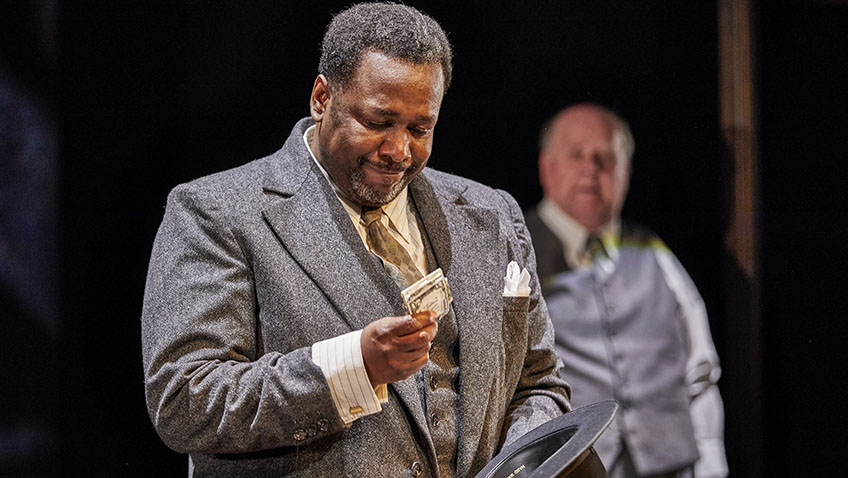 Robert Tanitch reviews Death of a Salesman at The Young Vic, London, SE1

Salesman Willy Loman and his family in this splendid production by Marianne Elliott and Miranda Cromwell of Arthur Miller’s masterpiece are African-American; and, if I were seeing the play for the first time and did not know who had written it, I would presume the playwright was African-American, so well does it work. The actors are so good.

The common man, said Miller, is as apt a subject for tragedy in its highest sense as kings are. Death of a Salesman is a parable on the American Dream after the Dream has gone sour. 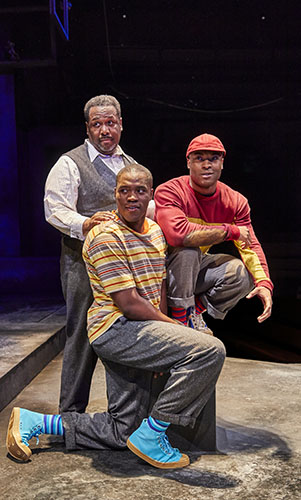 Wendell Pierce, Arinzé Kene and Martins Imhangbe in Death of a Salesman

63-year-old Willy Loman (Wendell Pierce, excellent) is still driving 700 miles to his destination and when he gets there, nobody knows him anymore, nobody welcomes him. The old buyers, who could help him, are either retired or dead.

His wife (Sharon D. Clarke, excellent) gives a vivid picture of him taking his valises in and out of the car all day long and not making a single sale. She wonders what goes through the mind of a man driving 700 miles home having not earned a cent.

There are excellent performances also by Arinzé Kene and Martin Imhangbe as Loman’s sons: Biff, who blames dad for his travails, and Happy, an immature philandering bum, according to his mum.

Death of a Salesman is a play of memory; but here are, Miller insisted, no flashbacks, only daydreams. The action is happening in Loman’s mind now.

Loman has lost touch with reality and gone slightly crazy and is contemplating suicide. The straw which finally breaks him is when he is brutally fired by his young boss who is totally indifferent to the thirty-four years he has given to the firm.

At one point Miller was going to call the play The Inside of His Head. The constant transitions from reality to memory to fantasy and back have always presented staging difficulties.

Anna Fleischle, the designer, has gone for a totally unrealistic set with dark and ugly walls, spaces for doors and hanging picture frames and furniture. The directors regularly put the actors in a stop/start/ freeze mode.

When Death of a Salesman premiered in New York in 1949, winning a Pulitzer Prize and an Academy Award, such was the impact it had on audiences that Bernard Gimbel, head of one of New York’s largest department stores, immediately gave orders that none of his employees was to be fired for being over-age.