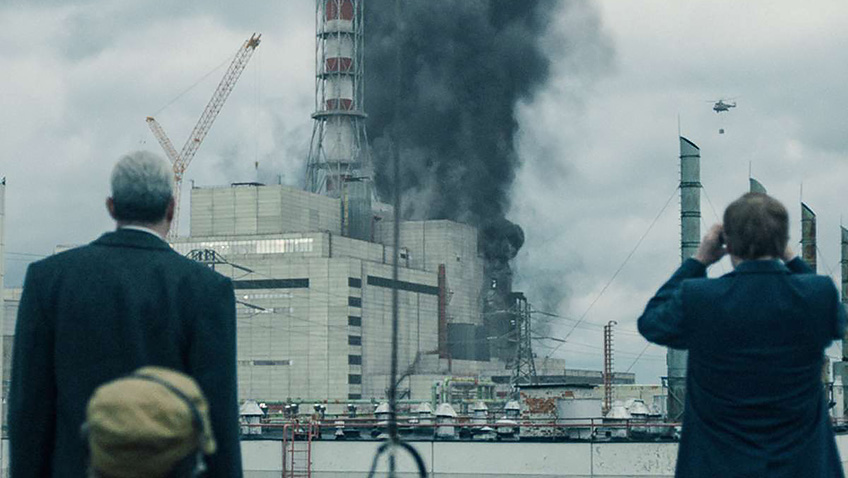 The ultimate disaster movie – and it’s for real

Chernobyl (Acorn). The mini-series begins with a minute by minute reconstruction of the world’s largest nuclear disaster. It was in 1986 in the Ukraine. The sheer scale of the explosion is awesome. The tension is immediate. The bravery and self- sacrifice of the plant workers, the volunteers, the firemen and the miners to contain the damage is deeply moving.

Director Johan Renck takes a documentary approach to the horrors of radiation and the aftermath. The contamination on face and bodies is shown in graphic detail. 117,000 people had to be evacuated. Concrete is poured on top of buried coffins. Livestock, dogs and cats are slaughtered.

The film exposes the lies and the cover-up, endemic in a totalitarian state. The cast is headed by Jared Harris who plays the chief nuclear physicist fully aware of the enormity of trying to fix something that has never happened before and, for political reasons, having to lie. Stellan Skarsgård is the Deputy Prime Minister. Emily Watson plays a fictional character, a composite of many people. Paul Ritter is the test supervisor who did not follow procedure.

The series ends with the criminal trial. The explosion was caused by a flaw in the reactor design and cost-cutting. The number of people who died from cancer in the long term is not officially known but it is huge.

Blue (Sparky Pictures) is an Australian documentary by Katrina Holden about our failure to protect our ocean. Here is another potential disaster in the making. Less than 5% of the ocean is protected from fishing and industrialisation. The ocean is emptying at an alarming rate and filling with trash. Chicks are born with plastic in their stomachs. In two decades there will be more plastic than fish in the sea. Turtles are being killed by ghost nets. The illegal trade on sharks (killed for their fins) continues in Indonesia. Tuna are heading for extinction. The message is loud and clear: stop eating unsustainable fish.