Home / LIFESTYLE / REVIEWS > / THEATRE REVIEWS / Blood Wedding, one of the great plays of the 20th century

Blood Wedding, one of the great plays of the 20th century

Federico García Lorca remains Spain’s best known modern playwright. Of the three plays on which his fame rests –Blood Wedding, Yerma and The House of Bernarda Alba – Blood Wedding is the best known but ironically the least performed. It is the most difficult to get right.

Lorca was born in 1898 and died in 1936 during the Spanish Civil War, murdered by the fascists for his left-wing views and his homosexuality. His body has never been found. 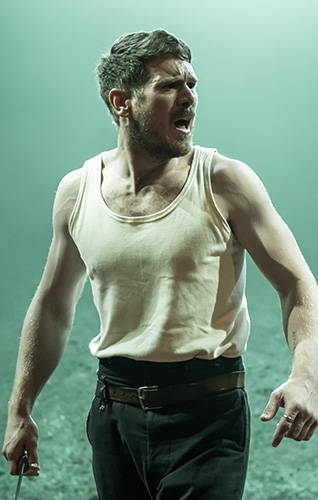 Blood Wedding, directed by Yaël Farber and translated by Marina Carr has been transferred from rural Spain, Andalusia, to rural Ireland, County Offaly. The characters are now Irish and acted by Irish actors. I doubt if Lorca would have objected. He was a great admirer of Irish playwright John Millington Synge’s Riders to the Sea.

The story was inspired by a newspaper report. A bride (Aoife Duffin) on her wedding day runs off with her former lover (Gavin Drea), a married brute, who had been responsible for the death of the father and the brother of the groom (David Walmsley).

The bride lives in the mountains. The groom lives in the plains. The feud is long-standing. Susan Hilferty’s setting is a bullring, a perfect arena for men with naked torsos fighting to the death.

The peasants are superstitious savages, steeped in blood – the blood of passion and the blood of revenge-killing. Women are second class citizens. Married for the land and money they bring to the table; and there to be raped and to give birth to healthy sons who can till the land.

Lorca’s distinctive storytelling, with its poetry, music and song, has the simplicity and dramatic potency of a timeless ballad. The play is both realistic and emblematic. One of the most effective visual images is the lover riding an invisible horse across an invisible plain.

The characters, deeply fatalistic, are stalked by Death. Lorca has said that “in Spain the dead are more alive that the dead of any other country in the world.” The Moon (Thalissa Teixeira in a white suit) punctuates the action with songs. Death (Brid Brennan) appears in the human shape of a weaver.

Olwen Fouéré, who plays the groom’s fierce, white-haired mother, dominates the production with her striking presence and her powerful performance.