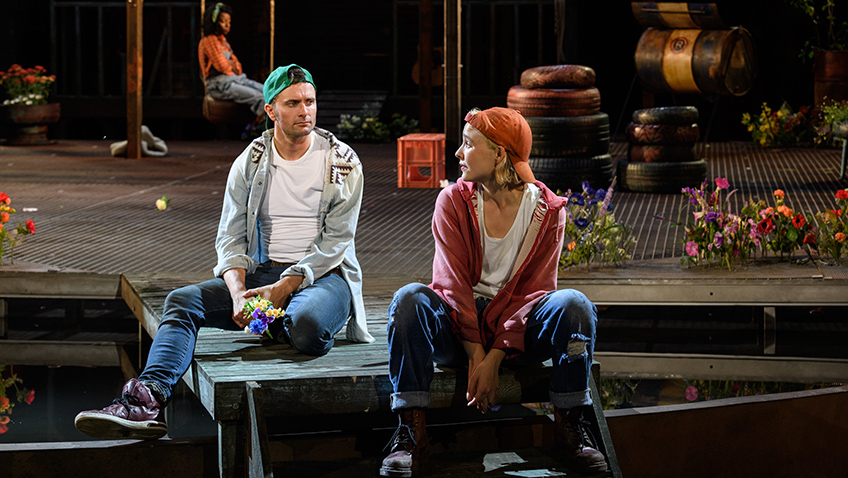 Robert Tanitch reviews As You Like It at Open Air Theatre, Regent’s Park, London NW1

“What shall I do with my doublet and hose?” asks Rosalind, when she is disguised as a man and head over heels in love with Orlando, who thinks she really is a boy.

The question does not make much sense if Rosalind is not wearing a doublet and hose.

The Open Air Theatre should be the perfect venue for Shakespeare’s comedy but Max Webster’s modern dress production robs the play of its pastoral charm. 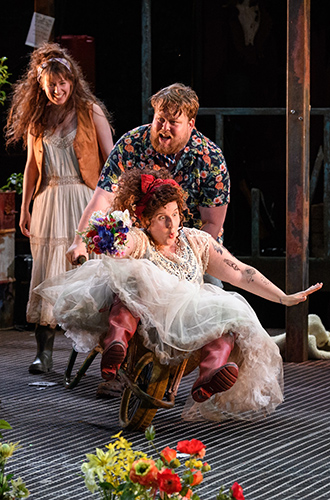 Joanne McGuinness, Danny Kirrane and Amy Booth-Steel in As You Like It

It all looks so ugly. It would be a perfect setting for the broken-down caravan belonging to Johnny Rooster Brown, the gypsy trouble-maker facing eviction, in Jez Butterworth’s Jerusalem.

There’s a lot of rubbish piled on the two sides of the set and a lot of rubbish in a pond. It is presumably there to make some environmental comment. But there is nothing in the text or the production to back it up.

Rosalind is the most adorable of all Shakespeare’s women. Ever since 1740 the role has always attracted the finest actresses. The best Rosalind I ever saw was Vanessa Redgrave.

But Rosalind (Olivia Vinall) and Orlando (Edward Hogg) in this production are upstaged by Touchstone, the role Shakespeare wrote for the chief comic actor in his company; and like so many clowns in Shakespeare, he is only as funny as the actor playing him.

Danny Kirrane’s big, burly, yobbish Touchstone is very funny and he has a big success with the audience when he takes off his shirt to impress the foul and sluttish Audrey, a prequel to a good nibble in a tent. His water-torturing of a simpleton, William, a rival suitor for Audrey, is as unexpected as it is nasty.

Maureen Beattie’s Jaques is not a patch on Pearce Quigley’s Jaques at Shakespeare’s Globe. The famous “All the world’s a stage speech” ends on “second childishness and mere oblivion” and the final line, “sans teeth, sans eyes, sans taste, sans everything” is saved for later and loses its impact completely.

The audience cares most for Silvius, the foolish shepherd who is in love with Phebe, and they are audibly upset when Phebe, who is indifferent to him, throws his teddy-bear in the pond.