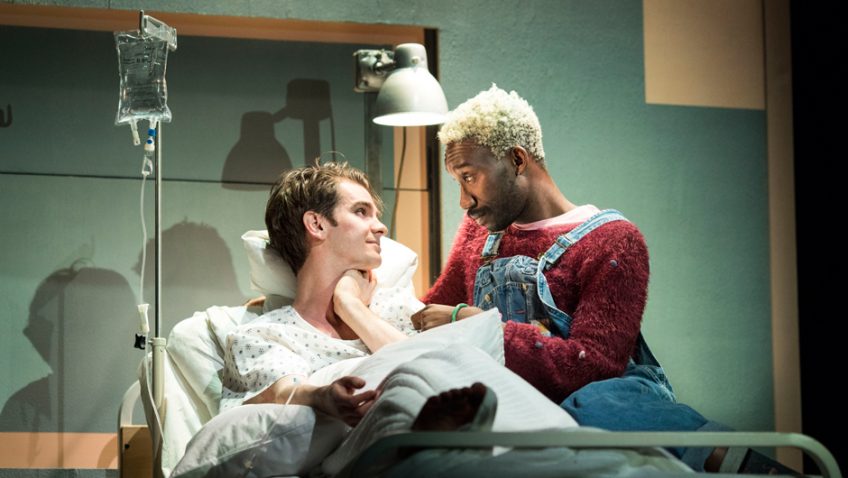 Tony Kushner’s award-winning epic, first seen at the National Theatre in 1992, describes the impact of AIDS on the gay community in San Francisco in the 1970s, during the inaction of the Reagan administration There is an unforgettable metaphor of a leaking boat of survivors crossing the Atlantic, its members throwing each other into the sea, until only seven out of the original seventy are left

Angels in America, a gay fantasia on national themes, is divided into two parts: Millennium Approaches and Perestroika.

Kushner’s script, written in anger and compassion, hope and despair, deals with politics, history, sex, racism and religion, in a fantastic manner.

Gays who hope Heaven will be like San Francisco are in for a big disappointment. In Kushner’s account God is not only noticeable for His absence on Earth; He has also abandoned Heaven.

The revival is a major event. Marianne Elliott’s excellent production (designed by Ian MacNeil) has an excellent cast.

Prior Walter (Andrew Garfield) is dying. His lover (James McArdle), unable to cope, panics and takes a new lover, a Mormon (Russell Tovey), a Republican lawyer and closet gay, who has left his wife (Denise Gough). Nathan Lane, who makes an instant comic impact with a series of rapid-fire phone calls, is unexpectedly cast as the ruthless lawyer, Roy Cohn, who sent the spies, Ethel and Julius Rosenberg, to the electric chair.

He refuses to admit his homosexuality. “I’m not a homosexual. Homosexuals have no clout. Do I look like a person with no clout?” Cohen was the young Donald Trump’s lawyer and adviser.

There are admirable performances from Russell Tovey, Denise Gough and Susan Brown as the Mormon lawyer’s mother.

McArdle rattling on about democracy and how American politics have nothing to do with race is very funny and so is Nathan Stewart-Jarret as a night nurse, listening, in silence, to him.

The scenes with the Angel of Death, which used to be heavy going when the play was first produced, work much better now because the Angel (Amanda Lawrence with huge eagle wings) has been imaginatively choreographed. There is a great scene when Prior wrestles with the Angel, which outdoes even Jacob and Gabriel.

Angels in America can be seen on two separate days or on one day. I saw it on one day which may be too long for some audiences. I went in at 1.00 pm and came out at 11.15 pm. There are two intervals in each play and a long interval between Millennium and Perestroika.

NB. Angels in America is sold out, except for day seats and lottery seats .But you can still see it. Angels in America will be broadcast to cinemas across the UK and internationally via NT Live; Part One on 20 July and Part Two on 27 July ntlive.nationaltheatre.org.uk

Russell Tovey and James McArdle in Angels in America – Perestroika