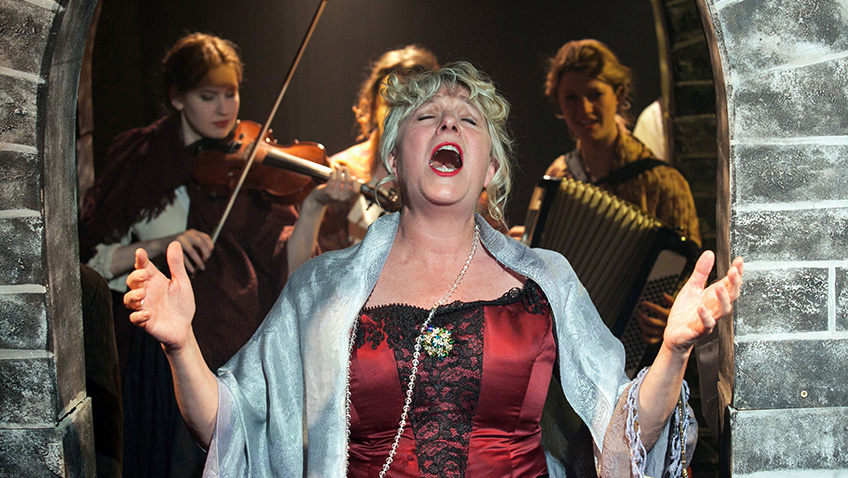 One of the most familiar images of the silent era film (in people’s imagination at least) is the heroine tied to a railway track and rescued just in time before she is killed by the oncoming train. The first time such an action was seen on the stage was in 1867 in Austin Daly’s Under the Gaslight.

Dion Boucicault (1822-1890) foremost Irish actor, playwright and manager of the Victorian era, wrote, adapted and translated of over 200 works, pinched the idea.

In his play it is a man who is drugged and placed across the railway track of the first London underground. The Metropolitan Line had opened in 1863 and ran between Paddington and Farringdon. 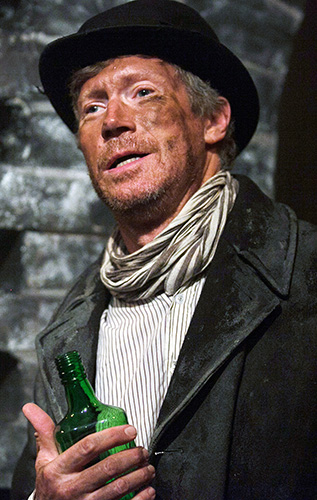 Simon De Deney in After Dark

After Dark, sub-titled A Drama of London Life, premiered in the UK at Princess Theatre in Oxford Street in 1868. The play, an authorized adaptation of an 1854 French melodrama by Eugène Grangé and Adolphe d’Ennery called “Les Oiseaux de Proie,” was a smash hit in the UK.

When the play went to America in 1868 Daly took Boucicault to court accusing him of plagiarism. The court ruled in favour of Boucicault but awarded Daly a royalty for every performance in the USA. The publicity was good for the box office and the play, advertised on its posters as The Great Rail Road Scene, did even better than it had done in the UK.

After Dark was a typical Victorian melodrama. A beleaguered aristocrat stands to inherit a baronetcy and a fortune; but only if he marries his cousin. The plot includes forged documents, blackmail, attempted suicide and an attempted murder.

The villain is the Queen of Crime (Victoria Jeffrey) who runs a gambling casino music hall which is also a brothel. Her partner in crime is a crooked lawyer (Toby Wynn-Davies looking very villainous), a former convict who had been transported to Australia but came back with a new identity.

Boucicault provided popular entertainment for mass audiences. Princess Theatre sat 2,500. Finborough Theatre seats 50 and is more suited to the cup-and-saucer dramas of Tom Robertson than melodramas of Boucicault (The Coleen Brawn, The Shaughraun, The Streets of London, etc) which rely on spectacle and physical action (drowning, exploding steamboats, burning houses, boat races, etc) rather than characterisation.

“Sensation is what the public wants,” said Boucicault, “and you can’t give them too much of it.” The heroine jumps off Blackfriars Bridge but she is saved by an old drunk (Simon De Deney), a destitute veteran of the Crimean war, who turns out to be her long lost father.

The best way to act his melodramas is to take them seriously and not to send them up and encourage the audience to boo the villain and cheer the hero, as has been done in the past by some patronising revivals.

Isn’t it time, perhaps, that either The National Theatre or The RSC revived Boucicault’s The Corsican Brothers with a big spectacular production?