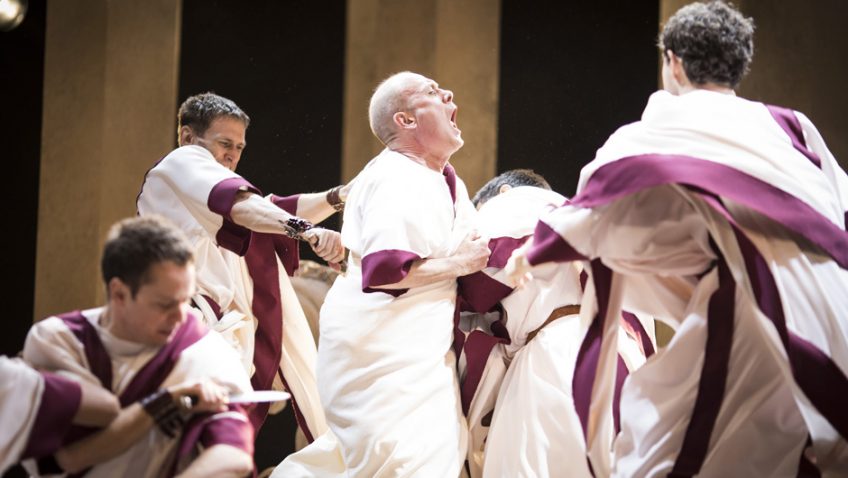 Despite everybody knowing what happened on the Ides of March, it doesn’t spoil the enjoyment of the play one bit. It could be said to increase it.

Shakespeare keeps up the tension as to whether the murder will succeed right up to the actual stabbing. He then introduces a new tension with the great speeches in the Forum and the unleashing of the mob. 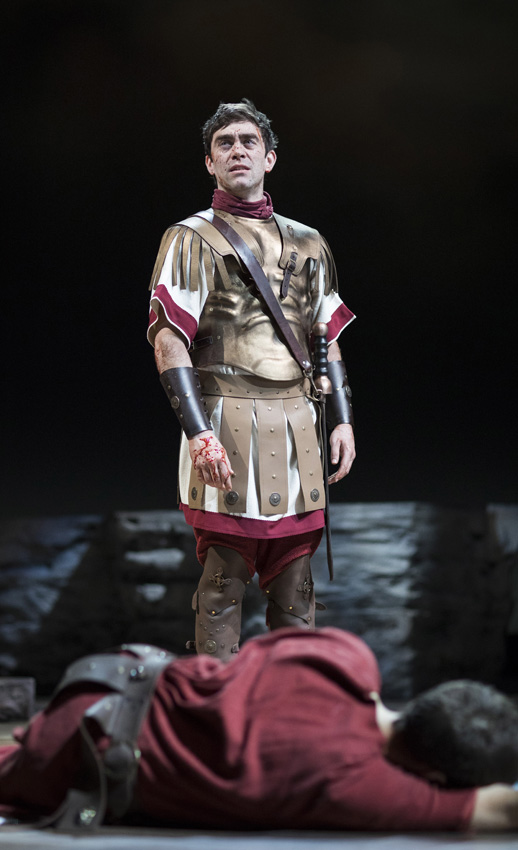 The play is about power and the abuses of power and is one of the best political thrillers ever written. Instantly accessible, it has always been popular and so long as there are bloody coups, assassinations, rampaging mobs and wars, it will always be topical.

Angus Jackson’s lucid production, staged in togas and in its correct period, 44BCE, is totally gripping.

The actual murder is a truly a bloody mess, a savage spectacle, performed by butchers.

At least 60 senators were involved in the assassination of Caesar. According to the historian Suetonius there were 23 dagger thrusts.

“Liberty! Freedom! Tyranny is dead!” cry the conspirators. How ironic! Tyranny is not dead. Rome will soon be ruled by Tiberius, Caligula and Nero.

Brutus, an idealist and, an honourable man, slays Caesar for the good of Rome because he is genuinely worried that Caesar is turning Rome into a dictatorship. But it is hard to believe that Alex Waldman’s Brutus would have the authority to be able to rally the conspirators round him.

The person with the charisma is Mark Antony (James Corrigan) who has a great entrance after the assassination when he just stands there and there is a long pause before he says anything. The most affecting moment is when he struggles to lift the dead body of Caesar and fails, the dead weight being too heavy for him.

It’s exciting to watch Corrigan in action, whipping up the crowd to mutiny. Antony’s reading of Caesar’s will (which leaves the citizens of Rome the emperor’s walks and arbours) is a master-stroke; and even more so in this production when it is revealed to the audience that the will he is reading is a totally blank scroll.

Angus Jackson adds a new scene in which Lucius (Brutus’s boy servant) is brutally killed in battle The audience is audibly shocked, far more shocked than they were by Caesar’s death.