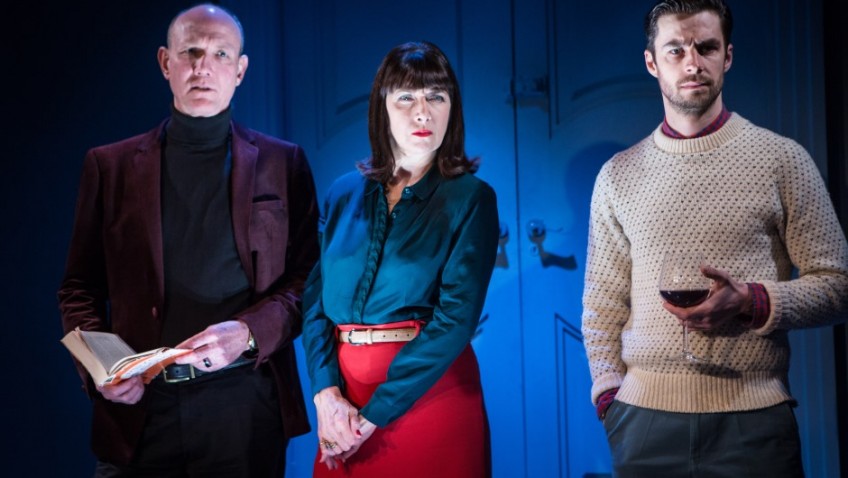 RIGHT NOW had its world premiere in Montreal in 2008 and won an award for best new play by a young author.

Catherine-Anne Toupin, the author, is a Quebecois actress and she wrote the play for herself and acted the mother, a whacking leading role.

A baby cries. Alice (Lindsey Campbell), who is in a dressing-gown, ignores the cries. A man (Sean Biggerstaff) goes off to work. The neighbours, who live in a flat on the same landing, barge in and take over.  Their behaviour is absurd and crude.  What on earth is going on?

Are the neighbours for real? They are farcically intrusive and the actors – Maureen Beattie, Dyfan Dwyfor and Guy Williams – behave like grotesque figures in a cartoon.

Nothing is what it seems. Is there a baby, for instance?  Is Alice the only person who hears the cries?

Is Alice dreaming? Is Alice having a nightmare?  Is Alice losing her grip on reality?

The whole play is a maternal fantasy. She is having hallucinations which overwhelm her hyperactive mind. Anne is suffering from anxiety and chronic depression. So would it be a good idea for a couple who are thinking about having a baby or indeed having a baby soon to see Right Now right now?

I don’t think so. Michael Boys directs a good cast. But Catherine-Anne Toupin’s play, which lasts 80 minutes and is acted straight through without an interval, is pretty irritating.