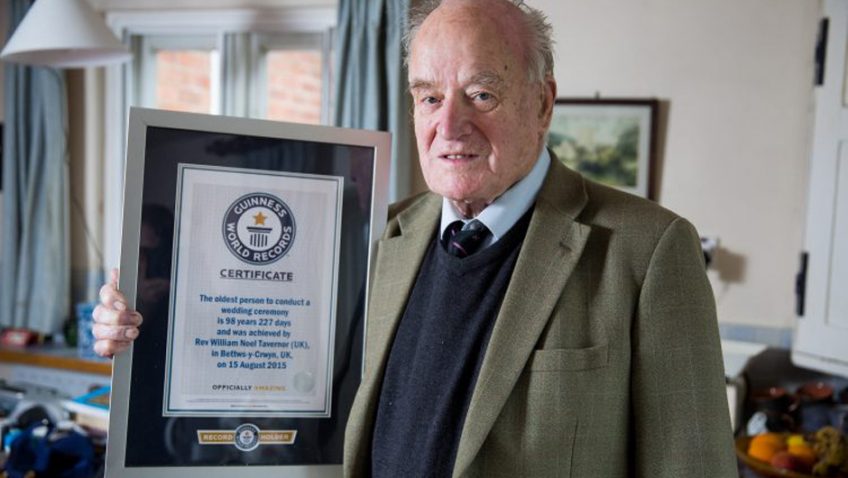 Reverend William Tavernor was ordained at Ledbury Parish Church in December 1941 and has remained a village vicar across the Diocese of Hereford ever since.

The record-breaker even became the oldest minister to conduct a marriage when he wed grandson Jack Tavernor and bride Becky Floate at the age of 98.

Amazingly, he continued to lead prayer services, weddings and funerals at churches using cue cards to jog his memory up until two years ago.

Rev Tavernor was born in 1916 meaning he has lived through 19 Prime Ministers, five monarchs and survived two world wars.

He has also seen the Great Depression and saw historic events such as man’s first journey into space and the sinking of Titanic.

The dad-of-four celebrated the milestone birthday on New Year’s Eve, surrounded by his friends and family, including his seven grandchildren, two great-grandchildren.

The landmark celebration was followed by a special service in Rev Tavernor’s parish church St Michael and All Angels, in Ledbury.

Rev Tavernor admits he can’t exactly recall why he became a vicar, but says it is something he certainly doesn’t regret.

“The family certainly approved of my career, and my father was also ordained later in life.

“Going to church was the thing to do and people were very strong in their beliefs back then.

“I only ever moved out of the area once, to Kidderminster, but that was very brief.

“It was unusual to still to be serving the parish where you were ordained after 70 years. But I really enjoyed the job.

“It’s been very nice to have had a varied life.”

Rev Tavernor went to high school in Walsall, West Mids., before studying at Durham University, and then going on to a theological college in Lichfield, Staffs.

He was ordained in 1941, and has tended to his parishioners and his glebeland within the Hereford diocese for most of his priesthood.

The vicar only ventured outside of his beloved Herefordshire diocese once, spending just three years of the 75 at a country church near Kidderminster, Worcs.

He spent seven years as vicar at Upton Bishop, eight years at Aymestrey and 23 years in Canon Pyon.

Rev Tavernor has since enjoyed 25 years of “working retirement” helping in Kingsland.

He even returned to his old parish 18 months ago in Bettws-y-Crwyn, Shrops., to conduct the marriage of Jack, 35 and Becky, 35.

And the family were amazed to find a 1928 prayer book Rev Tavernor had left behind more than 70 years earlier placed on the lectern.

But he didn’t take up that profession until the 1950s, after his first wife Daisy Roden had passed away in 1953 from scarlet fever.

Later, he was introduced to Vida Stanley Jones, who was to become his second wife, and the pair were married for 50 years until she passed away in 2006.

The son of a Staffordshire farmer, Rev Tavernor drew on his love of the land to farm the glebeland which traditionally accompanied an incumbent’s parish.

He said: “I was the last of a dying breed. I was known as ‘The Farming Parson’.

“I was the last priest to farm his own glebeland. Farming was inbred in me, and two of my children have gone into farming.

“It brought in the extra cash that I needed.

“In those days vicars were paid a very low salary, about £300 a year. We weren’t paid expenses either, and there was lots to do around the parish.”

While in post-war Bettws-y-Crwyn, he recalled the “abominably bad” winter of 1947 when vicar and parishioners were snowbound for 12 weeks.

He added: “That’s what started the farming. I bought some Hereford cross cattle and began farming.”

Rev Tavernor said he still enjoys daily walks and has revealed his secret for a long and healthy life.

He explained: “When I boil up my vegetables, cabbages and carrots, I drink the water.”