Home / LIFESTYLE / REVIEWS > / THEATRE REVIEWS / How should we react globally to those whose views and faces we don’t like? 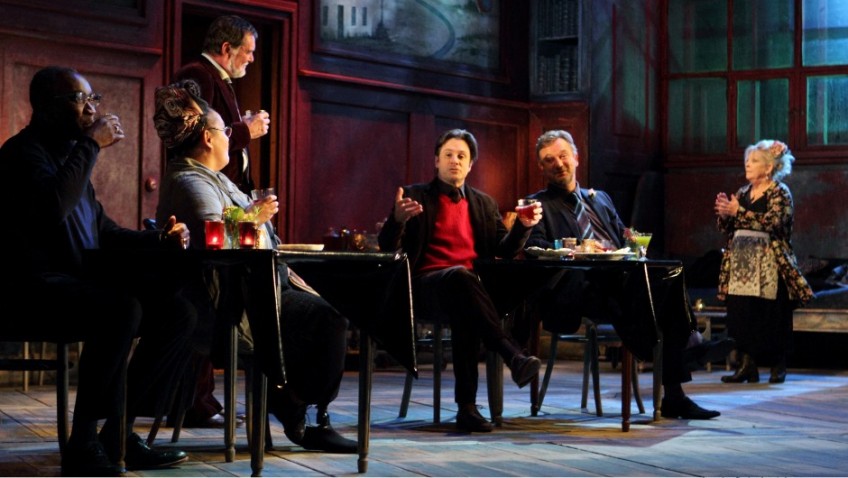 How should we react globally to those whose views and faces we don’t like?

American actor-playwright Wallace Shawn has written a potentially interesting but flawed play about a group of theatrical friends who come together after a ten year absence. The reunion takes place in an old-fashioned club they used to frequent.

The meeting renews old friendships and old animosities.  But it’s not just about show business.  Actually, what Shawn is writing about is government sponsored killing of people whose views and faces the government doesn’t like.

It’s the casual way the characters accept the killing as if it were the most normal thing in the world, given the present day circumstances. Evening at the Talk House

Wallace Shawn appears in his play as an old actor gone to seed and who has already been beaten up. Who else is on the hit list?

Josh Hamilton is the playwright, who isn’t as pleasant as you first think he is.  Naomi Wirthner is the wardrobe mistress who suddenly takes the play in another direction.

Anna Calder-Marshall runs the club in a motherly sort of way. Sinead Matthews is an actress whose career never got off the ground and she has reverted to being a waitress after a spell abroad.

Ian Rickson directs with real flair, except for the final minutes which leave the audience up in the air, uncertain whether the play is finished or not.