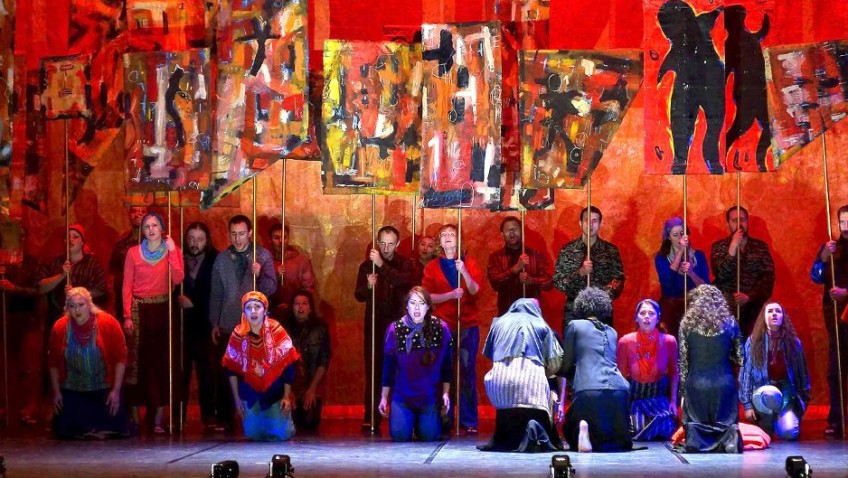 A re-working of a rarely seen Purcell by Peter Sellars

Purcell died in 1695 (he was only 36) before he had finished his adapation of the play by John Dryden and Robert Howard, which had delighted Restoration audiences with its exotic costumes and exotic scenery.

Purcell’s brother, Daniel, completed it. The songs and masques were first performed in 1669

American director Peter Sellars has ditched Daniel’s work and added instead texts from a novel, The Last Chronicle of Terra Firms by Rosario Aguilar. The text is lushly narrated by Maritxell Carrero and tells how the Indian Queen marries a Spanish commander and the Spanish massacre the Mayans.

Sellars has also added other religious and secular songs by Purcell. The semi-opera now been extended to three and a half hours.

The production, which has already been seen in Russia and Spain, opens with five dances depicting Mayan creations.

There is decor by graffiti artist Gronk which rises and falls as if they were an exhibition of his work. There is choreography for four dancers and semaphore for everybody else.

Sellars’ re-working is not as accessible as I had hoped.  I concentrated on the music and the singing.

I enjoyed the singing of Lucy Crowe, Julia Bullock, Noah Stewart and the counter tenors, Vince Yi and Anthony Roth Costanzo. The orchestra (on a raised pit) is conducted by Laurence Cummings.

Purcell is sublime. The production is not.