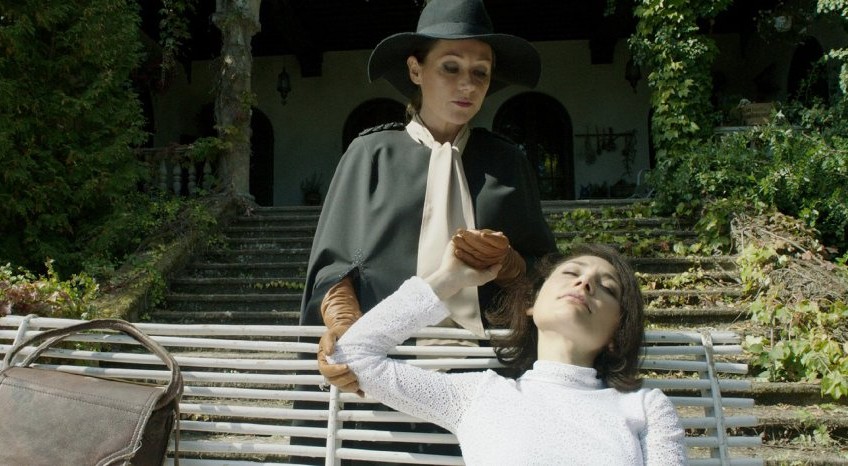 Full of surprises un The Duke of Burgandy

With his third feature, The Duke of Burgundy, British Writer/Director Peter Strickland makes it pretty clear that it is impossible to predict what subject matter or genre he will tackle next, but that you can expect the film to be exquisitely crafted and set in some central European country.  After the revenge tale Katalin Varga set in a timeless Transylvania, and the psychological thriller Berberian Sound Studio set in 1970s Italy, we get a disarming film about a love relationship film that has nothing to do with Burgundy or a Duke.

The Duke of Burgundy is about forms of control and submission in sexual relationships and how we strive to fulfil our partner’s image of us. While the story is particular to one couple, it gives us a surprising insight into the compromises, challenges and hard work that goes into sustaining a loving relationship.  Shot in accented English, and set in the outskirts of some identified central European city (it was shot in Hungary) at an unspecified time, it is Strickland’s best film to date, and one of the best films of the year. But the Duke of Burgundy is probably not one that you would seek out from a summary alone.

When the film opens a demure young woman rides her bicycle to an ivy-covered, brick villa at the outskirts of town and rings the bell.  A stern looking older woman gradually opens the door and, from her armchair where she reads a book, directs the young woman’s cleaning work.  After scrubbing the floor and cleaning the house, the young woman signals she is going home. The older woman, who we assume is her employer, tells the cleaner that she cannot leave until undergarments are hand washed.  When the employer inspects, she finds a pair of knickers has been forgotten and is furious. The younger woman assures her employer that she will wash the garment immediately.  The answer is that it is too late and the younger woman must be punished severely.

This ritual, we gradually learn, is played out on a regular basis, but the women, who live together like a married couple, are playing against type.  The woman who is controlling the ritual is the masochist, Evelyn, a slightly spoilt, obsessive and unreserved fantasist who seems incapable of having a sexual relationship without the games she creates and the apparatus she needs to support them. There is a funny scene in which the couple are visited by a saleswoman who tells them that a torture bed Evelyn wants as a gift will not be deliverable for Evelyn’s birthday due to the high demand.

Cynthia on the other hand, is not so much the sadist, as the partner who goes along with the rituals and fantasies to keep Evelyn happy and interested. Repetition is a hallmark of this film, but Cynthia’s taskmaster role changes slightly each time we see it.  As the story progresses, she falls out of character and even stumbles with her lines.  Finally Cynthia admits to Evelyn that she would rather be in her comfortable pyjamas than dressed in the tight, uncomfortable sex clothing that Evelyn designs for her.

Evelyn’s insatiable demands on Cynthia create the film’s tension, a tension as subtle and gradual as the self-destruction of any relationship. There is something theatrical about the ritualistic scenes, and disarming in Cynthia’s vulnerability.   Strickland creates such an imposing atmosphere and explores this relationship so stylishly, that you find yourself mesmerized by the sound and images. You find yourself willingly drawn into an increasingly familiar relationship though somewhere outside of your comfort zone.