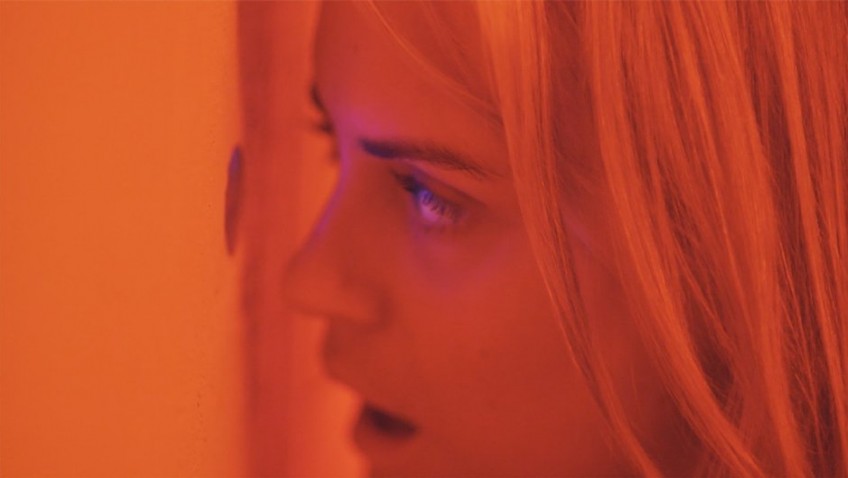 The Overnight is a sex comedy that has more going for it than you might expect from Mumblecore/Verité Kings Jay and Mark Duplass, who produce; and actor-turned Writer/Director, Patrick Brice (Creep) in his theatrical feature debut. Two very different 30-something couples, each with a young son, have dinner together and the foursome become much more than neighbours. Just when you think you’ve seen this film before Brice confounds our expectations and continues to do so. His aim is to make us as uncomfortable as the dinner guests, Alex (Adam Scott) and Emily (Taylor Schilling), but the unpredictable twists cannot hide the superficiality of the discoveries.

Alex (Adam Scott) and Emily (Taylor Schilling) are new to LA, but loneliness is not their only problem. Along with their belongings and a young son, they arrive in LA with their sexual frustrations. Secretly the faithful, loving Emily dreams about making love to another man, while self-conscious house-husband Alex agonises over the size of his penis. When, on their first day in the local park, out-going, self-assured Kurt (Jason Schwartzman), invites them over to dinner as a play date for their sons, Alex and Emily are elated.

Arriving at the given address, Alex and Emily are slightly intimidated by the large, expensive house that they did not associate with the laid-back Kurt. They are introduced to Kurt’s beautiful, French wife Charlotte (Judith Godrèche) and enjoy dinner where the charismatic Kurt dominates the conversation.  When Kurt and Charlotte suggest the two young boys go off to bed so the couples can socialise a bit more, Alex and Emily hesitate, but eventually agree.

It is at this point that the tension, already built in to this encounter, rises as Alex and Emily learn more about this mysterious couple. Their wealth comes in part from the couple’s strange business, with Kurt showing Alex and Emily a video of his wife’s exposed breasts, as though she were not in the room. Alex and Emily are embarrassed for her, but Charlotte simply smiles, albeit slightly awkwardly. Later in the evening the couple discover Kurt’s sideline business, selling close up photos of a certain intimate body part that all human’s share.

Alex is drawn into posing when Emily and Charlotte interrupt. When Kurt and Charlotte strip for a dip in the pool, Emily remains clothed in solidarity with the mortified Alex. As Kurt sets to work to cure Alex’s hang-up, Charlotte takes Emily with her on a bogus errand via a message parlour where, to Emily’s shock, Charlotte gets her kicks.

Just when you are rooting for Alex and Emily to beat it, Kurt and Charlotte transform from Svengalis into liberating healers and you begin to question what role your own inhibitions play in your feelings towards the goings on. While Brice keeps the action moving, it could not have lasted another minute. During the strained and unconvincing final segment The Overnight feels like a movie that has overstayed its welcome.