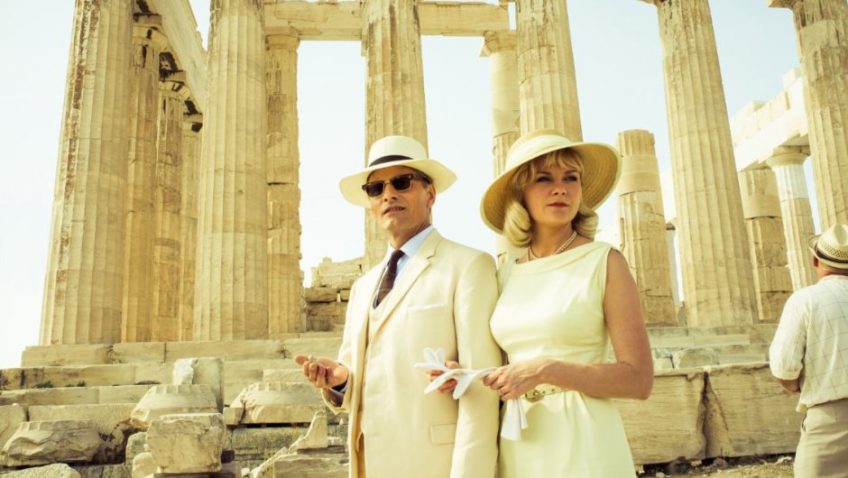 A satisfying psychological thriller of The Two Faces of January

If you want to see a good, old-fashioned, character-driven, psychological thriller, The Two Faces of January should be top of your list.  Based on the 1964 novel by Patricia Highsmith, if this film reminds you of a Hitchcockian thriller it might be because Hitchcock turned Highsmith’s early novel, Stranger on a Train into a cinema classic.

Both René Clément and the late Antony Minghella adapted another of Highsmith’s sinister crime novels, The Talented Mr Ripley In 1955 and 1999 respectively.   If The Two Faces of January is a lesser work, it is transformed into a cohesive, absorbing drama by scriptwriter (Drive, Wings of the Dove) Hossein Amini, making his directorial debut.

Set in three of the more photogenic tourist destinations in the world – Athens, Crete and Istanbul – in 1962, The Two Faces of January is not only a thriller, but a love triangle.  The well-dressed, handsome and charismatic 40-something American investment broker Chester Macfarland (Viggo Mortensen) is touring the Parthenon with his enticing 20-something wife Colette (Kirsten Dunst). They are being watched by an attractive, young multi-lingual American tour-guide, Rydal (Oscar Isaac) who is entertaining a besotted, wealthy tourist (Lucy Bevin).

But Rydal is distracted by both Chester, who looks like his estranged, recently-deceased father, and Colette, who resembles an old flame.  Patricia Highsmith is not, however, interested in ordinary love triangles. At its core is an unlikely father-son relationship that is as psychologically credible, complex and subtle as any of the male relationships in the Highsmith canon.

It is challenging to write about this film without spoiling the surprises that unravel at an accelerating pace before settling down while the intimate relationship between the three characters unfolds.  It’s safe to say that no one is who they seem and all three of the characters have obvious, as well as hidden, motives for their actions.  Rydal is handed a big clue about Chester when he returns a bracelet Colette had left in the taxi to their hotel room, surprising Chester in the corridor of the luxury hotel.

Along with Rydal’s citing of Greek mythology, that bracelet is also a device that Hossein invents to foreshadow events or give his film a touch of irony. Rydal, who negotiates the price for the bracelet at the market, tells the couple that it is a charm to protect and ensure a long life.

The title is one of several references to the father-son relationship that Hossein retains from the novel, although he creates several new and cinematic references, too.  Janus is the Roman (the Greeks had no equivalent) god of beginnings – hence, January –whose two heads were bound together but facing different directions, a bit like Chester and Rydal.

Those who have read the book, or are now inclined to do so, will admire the creativity and skill in Hossein’s adaptation. He has increased the tension and suspense in the opening, tightened the rather rambling second half and made the characters more interesting and sympathetic.

Instead of letter writing and an omnipotent narrator to develop the relationship between Rydal and Chester, Hossein turns the novel’s unemployed, honest but mysterious law student into a charming, opportunistic conman, one who could help you obtain a false passport.  Highsmith never explains how her Rydal would have cultivated such shady contacts, despite his fluent Greek.

At a press conference, Viggo Mortensen spoke of the layers of detail that unfold after a second viewing of the film, and he is right.  In addition to the beautiful locations, 1962 costumes and mobile phone-free plot, we can admire the nuances in the performances that create three dimensional characters.

Hossein was lucky to grab Oscar Isaac just before his starring role in Inside Llewelyn Davis catapulted him onto the Hollywood A list. In Llewelyn Davis Isaac sang beautifully and played the guitar; here he speaks near perfect Greek (there’s no dubbing).  Mortensen claims that he modelled his character after similar real-life people from the 1960s.

His Chester is a far cry from the more contemporary Wolf of Wall Street, although he shares with that swindler a humble beginning and addiction to alcohol. The wonder of this adaptation is that we find ourselves feeling drawn to a strangely childlike and vulnerable Chester, while welcoming the film’s satisfying ending.