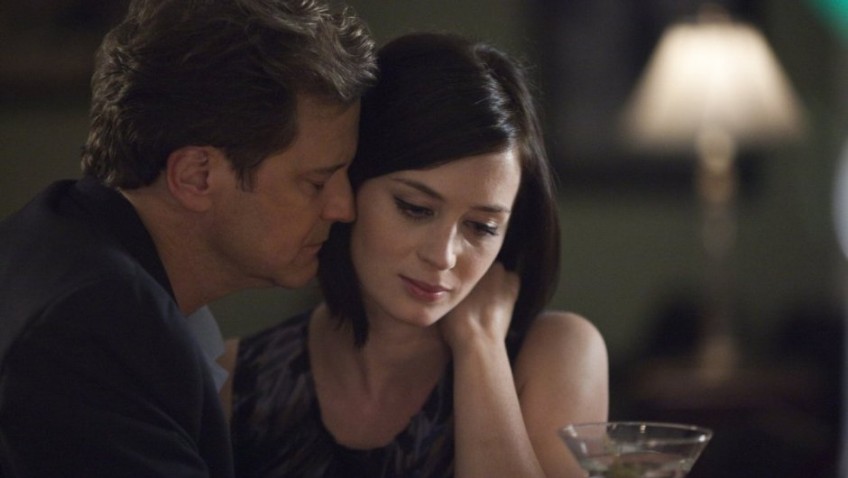 Colin Firth and Emily Blunt star in Arthur and Mike

You might think that a handsome actor with a CBE, an Academy Award, a BAFTA, a Golden Globe and three Screen Actor’s Guild awards could be a bit more selective in his choice of films.  Emily Blunt (The Devil Wears Prada) is not doing too badly either, having just co-starred with Tom Cruise in his latest blockbuster, Edge of Tomorrow.  Yet off go these two British actors to play unhinged American lovers in Dante Ariola’s insufferable Arthur and Mike.

Middle-aged and divorced, Wallis Avery (Firth) fakes his death buys a new identity as Arthur J Newman to escape his past.  Once a promising golf pro, Avery is now stuck in a boring office job and estranged from his 13-year-old son Kevin (Lucas Hedges) and his anemic girlfriend (Anne Heche).

The last person who should be going on a road trip with Avery/Arthur is suicidal Charlotte Fitzgerald (Emily Blunt). This is not only because he is a fifty-something stranger, and she is a vulnerable 30-year-old woman – which is perfectly normal in movies – but because she is Trouble.

Then again, they do have two things in common.  Charlotte has also adopted a false identity, (as one does); that of her twin sister Michaela (Mike), who is a hospitalised schizophrenic. And Charlotte/Mike has also runaway from her screwed up past and responsibilities towards her only living relative.  So from the moment they meet, you know the ending.  If this sounds like a spoiler, there is a fine line here between spoiling and forewarning as a public service.

What you don’t know, and could never imagine, is how the couple spends their time in-between the slow, messy beginning and the too tidy ending.  Charlotte did not have to fake her sister’s identity as she is borderline bonkers in her own right. Charlotte/Mike drags the besotted Avery/Arthur into a sick game of breaking into middle-class homes, and stealing the owners’ identity for the time it takes to dress up and enjoy kinky sex in someone else’s bed.

Eventually, in a messy climax, their artificial high comes to a crashing conclusion when Avery/Arthur shows up at his unlikely new job at a golf club.  Charlotte/Mike introduces herself to Avary/Arthur’s new boss as his whore, which she thinks is cute. And why not, as there is no chance of the audience believing either character or anything they say and do?

Just as baffling as the choice of film project for Firth and Blunt is scriptwriter Becky Johnston’s unfathomable road movie/romcom.  Johnston’s career is as schizophrenic as her characters. Her script for Under the Cherry Moon was awarded a Razzie for the worst screenplay of the year in 1986, while her 1991 screenplay for The Prince of Tides was nominated for an Academy Award.  Arthur and Mike will surely be the favourite for another Razzie this year.

Readers may remember the legendary mascot of Mad Magazine, Alfred E. Neuman, so reminiscent of Arthur J Newman that it cannot be a coincidence. Anyone reminded of this when watching Arthur and Mike is sure to wonder whether the joke is on Avery or on the paying public.