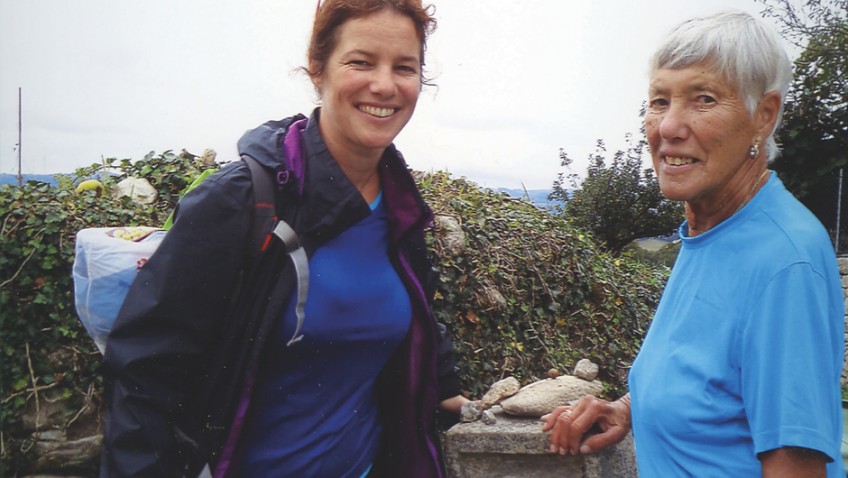 A grandmother proved age is only a number when she trekked nearly 500 miles across Spain – just for the fun of it.

Elena Mansell, 82, walked over 25 miles a day, completing the challenge in less than a month.

After finishing the Camino de Santiago walk with her granddaughter Carla, she described it as “the experience of a lifetime”.

Elena said: “Carla lives and works in Spain as a teacher and because I’m a keen walker she just asked me if I fancied doing it.

“At first I was only going to do 100km but then I thought I probably won’t get many chances to do this sort of thing so I said let’s do the whole thing.

“Lots of people take loads with them but we decided to just take a few clothes and the bare essentials.

“We didn’t plan or book anything, we just started walking and worked out where to stop along the way.”

The Camino de Santiago pilgrimage leads to the shrine of the apostle St James the Great in the Cathedral of Santiago de Compostela in Galicia, north-western Spain, where tradition has it that the remains of the saint are buried.

Many take up this route as a form of spiritual path or retreat for their spiritual growth.

Keen ramblers Elena and Carla, 33, began their journey from Pamplona in the north east and made their way through the country until they reached Santiago, in the north west close to Galicia.

The pair stayed in hostels, or albergues as they are referred to in Spain, which they booked by walking in and asking for vacancies.

They began the trek on August 28 and finished a month later on September 27, having travelled through hundreds of towns and villages.

But Elena, who lives in Garstang, Lancs., although her family originate from Italy, said she thought her age only helped her on the walk.

She said: “There were loads of big burly men dropping like flies because of injuries but I didn’t understand what they were complaining about.

“I had a couple of blisters throughout the whole walk even though it was very different from walking in Lancashire as the roads are so gravelly.

“We walked from around 6am until 2pm, mainly because of the heat and then just sunbathed and explored after that.”

Along the route, Elena made a name for herself ‘grandma of the camino’ and would be stopped by people who recognised her.

“It was funny being known as the grandma of the camino and people would recognise me and tag along,” she said.

“When we were staying in the albergues we had French, Italian and Spanish men offering to cook us food which was great.

“The adventure was amazing but it’s something I won’t be doing again and I’m really glad to be home.”