Home / LIFESTYLE / REVIEWS > / FILM REVIEWS / This is not a paper thin coming-of-age film, but it’s not ground-breaking either 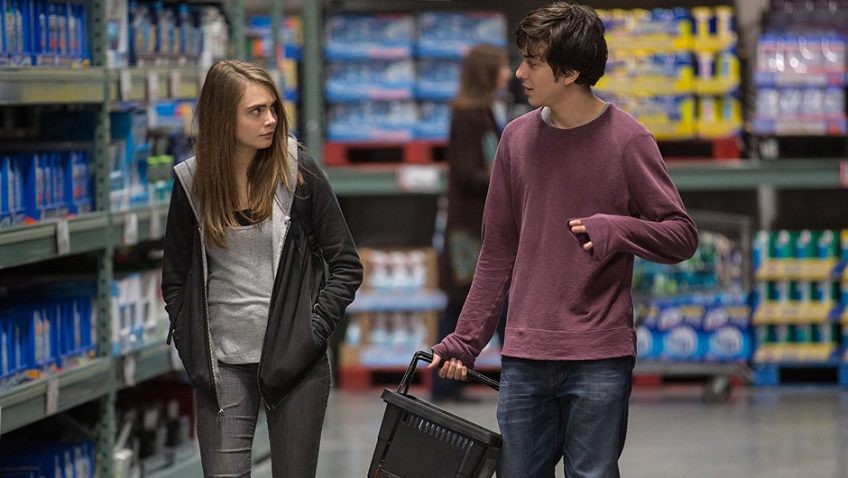 This is not a paper thin coming-of-age film, but it’s not ground-breaking either

Top model and cover girl Cara Delevingne, who is 22, gets top billing in Paper Towns

, but it is really 20-year-old Nat Wolff who carries this earnest but not particularly ground-breaking coming-of-age movie which his character, high school senior Quentin Jacobsen, narrates. With the exception of a few silent shots, Delevingne appears in one twenty-minute sequence and then disappears until the last, brief scene of the film.

The Executive Producers behind Paper Towns

, who include the two script writers, Scott Neustadter and Michael H Weber, and the novel Paper Towns

’ author, John Green, reunite in an attempt to repeat the success of their hit teen weepie, The Fault in Our Stars. Nat Wolff, who played the lead couple’s blind friend in The Fault in Our Stars, is bumped up to lead man here, and Jake Schreier, who directed the bitter-sweet old age drama Robot and Frank directs. Quentin (Wolff) tells us that from the moment he saw his new neighbour, Margo (Delevingne) he was ‘hopelessly in love’ and that ‘for some reason we became friends.’ But with age, they grew apart, as teenagers do, and by the time they are seniors in high school, they barely speak to one another. While Margo appears to be Ms Popularity, dating the most handsome boy in the class, Quentin focuses on academics and extra curricula activities. Unlike Margo, however, Quentin has real friends, Ben (Austin Abrams) and Radar (Justice Smithand), who might be described as nerdy were they no so cute.

Then one night Margo literally destroys Quentin’s sleep with an S.O.S. that only a quirky, free-spirited character could mastermind. She wants Quentin to help her enact revenge on her boyfriend who cheated on her and her best girlfriend who betrayed her. Mindful of the university awaiting him (where he hopes to fine a girlfriend), Quentin is reluctant to get involved. He is, however, still hopelessly in love and goes along with Margo’s innocent breaking and entering and reversible property damage rampage. To celebrate their success, she uses her charm to get them into Orlando’s tallest building, the Sun Trust Bank HQ, where they dance and she talks about paper towns.

Quentin convinces himself that it was the best night of his life. How wonderful to go on a daring adventure with such an exciting, carefree girl! Then Margo disappears, and while her mother does not appear overly concerned, Quentin painstakingly follows what he believes are little clues she has left to her destination in New York State.  Out of solidarity, Quentin’s two best friends and their prom dates (one of whom is Margo’s best friend, Lacey), agree to accompany Quentin on the road trip providing they get back in time for the senior prom. There are two aspects of Paper Towns

that distinguish it from other coming-of-age films. First, there is the credible camaraderie between Quentin and his friends who are turned into three-dimensional characters. The road trip doubles as a touching farewell to youth as the three childhood friends realise they are heading off to different parts of the country and pastures new.

Then there is the character of Quentin himself, who, unusually, never really believes that someone like Margo could make him happy for long. She provides a diversion from his regimented student life, but, in the end, she is someone to pity more than admire. Quentin seems to know that he could not live with a manic, unstable girl ‘whose life was a series of adventures and wherever she went she’d leave clues behind…’ for others to follow. The film allows us to feel that we’ve all met someone like Margo.

What is less clear is the use of the metaphor of paper towns. A paper town is a made up place on a map used to catch-out copyright infringers. In the novel it’s clear that Quentin is going to a paper town in New York to try to make a paper girl real, and this is also the case in the film. But during their big night out together Margo complains that Orlando is an ugly place, a paper town with paper people who do not care about anything. This is not, however, borne out by characters we meet who seem to care about a lot of things and are very genuine. When we meet Margo’s best friend, Lacey (Halston Sage), who allegedly betrayed her, we find a very pretty, intelligent, likeable and vulnerable girl who really cares about Margo’s well being, but is perceptive enough to doubt that Margo could really care about anyone else.

Delevingne looks destined to be type cast as the impossible dream girl and/or the free spirit who looks enviably cool and independent but is really insecure and emotionally troubled. In future films she plays a hard-partying teenager and an artist’s model (which will not be difficult for her), a mermaid and in yet another film, an enchantress. It is no surprise that British director Joe Wright, who berated BAFTA members for not bestowing a Best Actress award on his overrated muse Keira Knightley, has chosen Delevingne to play a mermaid in his upcoming fantasy film Peter Pan.