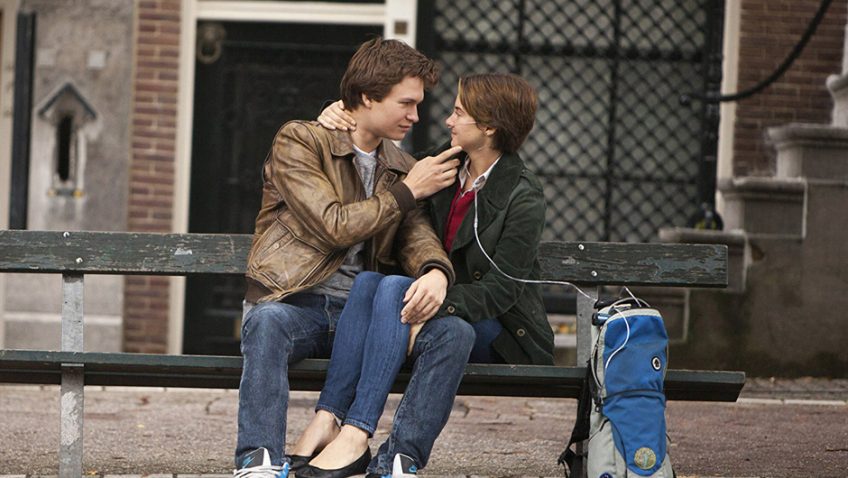 Wishes of endless love in The Fault in the Stars

Ever since Romeo & Juliet, when we associate young people with death it is usually in connection with that ultimate act of defiance and helplessness: suicide. It is supposed to be older people who suffer the long, unromantic, ordeal of terminal diseases like cancer. However young people do suffer from long-term illnesses and Hollywood cannot seem to get enough of mixing slushy teen romance with mawkish stories of terminal disease and funerals.

Most recently, in 2010’s Love and Other Drugs, a handsome Prozac sales rep (Jake Gyllenhaal) falls for a pretty patient (Anne Hathaway) dying of Parkinson’s disease. In 2011’s Restless, teenager Mia Wasikowska has three months to live when she falls in love with a weird young man who is already obsessed with death.

Then came 2012’s Now is Good, in which Dakota Fanning plays a teenager dying of leukaemia whose bucket list includes finding love.  And now we have The Fault in our Stars adapted from John Green’s best-selling novel  by Scott Neustadter and Michael H Weber (500 Days of Summer) and directed by Josh Boone (Stuck in Love).

The film is narrated by Hazel Grace Lancaster (Shailene Woodley, Divergent, The Descendants), a pretty, skinny 16-year-old middle-class girl from Indiana (the film was shot in Pittsburgh). She drags around an oxygen tank attached to her nose by a transparent hose to help her breathe.  Hazel forthrightly corrects the received wisdom that depression is a side effect of cancer: ‘it’s a side effect of dying and that’s what’s happening to me.’

To please her doting mother (Laura Dern) Hazel attends a cancer support group, and of course, mother knows best. In walks a handsome, healthy-looking, 18-year-old former basketball star, Augustus ‘Gus’ Waters (Ansel Elgort) with a twinkle in his eye that freezes on Hazel.  When he tells her she looks like Natalie Portman in ‘V for Vendetta,’ that is his way of telling her she is beautiful. Gus had his leg amputated to stop the spread of cancer.  He wears an amazingly flexible artificial leg that Elgort and director Boone frequently forget about.

The story hinges on An Imperial Affliction, a book that Hazel considers to be the only account of dying from cancer with which she can relate.  To express his love for Hazel, Gus arranges for the two of them to visit author Peter Van Houten (Willem Dafoe) in Amsterdam so that Hazel can ask him about the ending, and ‘the end’.  Hazel’s obliging parents insist on chaperoning, but Amsterdam turns out to be the closest the two will come to a honeymoon. Shailene Woodley and Ansel Elgort in The Fault in Our Stars

No thanks to Peter Van Houten. He turns out to be an inhospitable, bitter drunk whose secretary (Lotte Verbeek) invited the young couple and paid for their gourmet dinner.  In fact Van Houten is not really nasty, he simply deals with pain differently, but Hazel cannot know that.  She is so resentful that she never forgives Van Houten, cutting him off and dismissing him when he improbably flies to Indiana to answer her questions about the book.

With a choice between the Van Gogh Museum and the Anne Frank House there isn’t much to cheer up two disillusioned teenage tourists dying of cancer in Amsterdam.  Unfortunately, they choose the latter and start to snog when they hit Anne’s bedroom.  This being a teen romance/fantasy, the other tourists start to applaud this breach of taste and respect.  Adults in the audience can only cringe. The reaction of the bystanders is all the more implausible as they would not know the couple’s circumstances or that this is their first kiss.

Just when things are looking up, the film turns more mawkish with mutual friend Isaac (Mat Wolff) going blind – I am not making it up – and some more bad news for Gus.  Curiously, the redemptive visit from Van Houten serves no purpose. Hazel stubbornly, and rather annoyingly, refuses to listen to him; and, despite having flown thousands of miles to read a eulogy that he helped write, he never does.

What saves The Fault in our Stars

, which seems to contradict the famous line from Shakespeare’s Julius Caesar, is Elgort’s terrific, breakthrough performance and the chemistry between him and Woodley (also talented).  Elgort, Woodley and their audience’s unquenchable thirst for tales of doomed love have already made the film a box office hit.