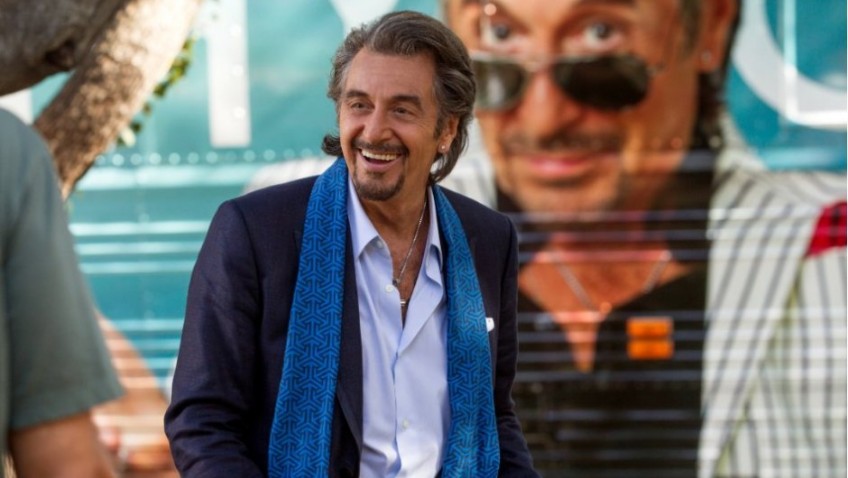 Pacino puts in a towering performance sparkling with nuance, energy and wit

Since Al Pacino (Scarface, The Godfather films, Dog Day Afternoon, Serpico) has turned 60 the Academy Award nominations (he won an Oscar for Scent of a Woman) and the quality of the roles he has been taking on have diminished.

Pacino, who is 75, joins a long list of older actors who do not wish to retire. The 2013 film Last Vegas, starring Michael Douglas, De Niro, Morgan Freeman and Kevin Kline was a critical disaster, although the cast and title ensured it was a box office success.

Now Pacino is back playing the eponymous aging folk/pop star in Danny Collins. Danny Collins is the directorial debut of Dan Fogelman who wrote the scripts for Last Vegas and the harshly judged Barbra Streisand comeback comedy Guilt Trip.

We have seen aging rock star films before, but the novelty here is that Danny Collins is based on a true occurrence.  In 1971, Steve Tilson, a promising folk singer, expressed in an interview a fear that money would corrupt his talent.

John Lennon and Yoko Ono read this confession in a music magazine and wrote to Tilson, in care of the magazine’s interviewer, offering help and providing their telephone number.

Unfortunately for Tilson, it took 40 years for the letter to reach him.  You have to stay for the end credits to understand the full implications of a humorous caption at the film’s start.

As the title suggests, Pacino carries the film, sharing the spotlight with only two supporting actors over 55, a miscast Christopher Plummer (age 85), as his loyal manager/agent, and an awkward Annette Bening, 57, a suburban hotel manager who is his nearly ‘age appropriate’ love interest.

Pacino is terrific as the world-weary Collins strapping on a girdle over his pot-belly, applying tanning lotion and snorting cocaine to prepare him for another disheartening performance. He is now reduced to belting out golden oldies to a crowd of women over 50 bent on recapturing their youth.

He returns home to his expensive modern house in his expensive sports car where his 20-something bimbo fiancée (shaving her crotch in the shower) is about to give him a surprise birthday party.

Frank’s manager, and life long friend, Frank (Christopher Plummer), reflect on the bash the following morning as they sit by the pool. Danny admits that he looks ridiculous with his fiancée and that he’ll have to get a pre-nup.

Then Frank gives Danny a gift that changes his life: he has purchased at auction a letter from John Lenin that was destined for Danny 40 years earlier but was retained by his interviewer who has recently died.

Haunted by the spectre of what could have been, Danny leaves his girlfriend (who he knows is sleeping with the gardener) with his house and credit card and pulls into the Holiday Inn, Hillcrest New Jersey in a flashy red sports car.

The valet Nicky (Josh Peck) and the receptionist  Jamie (Melissa Benoist), college students used to customers from dental conventions,  cannot believe their eyes. Nor can Hotel manager Mary Sinclair (Bening), who the ebullient Danny invites to dinner after suggesting that Nicky and Jamie, who he wants to fix up, take a drive in his car.

When Frank shows up he is not happy to hear that Danny, whose money is drying up, is cancelling the lucrative tour. ‘I’m a court jester in a microphone’ Danny explains. ‘I was the real thing once. I haven’t written a song in 30 years.’  When Frank tells Danny that he’s having a breakdown, Danny confesses: ‘I’ve been having a breakdown for 40 years.’

The reason Danny has chosen this modest hotel in the middle of nowhere is redemption.  He even uses the word.  Against all odds, he wants to make amends with his estranged son Tom (Bobby Cannavale), the product of a one night stand with a groupie. Tom is now a construction worker living in Hillcrest.

Danny shows up at Tom’s house where Tom’s pregnant wife Samantha (Jennifer Garner), and her adorable daughter Hope (Giselle Eisenberg), shocked to see him, are clear that he should leave before Tom returns.

When Danny discovers that his granddaughter has ADHD, he uses his money to win a reprieve from the sceptical Tom enrolling Hope in an expensive school in NYC and ensuring limousine service to get her there. He also makes himself indispensable when he learns that Tom is very ill, and has not told Samantha.

Fogelman’s script contains enough surprises, laughs and emotional truisms to make up for the clichés and references (the flirtatious sparing between Danny and hotel manager Mary is reminiscent of that between hotel guests Clooney and Vera Farmiga in Up in the Air).  He also keeps the sentimentality, inherent in Tom’s illness at a bearable level.

It is Pacino’s towering performance, however, sparkling with nuance, energy, wit and self-deprecating truisms, that melts down your resistance to a film that never rings true.

Unfortunately for Pacino, who just about gets away with it, Collins’ new song, that Mary Sinclair encourages him to write and perform, is a dud and Pacino, who should have been dubbed, cannot sing it.

It’s bad enough that his trademark song is an obvious rip off of Neil Diamond’s Sweet Caroline, but Danny Collins was a folk singer who elsewhere sounds like a cross between Dylan and Rodriquez from Searching for Sugarman.

Danny Collins is a step in the right direction as it gives Pacino a chance to fill the screen with a meaty role that is dignified, age appropriate, yet fun.  But he and all the other talented actors over 60 who still have an audience, need the right platforms to reclaim the box office and the awards.