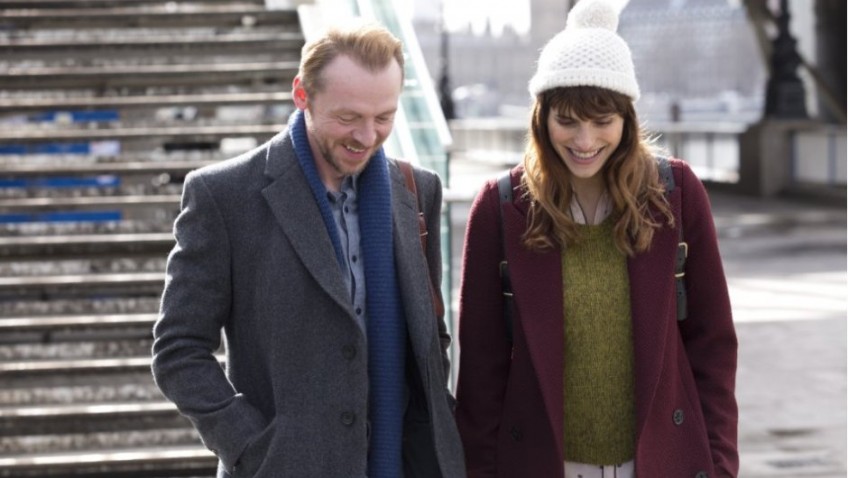 Talented as he is, the star (and co-writer) of such comic hits as Shaun of the Dead and Hot Fuzz cannot claim that romantic roles are his forte.  Anyone who endured last year’s excruciating coming-of-age-romcom Hector and the Search for Happiness might be put off from seeing Man Up.

Fortunately, Director Ben Palmer’s (The Inbetweeners Movie 2011) Man-Up is not about Pegg, but all about the beguiling Lake Bell and a script by Tess Morris that, until the dragged out, ill-judged ending, is a refreshingly witty and original take on modern dating.

The American actress Lake Bell, who wrote, produced, directed and starred in the delightful 1913 comedy In a World, dons an impeccable English accent to play Nancy, a wounded, cynical singleton who endures the usual humilities, loneliness and self-pitying moments that single women in their thirties and forties will identify with.

Nancy uses her independence like armour to protect herself.  She is a well-educated journalist who will never be caught dead with a Self-Help book or anything by Dan Brown.

Well, not until an encounter on a commuter train that leads to a mix up at Waterloo Station when a 40-something, divorced City worker named Jack (Pegg) mistakes Nancy for his blind date.  In a spontaneous moment of madness Nancy finds herself going along with this stranger.

What is behind this uncharacteristic move? Is there something about this Jack that attracts her or is it vengeance on the annoying woman on the train who forces Nancy to embrace a prescriptive best-seller? Perhaps it is Nancy’s journalistic curiosity, or, a subconscious desire to avoid delivering a speech at her parents’ 40th anniversary party that evening.

Regardless of the motives, viewers register that this date starts off on a lie. As we watch Jack and Nancy enjoy a few too many drinks, play games, go bowling and act like silly teenagers, we are reminded to what extent dating is an artificial construct.

Nancy struggles to find the right moment to tell him the truth and Jack, charmed by Nancy’s lack of inhibition, might not want to know it. Morris’s well-observed script gives Bell a platform to show off her goofy, zany and physical humour while Pegg seems fittingly subdued by Bell’s presence, as she is certainly the most unpredictable, natural and original comedienne’s he has played opposite.

At just the right moment, — when Jack and Nancy are really hitting it off – the chameleon-like Rory Kinnear comes along, playing a creepy stalker from Nancy’s school days, to reveal Nancy’s little secret.  One lie is toppled.

Next it is Jack’s turn when his insufferable cheating ex-wife shows up the bar where Jack and Nancy have retreated. With her is the well-heeled new boyfriend who appears rather taken with Nancy.

Jack, who is prone to outbursts of self-pitying tears over his rejection, completely falls apart, and it is Nancy who props him up and turns the tables on the ex-wife.  In the climate of this film there is something off-kilter about portraying the ex- as the stereotypical bitch, particularly when it’s clear that Jack is somewhat of a wimp. In any event, by this point, Nancy and Jack now know a lot more about one another than is healthy for a first date.  Can the relationship survive?

Unfortunately, the answer is spelt out for us in a protracted epilogue that threatens to undermine the rest of the film. First we have to endure a misguided car chase sequence long after Kinnear’s character has overstayed his welcome on screen.

This is followed by an unbearably sentimental, scene at Nancy’s parents’ in which Pegg is given too much time and leeway to tell us what already know.

You can watch the trailer for the film here: