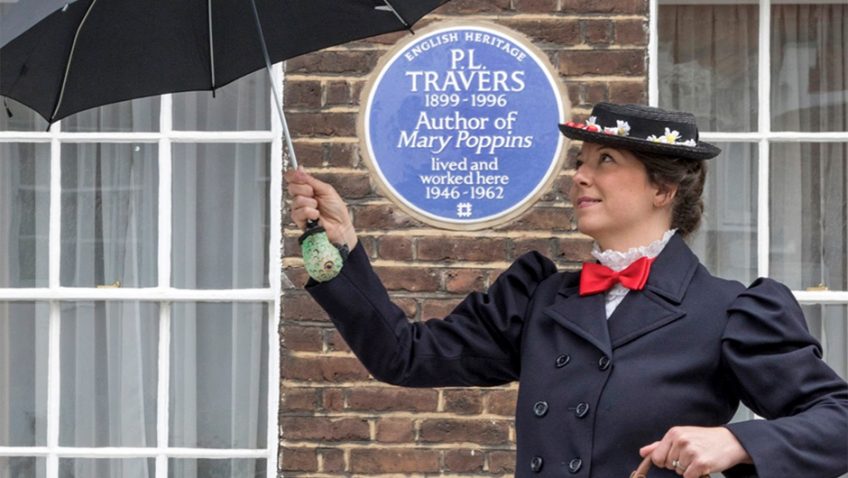 P. L. Travers (1899-1996), author of Mary Poppins, has been commemorated with an English Heritage Blue Plaque, the charity announced on 31st May, London History Day. The plaque was installed at 50 Smith Street in Chelsea, the house where Travers lived for seventeen years and which inspired the depiction of the Banks’s family home in the Disney film.

Best remembered as the creator of ‘the world’s best known nanny’, Mary Poppins, P. L. Travers was born Helen Lyndon Goff in Queensland, Australia in 1899. In 1907 she suffered the loss of her father, Travers Robert Goff, who had instilled a love of myth and poetry in his young daughter but ultimately left her, her siblings and their mother destitute.

Displaying a flair for acting and directing in her teenage years, she began publishing articles and poems, and eventually overcame her family’s objections to become an actress, taking the stage name of Pamela Travers. After falling in love with a journalist from New Zealand, she gave up acting to write for a number of newspapers, and came to England in 1924.

She continued writing in her adopted country, this time under the name of Pamela Lyndon Travers, eventually shortened to P. L. Travers, and was introduced to W. B. Yeats and Bernard Shaw. In 1934, she wrote Mary Poppins – her first literary success – and the subsequent series of eight books were an immediate and enduring hit.

In early 1959, Disney made the ultimately successful offer to produce the film Mary Poppins

. She and Walt Disney had many fraught tussles about Mary’s character; the stern, vain and surprisingly spiritual Mary created by Travers’s was worlds away from the ‘spoon full of sugar’ portrayal of the nanny by Julie Andrews. Disney ultimately sidelined Travers, and she had to actively request an invitation to the film’s premiere! Famously, she was dissatisfied with the film, despite it winning five Oscars, but the 1964 Disney film skyrocketed Mary Poppins, and an unwilling P.L Travers, to international fame. The popularity of her magical character is far from waning, evident by the release of Saving Mr Banks

(2013), starring Emma Thompson as Travers and Tom Hanks as Walt Disney. The release of Mary Poppins Returns later this year, starring Emily Blunt, is sure to draw in a whole new generation to the charms of the nanny ‘practically perfect in every way.’ Continuing to write well into her old age, Travers died at home aged 97.

Howard Spencer, Senior Historian for English Heritage Blue Plaques, said: “The enduring popularity of Mary Poppins is testament to P. L. Travers’s boundless imagination. Although she disapproved of the Disney film, both the magic and portrayal of English domestic life are elements that remained true to her book and really resonated with audiences. We’re pleased to be able to recognise her achievements with a blue plaque on the home where she lived during the negotiations with Disney and which was in her mind’s eye when she told him how the Banks’s family home should look.”