Home / LIFESTYLE / Outstanding in his field 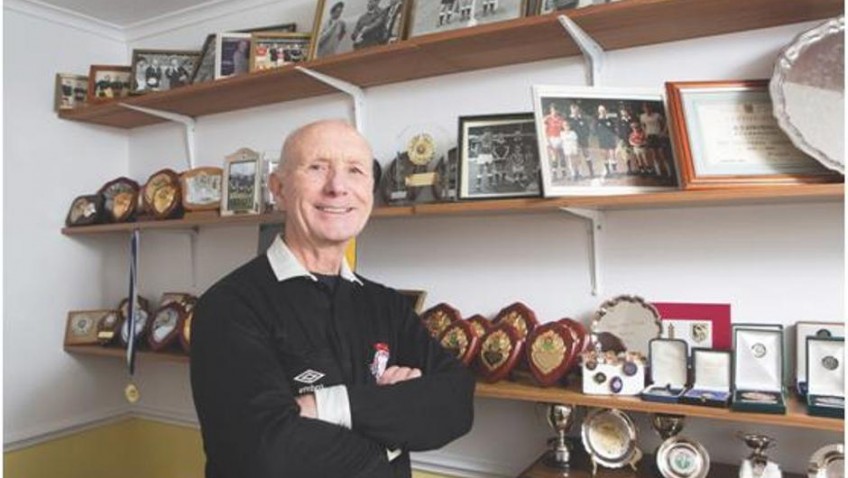 Outstanding in his field

Britain’s longest serving top-level football referee says he has no plans to blow the final whistle after notching up his 3,000th game – at the age of 75.

Sprightly Brian Stevens is still reffing for his local Sunday League teams since taking a break from FA Cup and Premier League games during his 50 year career.

He has been pulling on the black shirt since 1963 and spent an amazing 21 years as an official Football League referee.

During his time in the middle Brian has been in charge of three Wembley finals as well as three major FA Cup upsets.

He has dished out 2,100 bookings and around 1,000 red cards – including sending off Dennis Wise and Andy Gray in the same game.

And with referees clocking up an estimated 7.5 miles per game it means Brian has covered a staggering 19,500 miles on the pitch.

The grandfather-of-four says he has no intention of giving up yet and still manages between 40 and 50 games a season.

Football in the blood

He said: “I still love the game. Football will always be with me, it is in my blood.

“I’ve had a fantastic career – I could be refereeing Liverpool on a Saturday and then the following day a local youth match.

“I keep going though. I can’t run as fast as I used to hence I’m not on the league, but I still have my eyesight so I can make a decision if needed.

“My wife Jill is my biggest supporter – she comes to all my games.”

Brian’s first league outing was in 1970 – just seven years after taking up the whistle – and he went on to officiate thousands of games including a north London derby.

Arsenal manager Arsene Wenger has described his 3,000 game record as a “landmark total” while Sir Alex Ferguson said it was a “remarkable achievement”.

Despite sending off more than 1,000 players he has no regrets from his time, even though a contentious FA Cup defeat of Manchester United by Bournemouth resulted in his headlights being smashed.

But the former toolmaker didn’t make that or a death threat put him off and continued to take on league games until he was 52 – taking the annual league fitness test alongside refs 20 years his junior.

Now he referees in his local leagues, but fondly remembers his time in charge of players including Paul Gascoigne and a young David Beckham.

Brian, from Stonehouse, Glos., added “I used to play myself but then one day I went to head the ball and the centre half did too and smashed my cheekbone in.

“Then the game I got back it happened again to the other jaw.

“I decided enough was enough from that and someone approached me and asked if I wanted to referee.

“I didn’t think I would at first, but I took my badges as the snow fell at the start of 1963 and took charge of my first game in February.

“I was asked to start doing Football League games in 1970 so that was a pretty rapid rise.”

Brian counts the enigmatic Gascoigne as the most gifted player he refereed and remembers Brian Clough fondly.

He added: “Gazza was a super player.

“I never had a problem with Brian and he would often come into my dressing room for a chat after the game.

“I have taken charges of some big games and major upsets. I refereed Bournemouth against Man United when Bournemouth won 2-0.

“But someone obviously didn’t like the result and as I was heading towards Salisbury I realised my headlights had been smashed.

“I had a run of three upsets in a row, the Manchester match, then Brighton beating Liverpool and then Plymouth putting Derby out.

“The Liverpool game was a special one. It was the first Sunday live televised Cup fourth round clash between Brighton and Liverpool in 1984.

“The side had the likes of Kenny Dalglish, Graeme Souness and Alan Hansen.

“Brighton pulled off a shock 2-0 win and after the game the Liverpool manager Joe Fagan came to see me and said the result had nothing to do with me.

Brian has been in charge at Wembley three times – one FA Trophy, once for the Football League members final and for England v Scotland schoolboys.