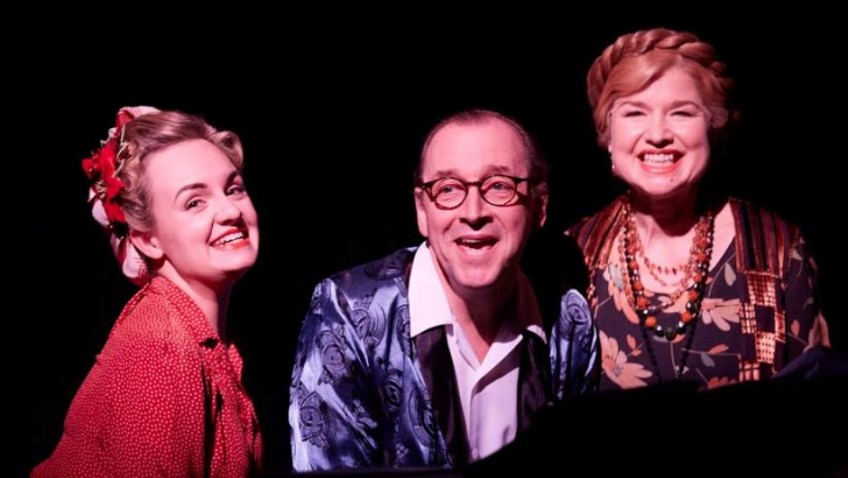 The conceit is that Noël Coward is in his London flat in 1940 during the Blitz trying to write Blithe Spirit and Madame Arcati, the medium in the play, who would later be memorably created by Margaret Rutherford, turns up and raises spirits in both senses of the word

Revues tend, inevitably, to be hit and miss and this revue, with more misses than hits, is no exception. The really big and fatal mistake is the totally unnecessary introduction of Madame Arcati. She is not needed and miscast anyway.

The war is quite sufficient a context for Coward’s songs, which include “Don’t Put Your Daughter on the Stage” and “London Pride” and his autobiographical poem, “The Boy Actor”.

Two of his less familiar war songs are “Would You Please Oblige Us with a Bren Gun” and the satirical “Don’t Let’s Be Beastly to the Germans.” The latter caused a furore in 1943 when many people missed the point completely and thought Coward was actually being serious. Irony is always a risky business.

There are bits and pieces from Ben Jonson, John Evelyn, Thomas Hardy, Walter de la Mare and even from Scrooge.

Dylan Thomas’s “A Child’s Christmas in Wales” is charming. The most moving item is a soldier’s description of the Christmas truce in World War 1.

Eleanor Fargeon’s song, “In the Week When Christmas Comes,” in which three partygoers get more and more inebriated, gets the loudest laughs and the loudest applause.

The show is performed by Stefan Bednarczyk, Issy van Randwyck and Charlotte Wakefield in front of a huge blow-up of the iconic photograph taken by Herbert Mason of the Daily Mail of London during the Blitz and showing St Paul’s Cathedral surrounded by the smoke of raging fires in the surrounding streets and not destroyed.