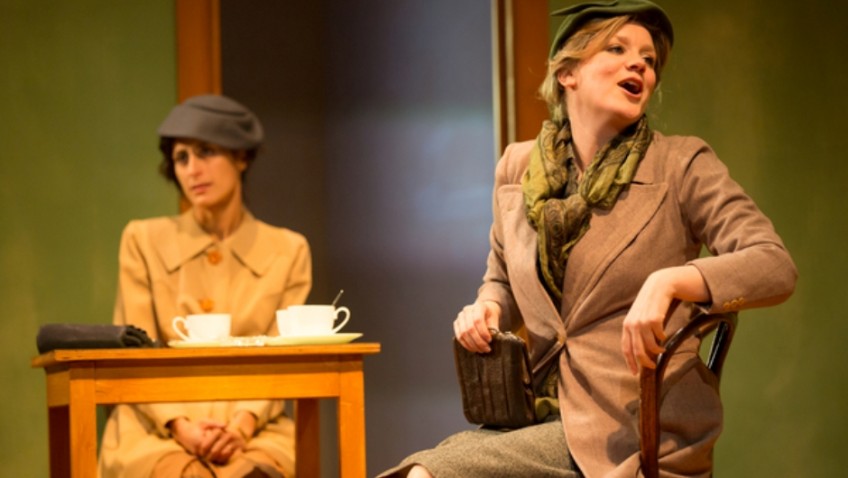 Noel Coward wrote his cycle of nine one-act plays, as acting, singing, and dancing vehicles for Gertrude Lawrence and himself.  There were spread over three nights in three triple bills.

Blanche McIntyre’s production for English Touring Theatre is the first time, since their premieres in 1936, that all nine plays have been performed together. So the revival is something special. McIntyre has made the wise decision to turn a vehicle for two famous and very popular stars into an ensemble piece and the leading roles are shared out between nine actors.

There are three separate triple bills, which can be seen on three separate days. I saw all nine on one day. The following five are the ones I enjoyed most

Fumed Oak, a working-class comedy, set in Clapham, is one of Coward’s best plays. A henpecked husband (Peter Singh) tells his nagging wife (Olivia Poulet), his whining daughter and his horrible mother-in-law, exactly what he thinks of them and having delivered his diatribe, walks out on them for good. The diatribe is splendid and Singh is spot on.

Many of Coward’s one act plays were made into films; but none were as successful as Still Life, which you will know as Brief Encounter, one of the most loved British films ever, directed by David Lean in 1946 and starring, unforgettably, Celia Johnson and Trevor Howard.  A doctor and a housewife, two very ordinary people, both married with children, meet by accident at a railway station refreshment room and fall in love.

Their basic decency and feelings of guilt lead them to hurt nobody but themselves. Their final scene is masterly in its poignacy.  The film has so often been parodied. But there is no parody in the performances of Shereen Martin and Gyuri Sarossy who find their own understated way of playing it which is very effective

Red Peppers back in 1936 must have been a hoot with the famous and immensely talented and sophisticated Noel Coward and Gertrude Lawrence pretending to be dead common music hall artistes, squabbling in their dressing room and performing two very tacky routines, one as sailors, the other as toffs with top hats, tails and canes. Daniel Crossley and Amy Cudden succeed where others have failed because they and their tacky routines look like the real thing.

I saw a truly dreadful and unfunny production of Hands Across the Sea a few years back at Chichester. I must say it was a great relief to see it performed properly and getting lots of laughs. The comedy comes from the confusion caused by the unexpected arrival of two colonials, husband (Orlando Wells, very funny) and wife (Olivia Poulet) at a London home. The hostess (Kirsty Besterman) mistakes them for somebody else. Besterman, babbling away on the phone, is exactly what is wanted .

Tonight at 8.30, a treat for Coward devotees, is touring Oxford Playhouse, The Lowry, Cambridge Arts Theatre, Theatre Royal Brighton and Hall for Cornwall.