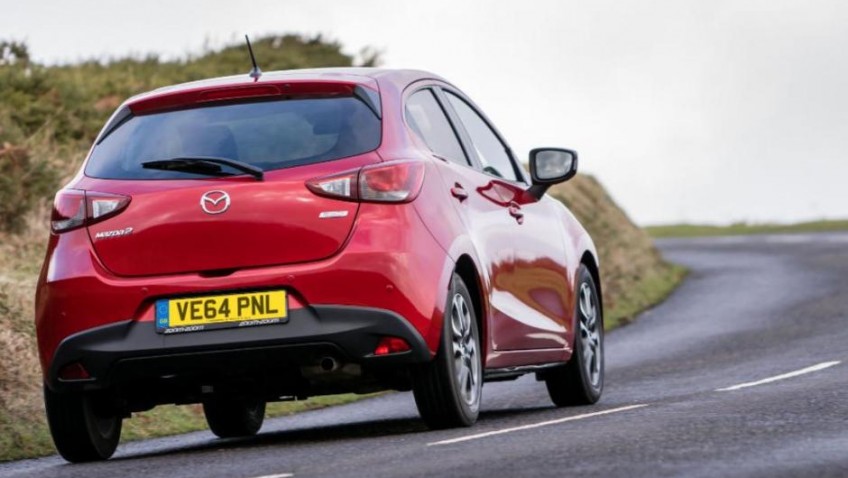 Regular readers might remember that a few months ago I’d entitled a piece ‘Old and New’; words that referred to the engines of two cars, one powered by the old fossil fuel, the other by new ‘clean’ electricity. The ‘new’ and ‘old’ of this current piece refer to another two cars, their build date separated by about 35 years, so the cars themselves are the new and old of the title, and demonstrate just how much motor car design has moved on in those three decades.

The Mazda 2 is the company’s smallest model, and this latest version comes as Mazda are celebrating a strong lift in their fortunes. Sales last year were 21% up on those of 2013, and as ever these days it’s the small cars that are showing the biggest increases. Mazda are renowned for the practicality of their cars, and the ‘2’ continues the tradition, with no 3-door version to entice the go-faster youngsters. This is a 5-door car, which means easy entry and exit wherever you sit, and vastly easier installation of children and grandchildren. Engine choice initially looks small, as it’s a 1.5-litre job whether you opt for petrol or diesel. However, the petrol engine comes in three states of tune, with power levels from 75 to 115PS, while the diesel pushes out 105. In today’s world those aren’t the most impressive figures, for quite a few manufacturers now offer engines with more than 100PS per litre, but Mazda have taken the simpler route, avoiding the complexities – and some would no doubt say potential unreliability – of high powered small engines.

The body and wheelbase are larger than before, so you’d expect there to be a comfortable amount of leg room and luggage space. Compared to the previous model, boot space has increased by 30 litres to 280 litres, which is just under ten cubic feet; maximum volume is 950 litres with the 60:40 split rear seats folded down. The regular shape of the boot means it can now swallow a large 72cm suitcase or standard-sized baby buggy with rear seats in place or a pair of golf bags with the seats folded. The tailgate opening is now 52mm wider at its base than before, and Mazda tells us that “the ease with which the tailgate can be opened or closed has been optimised.” Well it certainly seemed easy to me.

If you like numbers, you’ll be interested to know that the combination of longer 80mm wheelbase, orthopaedically designed new seats with thinner backs and headrests, a compact instrument binnacle and slimmer centre console has resulted in 12mm of additional front shoulder room, 20mm of additional space between the driver and front passenger, and 19mm of additional knee clearance for rear passengers.

What all that means, when combined with seats that provide good lateral support, is that passengers and driver should feel comfortable however hard the car is being driven. Suspension is ideally positioned between the hardness required for good roadholding and the softness that might appeal to passengers wanting a cosseted ride. Noise levels are another plus, for engines are refined even at high speed; the most noticeable noise emanates from the tyres, but it’s not too intrusive.

Cabin of the previous Mazda2 was somewhat dark and uninteresting, and that’s an element that seen some progress. It’s not a spectacular piece of design, but the addition of bright silvered plastics has given the interior a lift, and in practical terms there are loads of spaces in which to put the odds and ends of motoring life.

Like the Mazda6 and Mazda3 before it, the all-new Mazda2 is optionally available in Soul Red Metallic, which uses a unique paint process designed to deliver glossy depth and nuanced shading. In addition to this, the car is available in two new colours – Dynamic Blue Mica and Smoky Rose Mica. These shades are complemented by four further colours – Arctic White, Black Mica, Snowflake White Pearlescent and Aluminium Silver Metallic. Most of these are of course extra cost options.

Anti-lock Brakes (ABS), backed up by six airbags, Electronic Brakeforce Distribution (EBD), Electronic Brake Assist (EBA), Dynamic Stability Control (DSC), Traction Control System (TCS), Hill Hold Assist (HHA) and Tyre Pressure Monitoring System (TPMS), are all fitted as standard. Some readers may be uncertain as to what exactly Hill Hold Assist is. Essentially the system holds the car on the brakes for a couple of seconds when it’s stationary and facing uphill, so setting off requires no skill with the handbrake. About thirty years ago I owned a Mk1 Vauxhall Cavalier, as I’m sure quite a few readers will have done; they were very popular wheels at the time. It’s a long time since I sold the car, so when Vauxhall suggested I should come along and drive some of their historic machinery, including not one but three Cavaliers of various ages, I was keen to take a trip to Luton and visit memory lane.

The main memory I treasure of my Cavalier was its ability to drown out and refuse to go any further if one so much as looked at a puddle of water. I and various other folk tried to cure it of this inconvenience by changing plugs, distributor, ignition leads and so on. All to no avail. The very smart Mk1 Cavalier that Vauxhall provided at their headquarters was obviously not going to do that, and I was keen to see what other differences it would reveal compared to my old car.

In the event what I actually discovered was just how much we take modern cars for granted. The Cavalier I drove that day motored serenely, with very little noise from the engine, but the uncertainty of the handling was a constant factor. One just had to tailor cornering speed to the limited abilities of the chassis. Even the most basic of today’s hatchbacks goes around bends as though on rails. The Cavalier felt more like it was on a water bed. Once one has adjusted to that there’s no problem, but journeys certainly take longer.

What would I’m sure appeal to many readers is the softness of the ride quality. Over the years tyres have gone to a ‘lower profile’, which means there’s less give in them, and hence a firmer ride. They may handle better, but most users would happily swap that quality for a softer ride. It’s worth thinking about when you buy your next car. Take a look at the tyres and you’ll find the sizing written on the side; for example 235/45 R18. The 45 is the profile, which means the tyre’s height is 45% of the width, and the lower that figure is the harder the ride is likely to be, all else such as suspension being equal of course. A profile of 55 will have plenty of ‘give’ in the tyre, whereas 35 is likely to be hard; sporting models go right down to 30. This particular Cavalier’s interior was colourful – a reddish orange velour that’s about a million miles from the universal black of today. It won’t appeal to everyone, but it’s a lesson in just how severely modern cars shun colour; the velour is also very good at keeping you planted in your seat.

The 1.9-litre engine of our car felt relaxed, as well it might, and performance was more than adequate. Interestingly, the engine’s response is faster than today’s average, and in many cases that’s the result of turbocharging, which can cause some delay, though over the years this quality has improved greatly. There is of course no turbocharger under the Cavalier’s bonnet, and the comparatively large engine offers plenty of power from low revs.

Roads around Luton are not tailor-made for car testing, but they were varied enough to tell that the brakes were certainly up to the job, though required considerably more effort than a modern system. As for visibility, the old cars had very few constraints put upon their designers compared to modern machinery. Steel uprights between the windows – called ‘A’, ‘B’ and ‘C’ pillars – are these days expected to play a vital role in protecting the occupants. Take a close look at the old Cavalier, and probably the first thing that will strike you is the narrowness of the pillars. Visibility is therefore superb all round, though in an accident you’d choose to be in today’s car every time.

It’s easy to see why people enthuse about old cars, for such is the pace of change in vehicle design and legislation that old cars will always be wildly different to the modern ones, and that’s what makes it all so interesting. Having said which, for the vast majority of motorists it’s reliability that comes top of their wish list, and my experience tells me that to get a maximum of that you’ll be better off thinking modern. And yes, I say that despite the fact that there will be more than a few readers who know someone with a Mk1 Cavalier that has never once in its life drowned out.