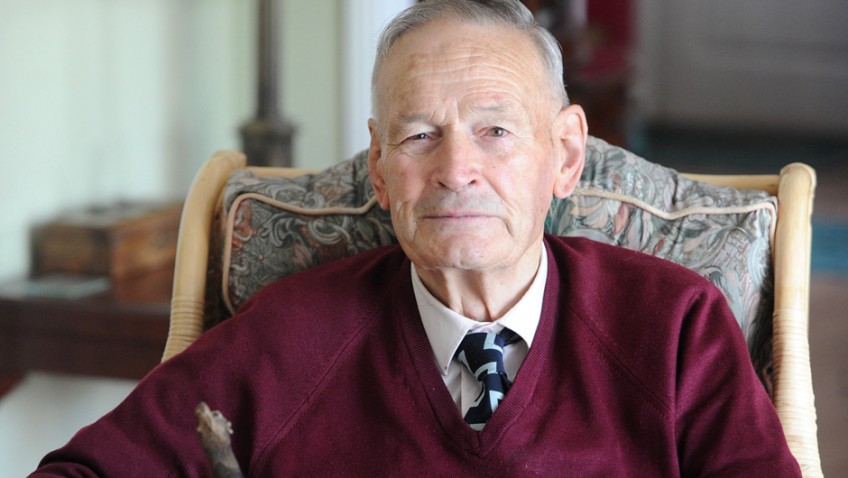 A nearly-blind pensioner is carrying out one man litter crusade to clean up the streets of his home city – at the age of 90.

Community-minded Mike Gibson has become so sick of louts dropping their rubbish on the street that he decided to do something about it.

Almost every day, he goes on patrol with his trusted litter picker and carrier bags out and fills it up with a range of discarded bottles, cans, wrappers and cigarette butts.

Mike says he doesn’t blame the council, but hit out at those responsible for having “no pride” in the surroundings. 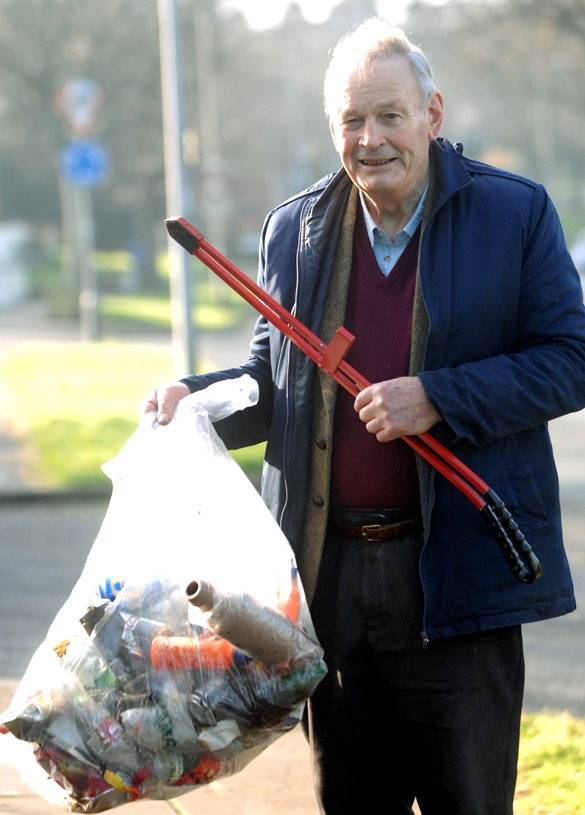 He first started his solitary clean-up four years ago at the age of 86 – but says the problem is currently worse than ever.

And the retired Navy Lieutenant said that despite almost losing his eyesight and reaching the age of 90 he was not stopping any time soon.

Mike, of Plymouth, Devon, said: “There is a hell of a lot of litter scattered around the place at the moment.

“The real problem is not the rubbish, it’s the people that chuck it.

“I go from my house to the shopping centre most days and sometimes to the doctors surgery picking up litter.

“It’s not the council’s fault, they do a great deal towards sorting it out. We need something that would instill a bit of pride in people.

“I still think we have a problem, I’m not trying to lumber someone with the job but people ought to be caned for not picking up their litter.”

He added: “It’s like an assault course some days. I have great sympathy for the council – their waste collection people come up and do the job, then they leave and people throw litter around again. It’s an impossible situation.”

He is also a trustee of his local park and still get involved in Navy affairs.

His selfless actions have seen him win a Pride of Plymouth Good Neighbour award for his commitment to the his local community.

And he said his services are needed more now than ever before – with mess sprawled on the streets on a daily basis.

He added: “We used to be able to relate it to a hot day and people being out drinking for example, but now rubbish is being dumped regardless.

“I’m not sure who it is, but I suspect it’s pedestrians rather than drivers.

“My worry with it is the glass bottles. One day a child is going to injure themselves. It’s not a great advertisement for Plymouth.

“A bottle flew over the hedge into my garden the other day and the drinking glass.”

Before his retirement Mike served as a Royal Navy fleet air arm engineer and worked on board HMS Ocean as the Lead Mechanic.

Although his litter campaign may seem an almost impossible task, Mike said his Navy training drives him forward.

He said: “I was in the Navy and every morning you’d be ordered to tidy the place.

“My first, what I call ‘honest’ job with the Navy was aboard HMS Ocean and our commander and captain both believed in looking after things.

“One just gets into the habit, particularly where litter is involved.”

By Tom Bevan and Rachael Dodd