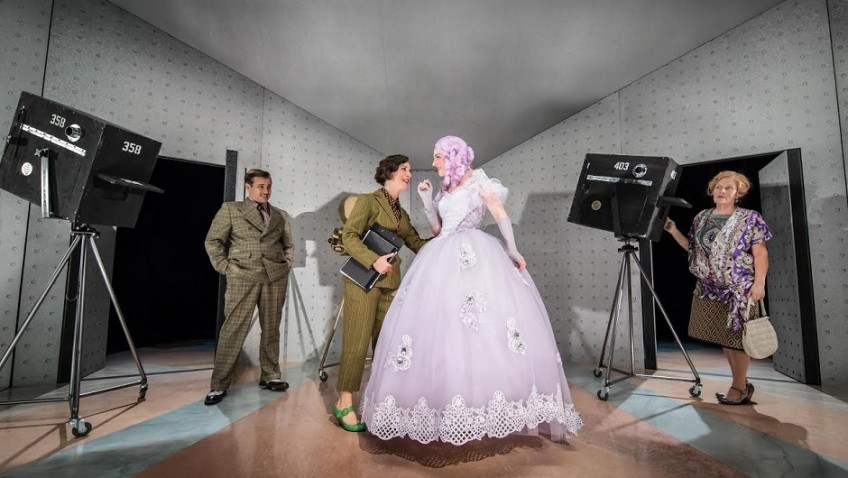 Robert Tanitch reviews Once In A Lifetime at Young Vic, London SE1

One of the best theatre biographies ever written is Moss Hart’s Act One, which describes the traumas leading up to the first night of Once In A Lifetime which Hart wrote with George S Kaufman and which premiered in New York in 1930 when it ran for 406 performances.

The number of people arriving in Hollywood in 1930 on the off-chance of breaking into the movies was so great that The Hollywood Chamber of Commerce found it necessary to take out a full-page advertisement telling the public not to even try, warning them that out of the 100,000, who had started at the bottom of the screen ladder of fame, only five had reached the top.

Hart and Kaufman’s satire follows the fortunes of three small time vaudeville artists, who decide, with the arrival of the Talkies, to break into movies by opening an elocution school for film stars

Harry Enfield plays the Hollywood mogul as a ditherer. Amanda Lawrence has her moments as his receptionist who cannot remember anybody’s name from one minute to the next.

Daniel Abelson, cast as a disillusioned scriptwriter, has the most heartfelt speech when he rages against Hollywood’s wastage of money and talent. Film buffs will not be slow to identify him with Scott Fitzgerald.

John Marquez’s performance as a dumbo is the high spot. One of the funniest moments is when he repeats the tirade word for word, gesture for gesture, to his boss’s face

Instead of getting the sack he is promoted to head of production and makes a terrible movie, which, of course, is a huge box office success and whose manifest faults are interpreted by the critics as the work of a genius.

The Young Vic cannot afford the large cast this classic comedy requires and Richard Jones’s production, which takes a very long time to get going, lacks the American zip the farce needs.