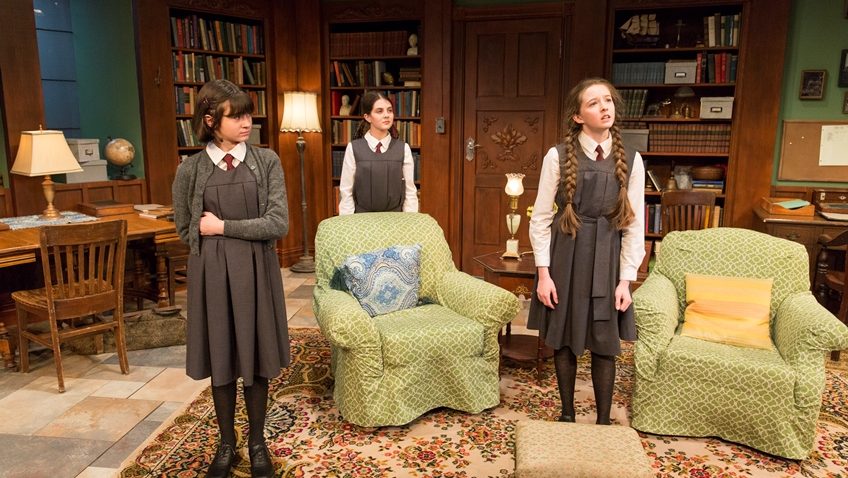 Mint Theatre is a theatre in New York, which specialises in reviving forgotten plays from the past. Their archive is extremely impressive and includes such well-known playwrights as Galsworthy, Barrie, D H Lawrence, Schnitzler, to name but a few, and a host of names not even the most regular theatregoers will recognise.

Mint Theatre has put up three of their productions on line for free. I saw two of them, an Irish play and an English play, and enjoyed them both very much.

Hazel Ellis’s Women Without Men, which premiered at the Gate Theatre in 1938 and was much admired in its day, was rediscovered by Mint Theatre in 2016 and directed by Jenn Thomas.

The all-female cast of 11 actors is excellent.

The play is set in the teachers’ common room in an expensive girl’s boarding school in Ireland in the 1930s. The teachers are a miserable lot, spiteful, selfish, petty and constantly bickering and taking a perverse pleasure in being unpleasant to each other.

Into this unfriendly closet world comes a young teacher (Emily Walton), her first job, bringing high noble ideals and a kind heart. It is not long before she realises that teaching is a horrible beastly life and she chucks it.

The staff, in a rut and knowing their lives are going nowhere, resent her popularity with the girls. She is falsely accused of destroying a script, a lifetime’s work of another teacher (Kellie Overbey).

Women Without Men boded well for Hazel Ellis’s future as a playwright but a year after her success, she, aged 30, gave up writing and acting, to get married and have children.

Incidentally, the 50-seat Finborough Theatre in London, which has had an ongoing informal sharing partnership with the 99-seat Mint Theatre, was going to stage Hazel Ellis’s play this last April when the coronavirus lockdown put a stop to that.

Hopefully, the Finborough will stage Women Without Men when theatres are allowed to open again. It well deserves revival. It’s the best girls boarding school play since Lillian Hellman’s The Children’s Hour and a good showcase for an all-female cast.

Henry Chapin (1886 –1915), born in Brooklyn, New York, and technically American, was an English actor who wrote plays which critics thought were as good as the comedies of St John Hankin.

Great things were expected of him. Sadly, aged 29, he was killed in action in World War 1.

The New Morality, written and set in 1911, but not acted until after his death in 1921, is set on board a houseboat on The Thames.

An Edwardian New Woman (Brenda Meaney) fed up with her husbands platonic relationship with another man’s wife, says some very rude things to her in a public place and so loudly that it is overheard by many people.

She refuses to apolgise and the woman’s husband (Ned Noyes) threatens to take her to court for libel. It is hopeless to appeal to her. She is beyond reasoning and prepared to go to prison.

The comedy, a sophisticated and fascetious trifle, which tends to repeat itself, is not as witty as Hankin; but it is very stylishly acted and very entertaining to watch.

Brenda Meaney’s elegant high comedy performance is perfectly in period and has real class. Michael Frederick is so right for her foolish husband who becomes a laughing stock.

Ned Noyes is very funny as the husband who is scared stiff of his wife. He has a very long and very drunk oration at the dinner table when he talks about men failing to live up to a moral code and sounds as if he is in a play by Bernard Shaw.

As for the insulted woman – nice touch this – she doesn’t appear. She remains off-stage