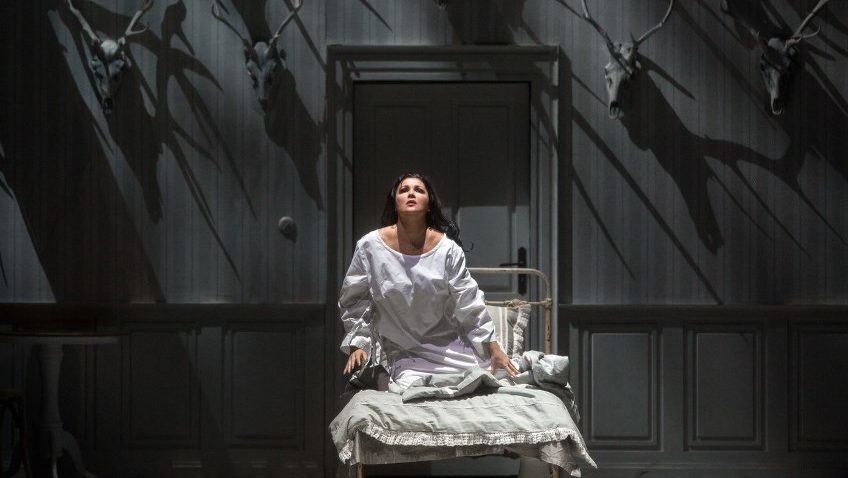 Tchaikovsky’s Iolanta and Bartok’s Bluebeard’s Castle, directed by Mariusz Trelinski and conducted by Valery Gergiev, were performed as a double-bill at The Metropolitan, New York in 2015. Totally different in concept, they share the same theme of darkness and light.

The premiere in 1892 did not have the critical success Eugene Onegin and The Queen of Spades had had. Tchaikovsky never wrote another opera.

Iolanta is a fairy tale set in the 13th century. Trelinski has updated it to modern times and set it in a small bedroom isolated in the middle of a vast forest.

In what looks like a hospital bed is Princess Iolanta (Anna Netrebko) and she is attended by servants who look like nurses. She has never seen the light of day. She was born blind. The king, her father, doesn’t want her to know she is blind. A doctor tells him that she can be cured; but only if she knows she is blind and wants to be cured.

When she was a child, the king had promised her in marriage to Robert, Duke of Burgundy; but Robert (Alexsey Markov), now grown-up, is now in love with another woman whom he sings about in the most voluptuous terms.

His best friend, Vaudemont (Piotr Seczala), dreams of a woman who is chaste and angelic and, on seeing her for the first time, is immediately smitten by Iolanta. The two men’s arias give the opera a big lift.

There is drama, too, when Iolanta learns she is blind and Vaudemont makes her want to see. Netrebko and Seczala have a great duet, the opera’s high spot, when they sing of light and creation. The performance ends in a blaze of light.

The premiere in Budapest in 1918 was not much liked during Bartok’s lifetime, the critics finding it too dark, too surreal, too perverted and too gruesome.

Today it is recognised as one of the 20th century’s great operas and (unlike Tchaikovsky’s Iolanta) is regularly performed worldwide.

The story of Bluebeard, as we know it today, was first set down by the great French fairy tale writer, Charles Perrault in 1697 and he, no doubt, must have taken his inspiration from the notorious serial killer of children, Giles de Rais (1405 -1440).

Bartok’s opera is a psychological thriller. Trelinski has updated it to modern times and, with the use of video projections, gives it a large, dark and creepy theatricality. The castle, cold, dark and dank, plays a key role.

Bluebeard and Judith are discovered in the middle of the forest at dead of night. Nadja Michael in her ballgown and Mikhail Petrenko in his tuxedo make a glamorous couple and give terrific performances.

The score is sexually charged. The opera is a battle of wills between two lonely people desperate for love.

Judith has given up her family and her fiancé to be with Bluebeard. She has heard rumours about him but she is not afraid. “I am here because I love you,” she says. She wants to lighten things up. She wants to open the locked doors of the castle. He wants to keep the doors shut.

Behind the doors are Bluebeard’s life and soul. The first door reveals a torture chamber, the second an armoury, the third a treasure hold, the fourth a garden, the fifth his kingdom, the sixth a lake of tears.

The final door opens to reveal – not, as you might expect – the corpses of the wives Bluebeard has murdered but three (and may be more) live incarcerated women. In Trelinski’s production one of the wives is in a grave and Bluebeard indulges in a bit of necrophilia. The performance ends in total darkness.

NB operagoers. The Metropolitan New York is streaming a different opera for free every night.