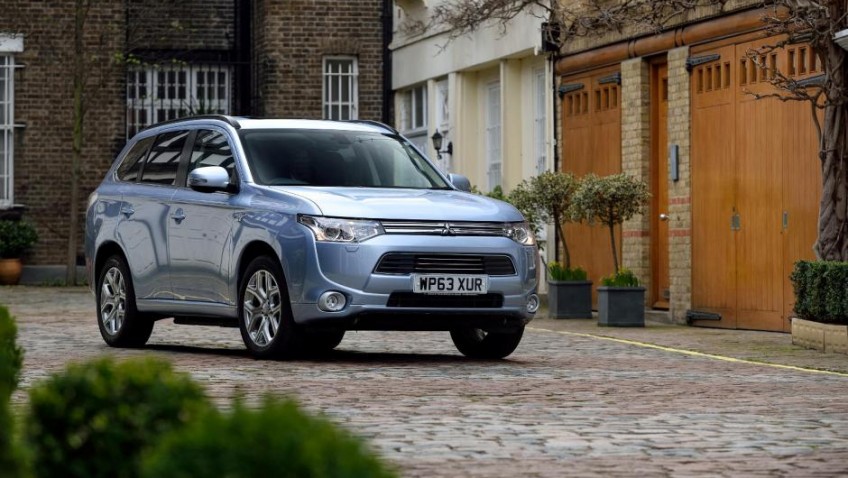 Mitsubishi’s new motor put a large smile on my face

You might think that electric cars are a recent phenomenon, but in fact they’ve been around longer than the fossil-fuelled variety.

Then as now it was the lack of range that put off many people; a problem that was solved with the advent of internal combustion power, after which electric cars to a large extent disappeared from our roads.

Now of course it’s the worries about pollution and the declining oil reserves that have given electric cars a new lease of life.

Having said which, it’s important to look at how the electricity which charges your car’s batteries is produced; in the UK that’s largely a matter of fossil fuels, so in the overall sense battery driven cars are none too green.

They can however shift the pollution from a densely populated area to a less sensitive one.

I like electric cars – always have and I think always will. I’m quite content with an electric-only machine, but I do realise many folk have issues with the lack of range, and fear running out of power before they’ve reached home. So hybrids are by far the most popular version.

However, there’s a major problem with most of them, which is that even when electric mode is selected, the system will only cope with a mile or two before it switches on the petrol or diesel motor.

One is left wondering what the point is, and real-world fuel consumption tests do indicate that in this respect hybrids are not all they’re cracked up to be.

The launch of Mitsubishi’s new motor therefore put a large smile on my face, for here is a car that will do 30 miles or so under electric power (even at motorway speeds), which is considerably more than the average car journey, and only then will it switch to the petrol engine. It works, and in my test on busy roads around and within the city of Bath, it works really well.

The Outlander has been around quite a while, and its practicalities – easy entry/exit, high driving position, large boot – make it an ideal choice for those who are thinking of taking the electric route, which in itself is a practical and potentially cost-saving choice.

For drivers whose daily commute is under 32 miles, the Outlander PHEV (Plug-in Hybrid Electric Vehicle) will allow the whole journey there and back to be under electric power alone. If it’s 32 miles one way, then a recharge at your place of work will of course allow the return journey to be similarly powered.

And a full recharge at home, on night-time tariffs, will likely cost little more than £1. There are also a growing number of ‘fast-charging stations’ which will give an 80% charge in just 30 minutes.

Such is the government’s apparent desire to see greater take-up of battery powered cars that these fast-charge stations in many cases offer that charge for free. You can get full details of this on a very useful site: www.chargemap.com .

It’s no sports car, but the 0-62 time of 11 seconds isn’t slow, and the instant max torque from the electric motors gives an impressive boost from stationary. On the move there’s virtually zero engine sound, so at speeds under 22mph the car emits a noise to warn pedestrians of your approach. Battery weight does have some effect on the Outlander’s performance and ride, but stored where they are – flat below the rear seat – the centre of gravity is lower than with other models, so handling feels solid and secure.

Inside the car, you don’t hear that (well I didn’t) or the electric motors, but you therefore will be aware of the noticeable tyre noise.

The electric system is necessarily a complex piece of design, but you can see what the computer is up to on the well designed info screen. As usual, when lifting off the throttle or braking, the motors reverse their thinking and charge the battery, so you use less braking and can feel the deceleration caused by that charging; you can adjust the fierceness of it yourself.

If you do floor the throttle for a rapid overtaking manoeuvre, then the 2-litre petrol engine will cut in imperceptibly and you’ll have electric and internal combustion motors working to speed your progress.

This ‘Parallel Hybrid’ mode sets the Outlander apart from cars such as the Vauxhall Ampera and Chevrolet Volt which merely use their small 1.4 petrol engine to charge the batteries; this system is known as ‘Series Hybrid’. With the Outlander’s two electric motors driving the front and rear wheels, and the petrol engine also giving its effort to the front, the PHEV is a genuine 4WD SUV that will prove perfectly capable off road.

The emissions figure is 44g/km, which means that freedom from road tax and congestion charge are assured for quite a few years to come.

The official fuel consumption is a dramatic 148mpg, and if you’re not using the petrol engine you will of course get up to an infinitely large mpg figure, but on long journeys when the petrol engine does most of the work, consumption will come down nearer the average for vehicles of this size.

Most hybrids cost considerably more than their fossil-powered cousins, but here again the new Outlander scores well. A recent announcement by the Office for Low Emission Vehicles has confirmed that the government will set aside £200m for the continuation of the Plug-in Car Grant, securing their contribution of up to £5,000 towards the cost of qualifying ultra-low emission vehicles.

They also announced £32m to be used for electric vehicle infrastructure (including a rapid charging network). What all that means is that buyers of the PHEV are given £5K towards the cost of it, which makes it the same price as the diesel auto version; it’s also, incidentally, cheaper than the ‘series hybrids’ referred to above.

This new electric contender is not a perfect solution to our transport needs, but it does move the game on by a significant margin. For those whose motoring is composed of predominantly short journeys, it offers incredibly cheap miles.

Drivers who frequently rack up distance on the motorway network will see less benefit, but their shorter journeys will still give an opportunity for frugal motoring, and either way it’s all done in a very practical vehicle that I found interesting and easy to drive.

Full details of the Outlander PHEV are available on the manufacturer’s website: www.mitsubishi-cars.co.uk