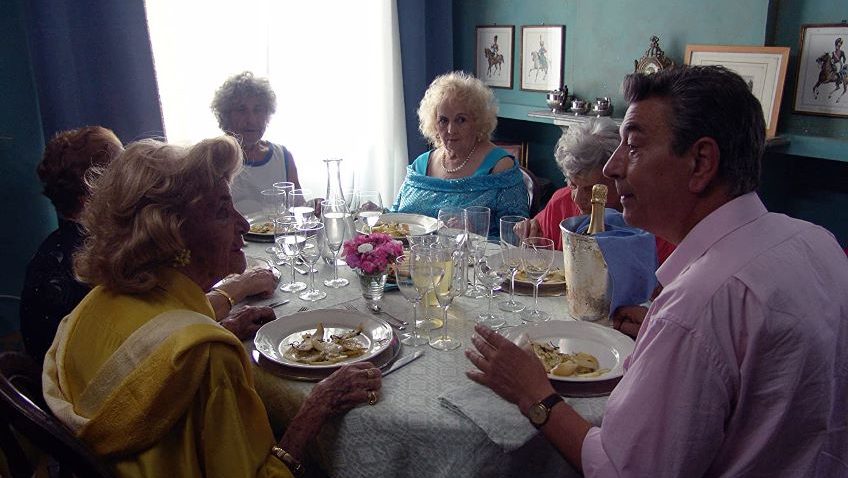 During Italy’s sacrosanct August bank holiday getaway, you can put your dog in a kennel, but what do you do with your dependent, elderly mother? In Mid-August Lunch, a charming, semi-autobiographical film by director/writer and lead actor Gianni Di Gregorio, the solution is to find that rare person who isn’t going away and either call in a favour or pay them enough to make it worth their while.

That rare person is Gianni (Di Gregorio), a heavy-drinking bachelor and full-time carer for a strong-willed mother (Valeria De Franciscis) with aristocratic airs. He reads to her from Alexander Dumas and patiently answers her questions until she falls asleep.

The upcoming bank holiday will be just another day for Gianni, but for the condominium manager of his building to whom Gianni owes service charges; and for a doctor who makes frequent, indulgent house calls, it is a weekend to dump their own elderly mothers on someone else.

With a flat full of independent-minded octogenarians, medication to administer, dietary restrictions to cater for and a snobbish mother who will not mingle with the unwanted guests, Gianni keeps his sanity by reminding himself it is just for the weekend. He is a good cook and passes much of the time in the kitchen, where he is free to indulge in a glass or three. But eventually the women begin to enjoy themselves so much they do not want it to end…

Unlike most films about elderly people, Di Gregorio eschews sentimentality and stereotypes, and gives each woman a distinctive personality, a sense of humour and dignity. Di Gregorio, who has a bit of the looks and charm of an Yves Montand, is delightful as the unambitious, dutiful son who begins to relish the appreciative audience for his gourmet cooking as much as the unexpected income.

The joy of this slight, but beautifully constructed film, is watching the four unwanted relatives – all played by women who had never acted before – come alive in their new-found freedom and in the company of new friends of their age. If the doctor and condo manager feel like prisoners of their elderly mothers, the women have similar feelings.

The doctor’s mother raids the fridge at night gobbling up Gianni’s macaroni that she is prohibited from eating, while the manager’s mother gets drunk in the warm summer evening and tries to seduce Gianni. The women try on clothes and reminisce about lost love and life with people who are genuinely interested in what they have to say. “We live on memories” one of the four women observes. “Without memories what would we do?” For a short while, too, thanks to the once dreaded mid-August holiday, they can live in the present and create new memories.