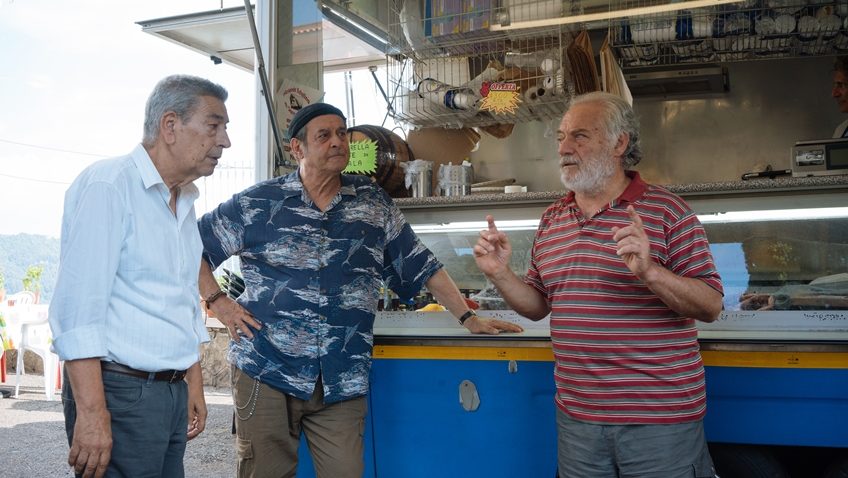 Citizens of the World (available now on Curzon Home Cinema)

Perhaps because actor and script writer Gianni Di Gregorio directed his first film, Mid-August Lunch, aged 59, he is that rare director who celebrates older characters rather than patronising, pitying, or discounting them. Instead of looking back with nostalgia, the third age is a time of discovery where humour and a shot of grappa will get you by, and where sets-backs come with silver linings.

The title is ironic, for the two old friends, the Professor (Di Gregorio) and Giorgetto (Giogio Colangeli), a retired fruit stall labourer, seem to be citizens of Rome alone and are surprisingly unworldly for inhabitants of this cosmopolitan city. But things change when, over a beer at the Café Calisto, where they each have a tab, they discuss the future.

In Citizens of the World the director plays a character familiar from his two previous comedies: Mid-August Lunch (2008), about a caring man who lives with his feisty, elderly mother; and The Salt of Life (2011) about a sexually awakened sexagenarian house-husband who realises he is invisible to women. But here Di Gregorio, with his discreet, yet easy-going manner and signature bags under his sparkling eyes, is “the Professor” (grade school Latin and Greek), retired and single, but still hoping for a date with an attractive woman (Galatea Ranzi) he spots in the café. On this fateful day, the professor and Giorgetto begin seriously discussing an issue common to many older viewers. With their old friends and contacts fast disappearing and no ties to bind them, is it not time to seek out the good life abroad? But where could they go to stretch their state pensions with a little left over to see the world?

On a false tip that he knows the ropes, they team up with Attilio (the late Ennio Fantastichini), who initially disappoints when he practically brags about having no pension. He is free and independent: a citizen of the world. And he has already sowed his wild oats, travelling to Afghanistan on his 1975 Triumph Bonneville, the very antique that is parked outside the villa he calls home – built by his father and brother. He shares the villa with his beloved dog, and his delightful, caring hairdresser daughter lives close by. Attilio also has a cushion: he works for himself, restoring antiques and selling junk in his flea-market stall.

If Attilio does not fit it, the three men take an instant liking to one another, and Attilio decides to go along with them, even liquidating his business to add cash to their retirement pot. Moreover, Attilio knows just the man to help them with their decisions.

They visit Attilio’s customer, the Professor (Roberto Herlitzka, hilarious) an elderly, wealthy dandy in a white linen suit with a penchant for sneaking a drink when his nurse and wife are away. Methodical to a fault, with the three men seated before him like mature students, he rates various countries by a set of criteria, starting with the exchange rate, and including natural disasters and stability, tax and healthcare conventions, crime rates, language and customs and, of course, climate. Eventually recommending the Azores, the Professor despatches them with a list of preparatory measures, including a lesson in Portuguese that ends abruptly when the hapless teacher’s mother serves a sumptuous dinner.

There is a thread that runs throughout the film in the character of Abu (Salih Saadin Khalid), a young, apparently orphaned illegal immigrant whose goal is to emigrate to Canada. When we first meet him, he is taking full advantage of Giorgetto’s offer to let him take a shower in his tiny flat. Although we do not know how they met, we notice that Giorgetto, accused by his brother of being lazy, and borrowing money from the Professor to pay his bar tab, buys Abu lunch when he spots the three friends at a café. While one knows where Abu lives, before long Attilio has given the amiable Abu a job helping him dispose of accumulated antiques.

Somehow, director Di Gregorio (and his co-writer, Marco Pettenello) turn the friends’ episodic meanderings into the most charming 90 minutes of the year. As the friends prepare for their departure in scenes at the post office, the pension service, and the doctor Di Gregorio is not so much poking fun at Italy’s bureaucratic institutions as he is on the Professor and Giorgetto’s hesitant pursuits.

As they walk around the atmospheric, sun-drenched, streets of their Trastevere neighbourhood reading the morning paper over an espresso or travel to the outskirts of Roma, via the Colosseum and the seashore, eating pizza and drinking wine, the audience is invited to wonder why these men would ever want to leave. Fortunately, a series of setbacks, including an old dog, Abu and a date with a lady engender that compensatory silver lining.

You can read our review of Mid-August Lunch by clicking here.

You can read our review of The Salt of Life by clicking here.