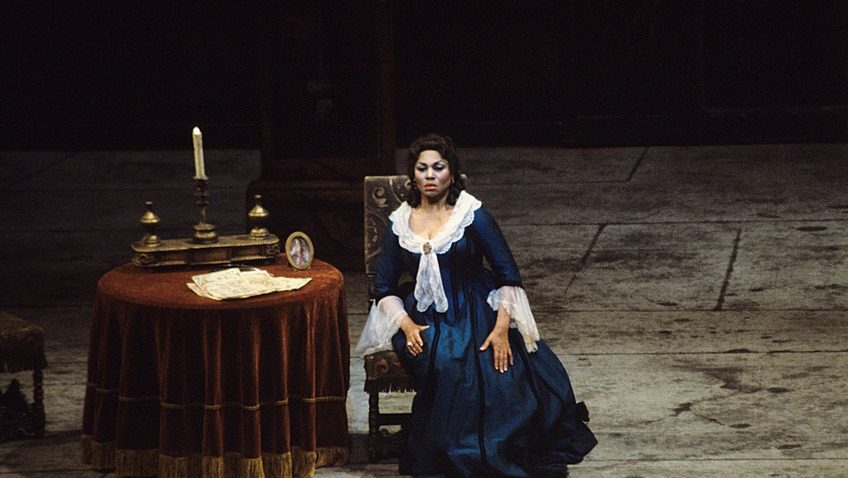 The Force of Destiny has a string of glorious arias and was a huge success when it premiered in St Petersburg in 1862.

One reason it is not staged that often is that the libretto rambles. Too much is going on. The three leading characters are liable get lost in this vast, convoluted and complex Napoleonic epic. Two scenes with the gypsy could go and so could the feeble dancing which adds nothing.

This performance, directed by John Dexter and conducted by James Levine was staged at The Metropolitan in New York in 1984 and starred Leontyne Price, Giuseppe Giacomini, Leo Nucci, and Bonaldo Giaiotti.

Of all the productions of The Force of Destiny I have seen this one is far and away the best and the one I have enjoyed most.

The motif of a malevolent destiny immediately grabs the attention. The overture, taken at a fast pace, gets the opera off to an energetic start. (James Levine’s own energy is very visible on camera).

Leonora (Leontyne Price) is about to elope with Alvaro (Giuseppe Giacomini) when her father enters and is accidentally killed. Carlo (Leo Nucci), her brother, determines to kill them both, family honour and all that.

There is a great scene when Alvaro and Carlo, neither aware of the other’s identity, meet on a battlefield and Carlo saves Alvaro’s life. They swear eternal friendship. But when Carlo is wounded and thought to be dying, Alvaro finds out who he really is and wants to kill him. He spends the rest of the opera challenging him to duels.

Five years later Carlo has become a monk and Alvaro still has no pity, no forgivenesss in his DNA. Their tenor and baritone duets are high spots. So, too, are their arias, Giacomini singing of revenge and Nucci singing of his love for Leonora.

There are more high spots when Price sings, praying to God for help. The scene with Father Superior (Bonaldo Giaiotti) is outstanding.

Light relief is provided by a gypsy (Isola Jones straight out of Carmen) standing on a cart and advancing with the chorus to the footlights, singing of the glories of war, to the accompaniment of a drum beat. It plays like a comic parody of Eugene Delacroix’s Liberty painting.

NB The Metropolitan New York is streaming a different opera for free every night. To find out what is on click here.