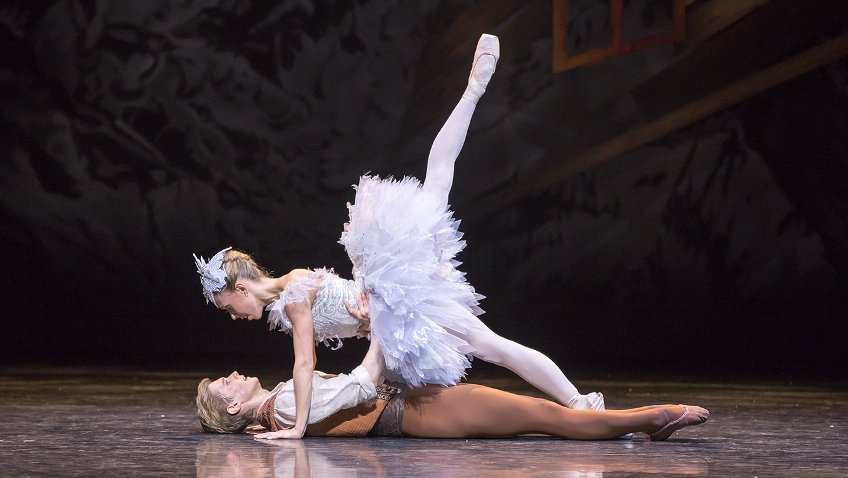 Scottish Ballet resurrected his little performed The Fairy’s Kiss, recreating the 1960 choreography from archival footage. The ballet is an adaptation of Hans Christian Anderson’s The Ice Maiden to music by Igor Stravinsky.

A fairy saves the life of a baby with a kiss when his mother dies in a storm. Twenty years later on the eve of his wedding to a nice peasant girl she returns to interrupt the festivities and carry him off to the Land Beyond Time and Place.

What in heaven’s name is she going to do with him? Put him on ice until he reaches puberty?

The young man is so immature, still a teenager. Scared stiff, he becomes more and more subservient until he is completely submissive and she is on top of him.

With his fiancée, they dance as equals. With the fairy, he does what she says. He is constantly having to bear her on his back and carry her aloft

Constance Devemay is the icy marriage-breaker. Andrew Peasgood is the confused defenceless young peasant. Bethany Kingsley Gardner is the sad jilted fiancée. A ménage à trois would never have worked.

Macmillan’s The Fairy’s Kiss is pleasant enough but it’s easy to see why it has not been revived. The dark metaphysical forces are just not dark nor icy enough.

FIREBIRD, created by Mikhail Fokine and Igor Stravinsky for Ballets Russes, had its premiere in Paris in 1910 and launched the 28-year-old Stravinsky’s career.

Firebird is a magnificent and fantastic spectacle in the wild and exotic Russian fairy tale manner. The lavish pageantry and the vibrant colours amazed audiences and influenced fashions. The costumes were by Bakst.

Prince Ivan captures a magical firebird and she gives him one of her magical feathers in exchange for her freedom. He enters an enchanted garden and falls in love with a princess who has been imprisoned by an evil sorcerer who does not take kindly to him trespassing on his territory and dancing with his handmaidens.

The Firebird returns in the nick of time to save his life and rout the sorcerer and his entourage of monsters and sprites by forcing them to dance to exhaustion.

Stravinsky’s exciting and dramatic score has attracted many choreographers, amongst them George Balanchine, first in 1949 for New York City Ballet and then again for them in 1970 when he updated and redesigned it, joining forces with Jerome Robbins, who choreographed the Infernal Dance

Fokine’s Firebird was one of the first ballets I saw. Margot Fonteyn was the Fairy and there was an enchanting moment in the enchanted garden when twelve maidens were throwing balls in the air.

Balanchine and Robbins’s Firebird feels like a pale carbon copy of the original.