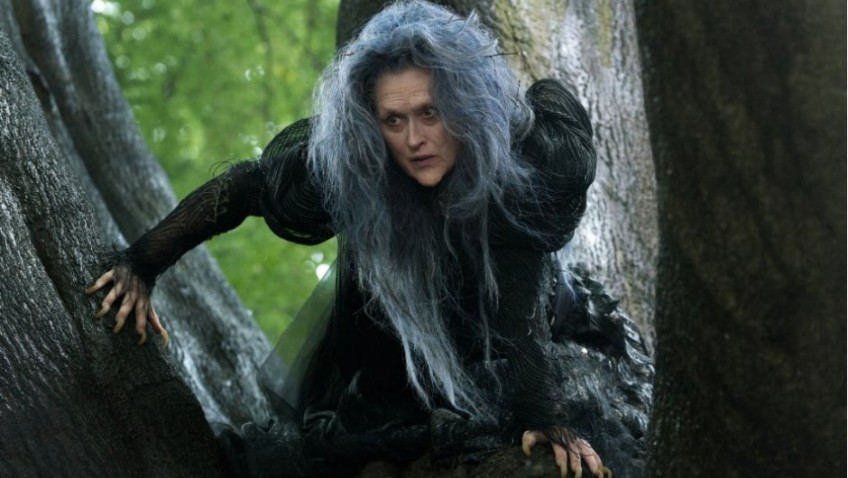 Meryl Streep tops this cast as an ugly hag!

Rob Marshall’s (Chicago, Nine) entertaining adaptation of Stephen Sondheim (music and lyrics) and James Lapine’s (book) stage musical Into the Woods begins and ends (if you stay through the closing credits) with a wish.

Our quests to fulfil our desires and the metaphorical woods unite the characters and plots from four well-known Grimm Fairy Tales, and a few others, too. The musical might begin like a Disney fantasy, but it ends beyond the ‘happily ever after’, asking us to consider the consequences of our words and wishes; our responsibility to our children, and the importance of learning from our mistakes.

‘Careful the things you say/Children will listen….Careful the wish you make/Wishes are children/Careful the path they take/Wishes come true’ sings a chorus that includes the survivors of the darkest Disney movie since Bambi.

Rob Marshall’s film adaptation of the musical Chicago managed to win the Best Picture Academy Award in 2002.  His next musical, Nine, was a flop. But here, minor quibbles aside, he gets it right with a finely balanced British/American A-list cast who really can sing.

Meryl Streep tops the cast as a witch who is so tied up in spells (thanks in part to her mother) that she spends much of the film as an ugly old (of course) hag, dependent on a childless baker (James Corden) and his wife (Emily Blunt) to become young(er) and beautiful again.

At a press conference, Streep told us that she resisted playing a witch for years because of its ageist and sexist connotations, but could not resist this nuanced character or the songs. She pointed out that at 68, she is 40 years older than the first performer to play the role on Broadway: Bernadette Peters. Coincidentally, their names are anagrams, as though Streep’s casting was always meant to be.

In exchange for the Baker couple finding the Witch the ingredients of a magic potion that will transform her back into a beauty, the Witch will grant them a baby.  It is this quest that sends the couple into the woods where they need to beg, borrow or steal the following: Rapunzel’s (Mackenzie Mauzy) golden hair (or something of similar colour); Cinderella’s (Anna Kendrick) golden slipper;  Little Red Riding Hood’s (Lilla Crawford) cape; and Jack’s (Daniel Huttlestone) and his mother’s (Tracey Ullman) milky white cow.

Things get complicated when we learn that the Witch’s secret adopted daughter (stolen from the Baker’s father) is none other than the golden-haired Rapunzel. Though Rapunzel lives in ignorance of her parentage, loving the Witch as a mother, she has recently fallen in love with a hopelessly romantic and otherwise pretty useless prince (Billy Magnussen). The Witch is overly protective of Rapunzel, complaining that she does not listen to her mother.

In the song ‘Children Will Listen’, the advice to parents is to ‘Guide them, but step away’, which the Witch cannot do. When the Witch punishes Rapunzel and her prince for their intimacy, she creates a rift that never heals.  Here, Streep’s talent knows no bounds. Though in character as a wicked Witch, her vulnerability creeps through and is heart-breaking. We see, and hear in Streep’s expressive voice – the pain of her own insecurity and the fear of losing the daughter that was never hers.

Into the Woods gives the fairy tale characters a modern interpretation which contributes toward the light, comic tone of the first half.  Little Red Riding Hood is addicted to junk food and succumbs to some grooming by stranger (a creepy Johnny Depp), in the form of a wolf.  He shows her beautiful things and she forgets her mother’s advice.  This is the woods-turned-internet-chat-room.

Fortunately, in the song, ‘I know things now’, she admits to learning the hard way that ‘a cape and a hood/Will not protect you the way they should.’

Cinderella (Anna Kendrick), who talks to birds, has commitment phobia while her prince charming (Chris Pine) is an impetuous philanderer.  The two vain princes sing a hysterically funny duet, ‘Agony’, in which they strut about on a waterfall tearing their shirts open. In the song they lament that rich, handsome guys like themselves can’t get their girl.  Cinderella’s Prince, too, has to chase his desire, ‘When the one thing you want/is the only thing out of your reach’.  If the Prince is love struck, the baker’s wife is star struck; her head turned by the handsome prince who Cinderella has already come to distrust.  (This abrupt transformation seems to occur off screen).

The wood of the title is a kind of Yellow Brick Road: full of obstacles to overcome, fears to confront and new friends to make.  When Cinderella, (whose spirit mother has been killed by Jack’s giant, begins the hauntingly beautiful song, ‘No one is alone’, she is comforting children who have suffered loss, but also giving advice that she, too, needs to hear.

‘Mother cannot guide you/Now you’re on your own/…Sometimes people leave you/Halfway through the wood/Others may deceive you/You decide what’s good/You decide alone/But no one is alone’. At this point, Little Red Riding Hood begins to wish, but for cakes at the Baker’s.

The moments of comedy and fantasy are nicely balanced with the darker side of the metaphorical wood. In the spine-tingling ending, the camera, suggesting the timely universality of the message, pans rapidly from the little group huddled in the wood, above the trees, to the sky and then beyond the wood to the horizon.

As this happens, we hear the beautifully harmonised words: ‘Careful the tale you tell/That is the spell/ Children will listen,’ and we realise that above all, this is a film about the power of story telling.

Into the Woods might not be everyone’s cup of tea, but the child in us all will be listening.