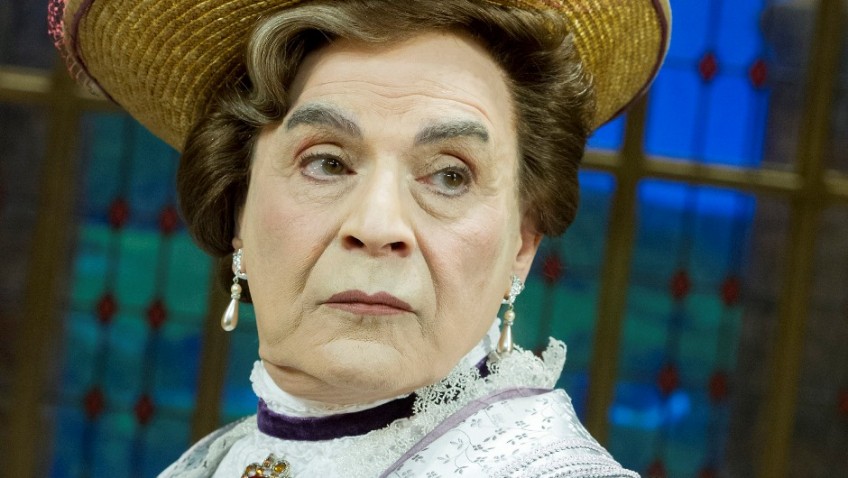 In matters of grave importance (said Oscar Wilde), style not sincerity is the vital thing.

Robert Tanitch reviews The Importance of Being Earnest at Vaudeville Theatre, London WC2

THE IMPORTANCE OF BEING EARNEST, a brilliant mixture of elegant sophistication and preposterous nonsense, is the wittiest comedy in the English language The play is a success,’ said Oscar in an interview just prior to the premiere on 14th February 1895.  “The only question is whether the first night audience will be one.”

Oscar said that audiences were to expect something exquisitely trivial, a delicious bubble of fancy, which had a philosophy and that was that we should treat the trivial things of life very seriously and the serious things of life with sincere and studied triviality.

The surprise casting is David Suchet as Lady Bracknell. And as, you might expect, Suchet is a formidable manly-female gorgon with a deadly eagle stare and quite unnerving when opening a notebook during an interview to find out if John Worthing would be a suitable husband and quickly finding he would not be suitable at all.

There have been many actors who have played Lady Bracknell: Hinge and Bracket in London in a dreadful travesty, Jonathan Hyde in Glasgow, Quentin Crisp in New York, William Hutt in Stratford, Ontario, Bette Bourne on tour (who fooled the audience completely; they having no idea he was a man), Michael Fitzgerald in Bristol in an all-male production, Brian Bedford in New York, Geoffrey Rush in Melbourne, and most recently Gyles Brandreth in Hammersmith. There was talk of Stephen Fry doing it.

Lady Bracknell is a monster without being a myth, implacable in her snobbery and unashamedly mercenary. Every actor, who plays her, acts in the enormous shadow of Edith Evans’s gorgon. The celebrated Evans upward inflection on A HANDBAAAG! is, probably, the most quoted and imitated phrase in British theatre.

Suchet ignores the “handbag” completely and concentrates on “found” and his gut-wrenching horror that Worthing was left in a cloakroom at Victoria Station, the Brighton Line. He gets his biggest laugh on “The line is immaterial!”

Adrian Noble’s enjoyable but over-emphatic production is not afraid to be totally artificial and he encourages the actors to play up to the audience. The cast delivers the epigrams and witticism with exemplary clarity. High spots include Michael Benz and Philip Cumbus having a huge row over muffins and Emily Barber and Imogen Doel having their spat over who is engaged and who is not engaged to John Worthing.

Michelle Dotrice’s Miss Prism, meanwhile, is so head over heels in love with Canon Chasuble that she can scarcely keep her balance.