There are so many reasons to see this cinema franchise

This might not be a high priority movie for the over 50s or for anyone who requires some substance and plausibility to their films, but  The Fast & the Furious 7 is one cinema franchise film that is worth experiencing on several counts.

The first is that the franchise, featuring little known actors, and about nothing more edifying than a gang of street-wise low-lives who race their hotrods across East LA, has made it to the 6th sequel – without being based on a best selling series of novels.

The second is that one of its lead actors, indeed, the lead actor from the original 2001 The Fast and the Furious film, died in a car crash in 2013 before he had completed principal photography of film 7.

The third reason to see the film is that it features three of the most spectacular (and, admittedly, ludicrous) set-piece stunt sequences in any film to date.  Tom Cruise should be seriously worried about how Mission Impossible 5 will compare.

If this is not enough to persuade you to part with your money, the history of the franchise is compelling.  The film, based on a magazine article about New York Street racers, is about an undercover LAPD cop, played by Paul Walker, who infiltrates the local street racing gangs.

It had a running time of 106 minutes and a budget of $38 million, but surprised its producers, and the studio (Universal), when it grossed $207 million.

As mentioned, the second reason to see the film is that the late Paul Walker is brought back to life.  Walker was killed, age 40, a passenger in a car crash, during (but not related to) the filming of The Fast & The Furious 7.

A combination of CGI wizardry, segments from outtakes of previous films, and the use of Paul’s two brothers, combine to give him a substantial role.

The film ends in a contrived, but moving tribute to Paul, which must be the first time a franchise film incorporates a montage of scenes from previous films into its ending.

The third reason to see the film is the stunts and special effects, which caused some laughter at the screening I attended.

A car wrangler named Dennis McCarthy was employed to coordinate the dozens of vehicles consumed in the film, and to build cars from scratch capable of mind-boggling endurance tests.

For no reason other than the staging of the stunts, the plot leads the team to, among other places: Colorado (when an airplane drops five skydiving cars into the sky); Azerbaijan (where the vehicles land and then speed off along vertiginous cliffs to participate in a roadside raid; and, for the best stunt of all, to Abu Dhabi. 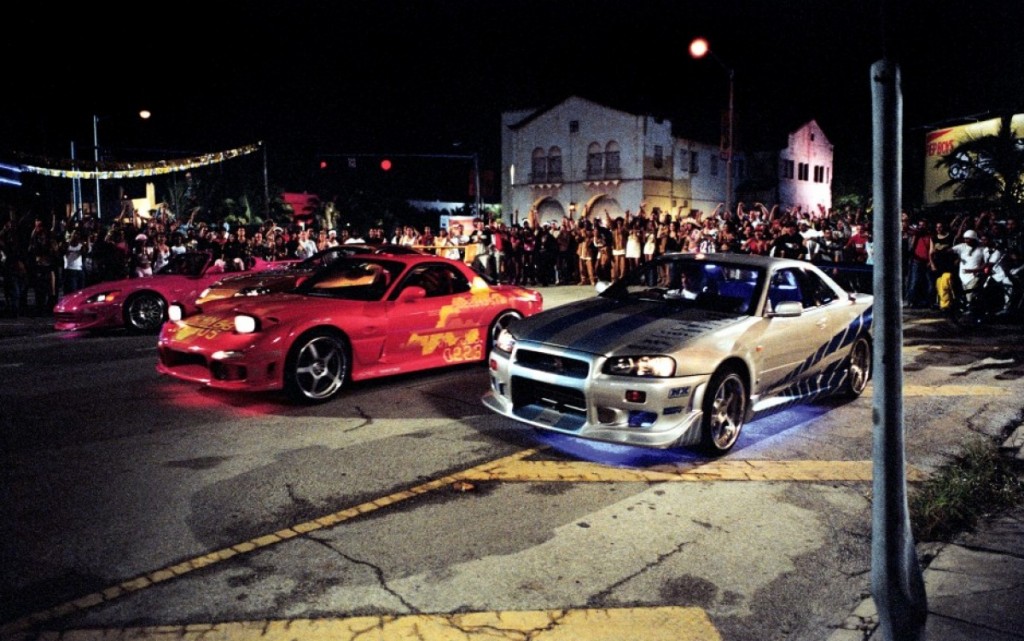 Here, to escape from a Prince’s secured Penthouse, Dom drives the Prince’s rare car out the Penthouse window, crashing into an adjoining tower to ‘land’.  As it turns out that the car has no breaks, its speed propels the car out the second tower window into a third consecutive tower, until the car stops of its own momentum.

The plot, which is not why anyone sees this franchise, introduces three key characters into the story.  British martial arts/action film star Jason Stratham is the villain Deckard Shaw, out to revenge the death of his criminal brother by systematically targeting each of the protagonist-drivers.

Happily, 64-year-old Kurt Russell comes to their aid as Frank Petty, head of a covert Black Ops Team. He lends them support in exchange for their helping him to recover a tracking device called ‘God’s Eye’ and the kidnapped sexy hacker who operates it.  Megan Ramsey ( played by Game of Thrones star Nathalie Emmanuel) is a valuable super hacker who emerges from the sea in a bikini in homage to Halle Berry.

Meanwhile, Letty Ortiz (Michelle Rodriquez) who has been with the franchise from the start, recovers her memory and remembers she married Dom (Vin Diesel).  While everyone is happy that Letty has regained her memory, the audience may be struggling to remember why or how she lost it.

Director Justin Lin has been replaced by 38-year-old Malaysian/Australian Director James Wan. Wan is best known for his modern horror films, Saw (2004), Insidious (2010) and the Conjuring (2013), all of which have sequels.

While the editing of many of the city-based chase sequences and fight scenes is too fast and furious to be comprehensible, the set-pieces are terrific.  A favourite has Brian (Walker) trapped in a bus teetering on the edge of a bottomless cliff moving like a seesaw as Brian scrambles to escape from it.

Meanwhile Dwayne Johnson’s character, Luke Hobbs, spends most of the film in hospital after an assassination attempt by Deckard Shaw. To satisfy fans, Johnson breaks out of the hospital toward the end when the action returns to LA and his friends are in trouble.

Emerging through the shattered glass door of a lorry that has crashed over a bridge and should be scrap metal, Ramsey and Letty, in a car nearby cannot believe her eyes.

Letty smiling at his heroic appearance, asks, ‘have you brought the cavalry?’  Luke, (showing us why Dwayne Johnson is known as The Rock), flexes his unreal muscles and faces her: ‘Woman’, he declares defiantly, ‘I am the cavalry!’

You can see the official trailer for this film here: