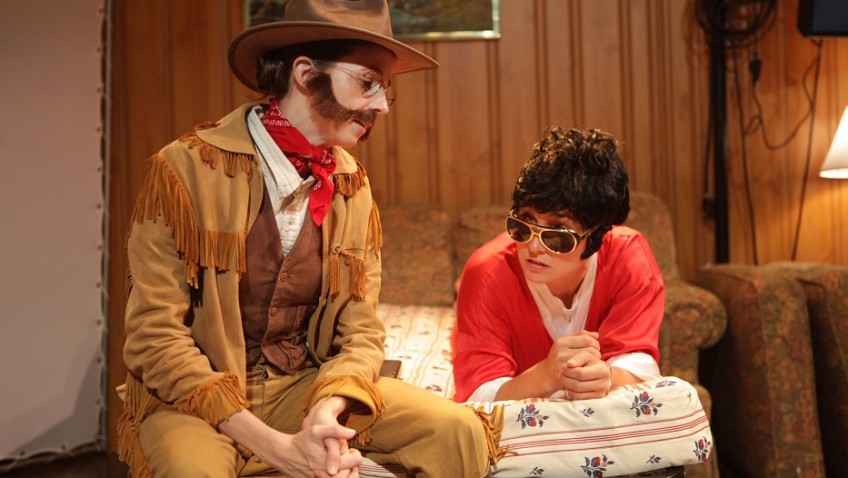 Maleness and femininity: a gender road movie on stage

The play with the difficult-to-pronounce title is presented by The Team, a Brooklyn-based ensemble dedicated to making new work about the experience of living in American today.

The road movie script is collaboratively written by the director, Rachel Chavkin, the two actresses and the associate director, Jake Margolin, with the set designer, the video designer and the sound designer.

Two cross-dressers, an Elvis impersonator (Libby King) and a Roosevelt impersonator (Kristen Sieh), meet up and go for a gender drive. Their relationship goes nowhere.

The Elvis impersonator is a miserable 35-year-old woman, who has been working in a meat processing plant for 15 years. She goes to work and comes home and watches TV and gets stoned. She is not comfortable about being gay.

She goes on a hallucinatory road-trip from Badlands to Grassland accompanied in her imagination by Theodore Roosevelt and Elvis Presley.

Much of the action takes place on film. Of the two actresses, the versatile Kristen Sieh has the most fun. But then she has the comic role of the 27th President of the US (a cowboy with whiskers) and she can be more physically funny and even have a punch-up with bison.

Libby King has to say things like, “Do you wish you had never met me… do you feel sorry for me… do you think I’m capable of being loved?”

You would be better off staying at home and watching Susan Sarandon and Geena Davis in Ridley Scott’s 1991 film, Thelma and Louise.