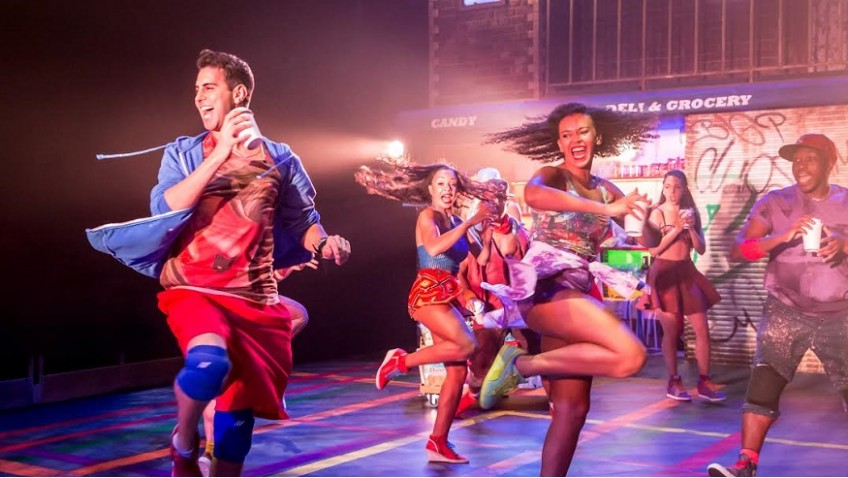 Luke Sheppard’s production, which was a huge success at Southwark Playhouse last year, has found a perfect new home on the traverse stage at this new theatre which is just behind King’s Cross Station, at the junction of Kings Road and Goods Way, a five minute walk from the station.

Lin-Manuel Miranda’s exuberant rap, hip-hop musical, opened off-Broadway in 2007 and went on to win many awards, including best musical.

The book by Quira Alegria Hudes is a sentimental soap opera about the dreams and ambitions of the Hispanic immigrants who live in Washington Heights, a poor Puerto Rican/Dominican neighbourhood in New York.

The main story is about a girl (Lily Frazer) who has dropped out of university because she didn’t have enough money to continue her studies. Will her dad (David Bedella) have to sell the family business so she can return? And how will dad and mum (Josie Benson) react to her wanting to marry a non-Latin boy (Joe Aaron Reid)?

The music is great and the singing is great. Benson has a knock-out solo.

What makes this musical successful is Sheppard’s lively production and the clever and dynamic choreography of Drew McOnie. The sheer complexity of the staging and the unflagging energy of the cast, acting, singing and dancing, constantly amaze.

The traverse staging brings the audience really up-close and increases the enjoyment.

We are going to hear a lot more of Lin-Manuel Miranda. His latest show, Hamilton, has just opened on Broadway to tremendous acclaim.