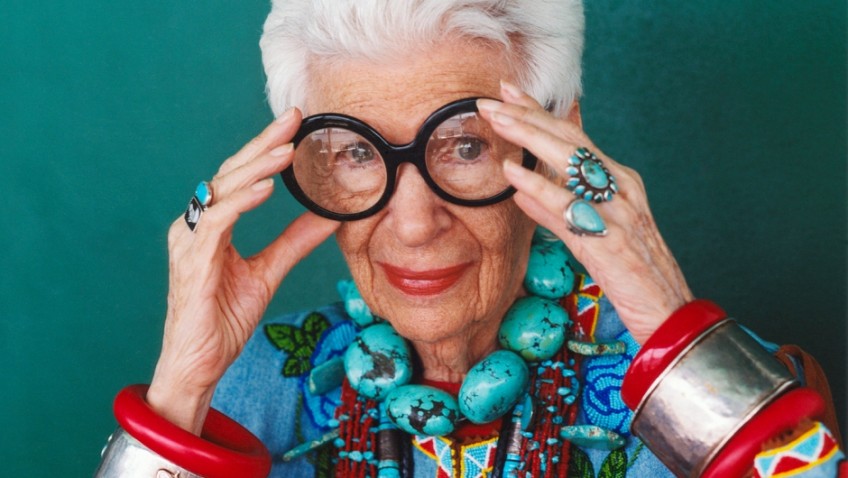 How fitting that for his final film, 87-year-old Albert Maysles (Gimme Shelter, Grey Gardens, co-directed with brother David), who died in Manhattan this past March, celebrates the life of another iconic New York Jew: 93-year-old interior decorator, style guru and fashionista, Iris Apfel.

With her dark, huge, round-rimmed glasses, tuft of white hair, pronounced wrinkles (she does not believe in Botox) and small, delicate frame somehow buttressing layers of costume jewellery, fake fur bags and bright-patterned coats, Iris is, quite literally, a style icon. In addition to sharing a common history, the rapport between Maysles and Apfel results in a charming and intimate portrait. Born in Queens, NY, in 1921, it is easy to see how Iris Barrell was influenced by her two working parents. Her mother Sadye (who, Iris tells us, ‘worshipped at the altar of accessory’), was a lawyer and a fashion boutique owner, while her father was an entrepreneur and importer.

After studying Fine Arts at NY University, Iris apprenticed with an interior designer before starting her own interior design business. Iris is frank about her looks, and says she does not like ‘pretty’. ‘To compensate for not being pretty, you have to become more interesting’, she rationalised. ‘When you get older, you can rely on that.’

In 1948, when Iris married advertising executive Carl Apfel, the couple founded Old World Weavers, a niche company that researched and imported and manufactured fabrics that could no longer be found in the marketplace.

For just under 45 years, they restored the fabrics of major museum collections and White House furnishing under nine presidents. It is not only hand-made fabrics that were becoming increasingly hard to find. Iris laments that ‘all the hand craft trades are going down the tube and soon there will be nobody left.’

Still, Iris does not spend much time looking back and has little to regret, including children. Iris says that she never wanted children as she and Carl loved to travel and it would not be fair to leave the children with a nanny.

It was after the couple sold Old World Weavers that Iris began her second career: style guru, lecturer, teacher, lender and benefactor. In the film we see young women being ‘made over’ and others sitting in lectures listening to Iris’s words of advice.

Despite her passion for fashion, she says that ‘it’s better to be happy than well-dressed.’ Fortunately, there has never been a conflict between the two states for Iris. She became what she calls an ‘octogenarian starlet’ when, in 2005, New York’s Metropolitan Museum staged their first one-woman show of costume jewellery and fashion. The word-of-mouth publicity generated a sizeable attendance and the show travelled. Iris and Carl also travelled. Their business took them to every corner of the globe, and everywhere she went, Iris collected – and not just clothes and accessories. In addition to their large apartment on Park Avenue in Manhattan and their luxury apartment in Palm Beach, Florida, the Apfels have a cavernous storage loft in Long Island City that resembles the prop store for the Metropolitan Opera House.

But at 93, Iris is downsizing. The loft is being emptied systematically and some of the clothing is being given away to the Peabody Essex Museum. A woman asks her how she decides what to give away and Iris admits, ‘it’s hard.’ But when asked if it keeps her up at night, Iris looks surprised at the question. ‘God, no.’ she exclaims. ‘There are more important things when you get to my age’ and cites health issues. ‘People say what energy I have. It’s nothing compared to what I used to have. I get tired.’

The audience might get tired just watching Iris’s busy routine. Never one for shopping from home, browsing through catalogues or internet ordering, at 93 Iris continues shopping in her customary manner: ‘I go out and get it.’