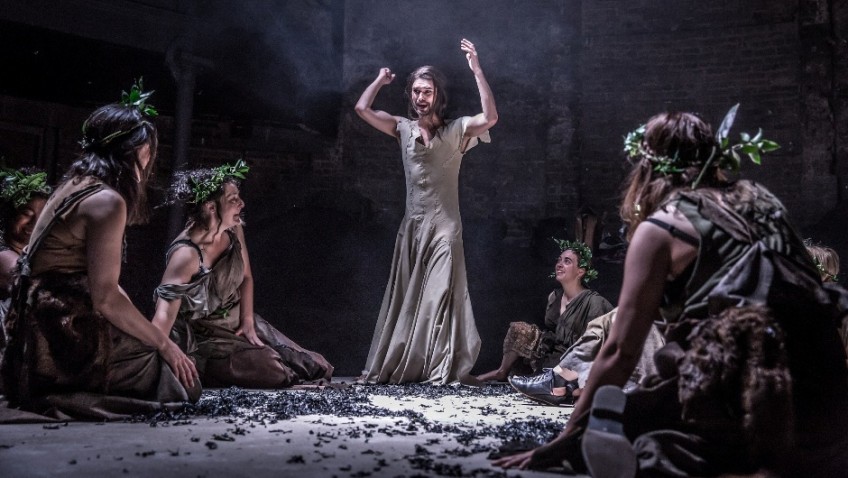 BAKKHAI, the last of the great Greek tragedies, was written by Euripides when he was over 70 and living in voluntary exile in the wilds of Macedonia, far from civilisation.

The play, a psychological drama, a struggle between restraint and excess, was first produced in Athens in 405 BC, a year after his death. It won him a posthumous First Prize at the dramatic Festival of the Great Dionysia.

Of the three great Greek playwrights Euripides is the most modern and accessible. Dionysos, god of theatre, god of wine, god of sex, piqued, arrives on earth in human form to exact a terrible revenge. “I am a god,” he roars, “and I will not be insulted!” He persuades the king to disguise himself as a woman and go to the mountain woods and spy on their frenzied rites.

“What sort of dress do you have in mind?” asks Pentheus whose Puritanism is found to be a cloak for his voyeurism and transvestism.

The delirious women, led by Agave, his mother, tear him to pieces, limb from limb. Agave, fails to recognise him and thinks they have killed a lion.

Bakkhai is one of the great horror stories of all time. (The horrors take place off-stage.) Barbarism triumphs over civilisation. The message is loud and clear: don’t mess with the gods. The tragedy, in a colloquial version by the Canadian poet Anne Carson, is performed, as it would have been in Ancient Greece, by only three male actors (who play multiple roles) and a chorus.

Ben Wishaw’s Dionysos, sinuous and androgynous, is a sly, effeminate, playful puss in an evening ball gown; and with his moustache and his beard and his long flowing hair, which he girlishly fondles, he looks like Jesus one minute and Conchita Wurst the next.

Bertie Carvel’s Pentheus appears first in a business suit and then in drag. He also plays the raving Agave, who bears a strong resemblance to Meryl Streep.

Carvel has appeared in drag before. He played Miss Trunchbull in the musical version of Roald Dahl’s Matilda.

A chorus of multi-racial women look as if they might be refugees or on their way to Glastonbury. Later they put on war paint. You do not always hear the lyrics, but the a cappella created by Orlando Gough and which they sing is one of the most notable features of James Macdonald’s production.