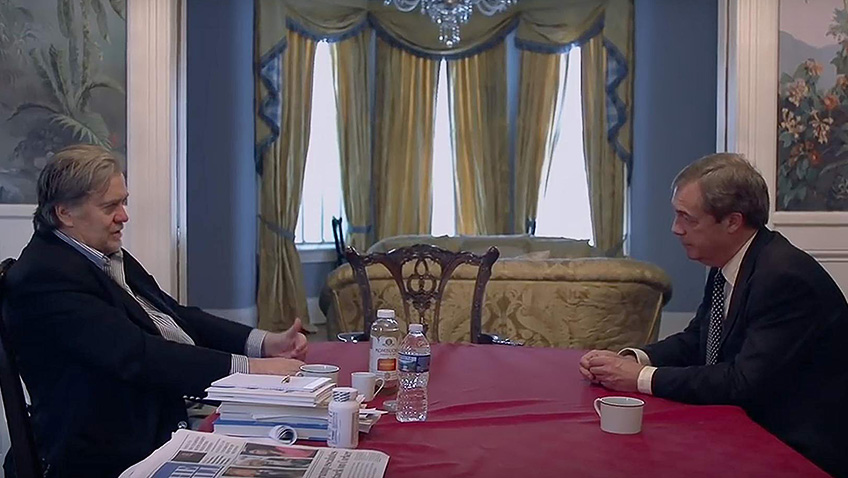 You have to admire Alison Klayman, a well-educated, Jewish, American female filmmaker born in the Cradle of Liberty, Philadelphia. She spent three years in China capturing the internationally celebrated artist Ai Weiwei as he created art and paid the price for it with state-sponsored beatings, vandalism of his studio and detention. In The Brink

Klayman spends a year following around another revolutionary although that is where the similarities end. For her subject is Stephen K. Bannon, the extreme right wing elitist charlatan, the Harvard educated, Goldman Sachs investment banker currently leading an international populist movement to destroy “elitist” governments. This cannot have been easy, but she deserves credit for gaining wide access to Bannon who reveals more than he is aware of.

Bannon clearly loves the limelight and, flush with cash from his years as an investment banker at Goldman Sachs, he became a Hollywood producer. The District of Corruption and Clinton Crash attacked the Clintons, while The Battle for America attacked central government (and the welfare state). The Undefeated was a tribute to Sarah Palin and Bannon might be hoping that that will be a fitting subtitle for Klayman’s film, too.

As Bannon is proud to remind us, his claim to fame was getting Donald Trump elected. That said, his role as the White House’s Chief Strategist was short, even by Trumpian standards. By August 2017, after only seven months, he was ousted, presumably for quotes from Bannon that were to appear in Michael Wolff’s best selling book, Fire and Fury: Inside the Trump White House

When Klayman installs her camera and sound equipment (which she operates) in Bannon’s town house, he is regrouping, while remaining a staunch Trump supporter. He may be 64 but, armed with two mobile phones, he is preparing for the future, forcing himself to drink a disgusting green health concoction that his nephew prepares for him. He might not be shedding the extra shirt that he seems to wear, but his goal is drop 25 pounds. It is a good idea as the grizzled Virginian looks unhealthy and leads an unhealthy lifestyle.

Klayman’s brilliance is her ability to remain a neutral fly-on-the-wall while allowing her camera and recorder, as well as her editing, to express the subtext and point of view. The green drink takes on a symbolic meaning as we witness the gradual disappearance of Bannon’s diet throughout the film. By the time Bannon has burnt his bridges in America and heads for Europe, he hosts one private dinner party and hotel breakfast after another. 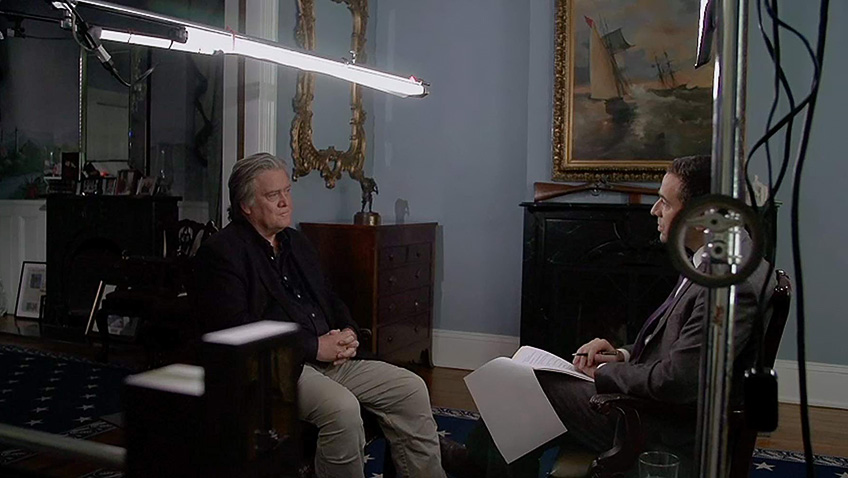 Stephen K. Bannon and Ari Melber in The Brink

But after his high profile sacking from the White House, things are not going well for Team Bannon. Breitbart News is sinking financially and his backers, Robert and Rebekah Mercer, withdraw their support of Bannon. He loses his radio show and is ousted as Chairman.

Bannon’s campaign support for Roy Moore in a special Alabama Senate election (to replace Jeff Sessions) does not go much better. It should have been easy, as Alabama is a Republican State and Moore was endorsed by Trump, despite accusations of sexual misconduct by three credible women. Women and a turnout of African American voters lead to a shocking defeat to Democrat Doug Jones,

Bannon then hits the campaign trail ahead of the mid-term elections. The film incorporates Bannon’s Clinton-and-media-bashing speech at the Citadel Republican Party conference in South Carolina where he reminds the cheering audience of his glory days. ‘When we won at 2:30 in the morning, the next morning, I went in it was like it was the hand of divine providence that won that’ he says, just as a woman stands up to point out, ‘It wasn’t the divine’. As she is dragged from the room to loud booing, the three-time married Bannon entertains the audience with the sexist joke, ‘I thought my lawyers sent the alimony cheque.’ 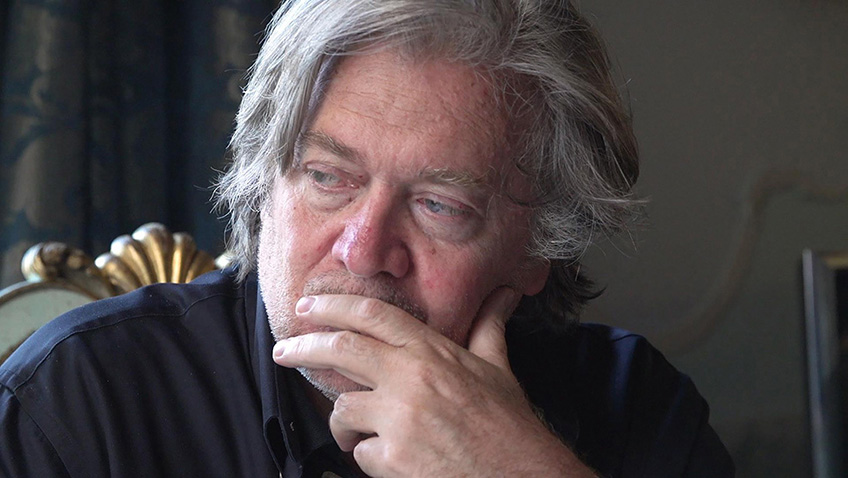 Stephen K. Bannon in The Brink

The Democratic victory in the House at the mid-term elections was the final straw for Bannon. The great strategist misread the situation and it’s therefore time to move on.

Ironically, it is Europe that might save The Defeated. The second half of the film focuses on Bannon’s attempts to unite European (and indeed world) right wing groups and autocrats in a global alliance that he would manage. The platform is anti-immigration, destruction of the EU, destruction of liberal values and a free press and “the building of an old school Christian democracy,” although democracy is now populism. He is going for economic nationalism backed by people like Hungary’s Viktor Orbán and Rodrigo Duterte the Philippines leader who admits to authorising extrajudicial killings.

Bannon is far from stupid. He jokes at the camera that follows him around his five-star hotel room in Italy that, as a populist, he will get into trouble for this. Meanwhile he attends a series of dinners and breakfasts with people like Jérome Rivière, and Filip Dewinter, head of the Vlaams Belang Party of Belgium, and Kent Ekeroth, of the Swedish Democrats and the Northern League’s Matteo Salvani. A frequent guest is the UK’s Nigel Farage, eager to bite the hand that has been feeding him for years and to front Bannon’s global alliance of far right and populist leaders.

It is only when The Guardian’s intrepid, and impressively well-informed journalist Paul Lewis is filmed interviewing Bannon that he is put on the defensive, alleging that certain disreputable dinner party guests were not invited but simply showed up. This insightful film ends with the exiled Chinese property billionaire Miles Kwok proposing to put $100 million in a Rule of Law fund that Bannon will manage.