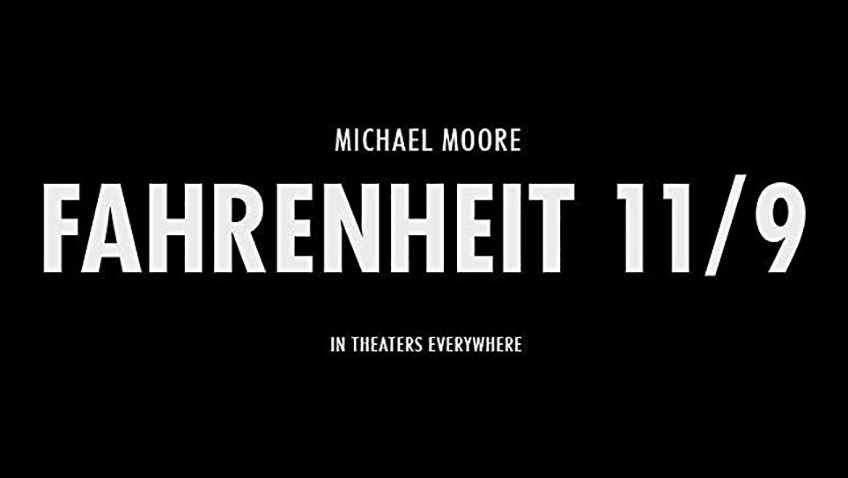 is a vital, well-researched, fascinating and at times, cheeky, polemic about contemporary American politics as only Michael Moore can do them. He is capable of presenting convincing and substantiated, cogent arguments on many issues, but in Fahrenheit 11/9

there might be too many of them, resulting in a frustratingly rushed and unfocused film. But when he is good, he is very good, and overall, Fahrenheit 11/9

is a thought-provoking and surprisingly non-partisan warning to the American people – and democratic countries everywhere.

First the title. In 2004 Moore’s film Fahrenheit 9/11, about the Bush presidency, his war on terror and the media’s coverage of it received the longest standing ovation in the history of the Cannes Film Festival – not to mention the Palme D’Or. The accusations of inaccuracy were swept aside in the liberal euphoria of Bush bashing, although now the tables have turned. At John McCain’s funeral Bush was more eloquently critical about Trump than was Obama. The date, 9/11, following the American manner of putting the month before the day referred, of course, to the attack on NYC’s World Trade Centre.

The title and word Fahrenheit in it, is an homage to Ray Bradbury’s book Fahrenheit 451

– the temperature at which books burn. If you switch around the 9/11 to 11/9, you end up with Trump’s election.

The universality of the message is clear from the start when, over a caption, Philadelphia, November 7, 2016, Moore asks: ‘Was it all just a dream?’ Archival footage of Hilary Clinton supporters celebrating prematurely contrasts with the sombre, defeatist mood in the Trump contingent. Women were elated that the next president would be a woman while Fox news ‘seemed relieved that they would not have to support this man’. Then something strange began to happen. North Carolina, Pennsylvania, Michigan and Florida. At 4:14 AM on 11/9 (our 9/11 2016) the image of the next president was projected onto the Empire State Building. Moore asks, ‘how the f**K did this happen?’

His answer is multi-faceted and is not answered in a straight forward manner, but the gist of it is that the USA’s brand of democracy is not democratic. Starting with the Electoral College that did not reflect the popular vote, and progressing through to the murky party system itself, Moore shows how thousands of (mainly young) new candidates with ideas and brains are being excluded. This long segment demonstrating how candidates are being de-selected or ignored by their own party elite is interesting and relevant, but could have tied in better with the Trump election.

In answering the central question, Russian hacking is right up there on the agenda, but fleetingly, before Moore goes on to the part the media played in promoting Trump. Moore reminds us that Trump complained that he was paid less than Gwen Stafani for appearing on the Apprentice, and suggests that he was always seeking free publicity. When NBC Universal sacked him for his derogatory comments about Mexican immigrants, (cancelling his beauty pageants and his appearances on the Apprentice) he began speaking at public rallies, all the while denying the rumours that he was running for President. Soon NBC news people were putting Trump on the air again – giving him millions worth of free publicity. Trump spent about a third less on publicity for his Presidential campaign than any of his rivals because of all the free publicity created by the ‘will he or will he not run’ stunt, and then by the shock announcement that he was running.

The most solid and in-depth segment of the film is the Flint River water scandal. It began when Richie Synder, the founder of Gateway Computers, was elected Governor of Michigan. According to Moore, Snyder immediately set about getting rid of the mayors of four cities (with significant black populations) and putting in his own cronies. This plan so impressed Trump that he made a visit to Michigan. One of those cities was Flint, Moore’s home town.

The Flint water crisis first started in 2014 when some industrialists decided it would be profitable to build a new pipeline from Lake Huron to Flint. The existing pipeline had to be closed down during this period and the drinking water source for the city of Flint was changed from Lake Huron (and the Detroit River) to the Flint River. The reason? The Flint’s polluted water was much cheaper. Due to insufficient water treatment, lead leached from the water pipes into the drinking water, leaving over 100,000 people with signs of lead poisoning, including hair loss, skin rashes, violent behaviour and a gradual reduction of IQ levels and mental capacity. Various experts talk about the consequences of drinking polluted water.

The most chilling part of this riveting segment comes when Moore points out that the water was corroding the parts used in a General Motors factory in Flint, and GM complained to Snyder. Instead of this being the wake-up call for Snyder to reverse the pipeline decision, he simply ordered water from the relatively pure Lake Huron to go to GM, while the rest of Flint continued to drink the polluted water.

is pure Moore and won’t be high on Donald Trump’s viewing list. The interesting thing is, it is unlikely to warm the heart of Trump’s rival, Hilary Clinton, or appeal to his predecessor President Obama either. When Obama visited Flint, he angered the residents of Flint and many democrats by asking for a glass of water and pretending to drink it, as though mocking the people who were complaining. He left Flint without doing a thing to help the people.

Moore brings in the teachers’ strike in West Virginia as an example of read grass roots democracy, but is not optimistic. Hilary Clinton’s campaign against Bernie Saunders is touched upon citing how he was ignored by the Democratic party despite winning all the popular votes. Moore argues that disillusionment with Obama and with the treatment of Saunders resulted in democrats not voting. This claims Moore, contributed to the election results. Trump took Michigan with 47.50% of the total votes, over Hillary Clinton’s 47.27%.