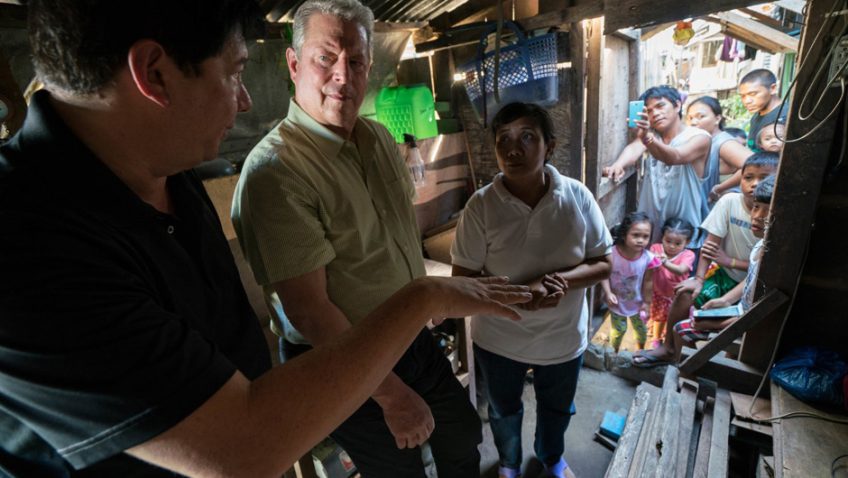 From the euphoric 2016 Paris Agreement to Trump’s election, Al Gore soldiers on

It is possible to disagree with Al Gore, but it’s impossible not to admire the man. While causes célèbres and their celebrity preachers come and go, Gore soldiers on, never losing faith, not even when Donald Trump is elected and vows to undo everything Gore has been working for. This is the situation at the start of Gore’s less impactful, but equally important An Inconvenient Sequel: Truth to Power, the follow-up to his influential 2008 documentary An Inconvenient Truth.

After a segment looking at Antarctica’s melting ice caps and the effect on the death and destruction from the resultant flooding across the world, the movie backtracks to the euphoria of the 2016 Paris Climate Agreement to suggest just what is at stake with Trump’s presidency. Acknowledging the advent of Trump, Gore sighs and points out that there have been a lot of setbacks. ‘Now we have another. There has never been a more important time to speak truth to power.’ And Gore is used to setbacks. His 1988 bid for the Democratic Party nomination was unsuccessful and he pulled out of the 1992 race when his son was involved in a serious accident. In 1999, he lost in a controversial election against George W Bush, winning the popular vote by half a million but losing in the Electoral College by a narrow margin of 5 points after a dodgy vote count in Florida. Gore concedes the election, ‘for the sake of our unity as a people and the strength of our democracy.’

That Gore refers to Trump as ‘another setback’ might seem an understatement, but, as we see, Gore travels the world to speak at Climate Leadership Training Seminars where mainly young faces listen respectfully and nod in agreement. He points out that the documented trend for higher world temperatures has a direct effect on sea levels and flooding. Pollution from fossil fuels goes into the fragile ozone layer. At these seminars, as in the film, Gore is careful to balance the setbacks with the positive so as not to discourage people from continuing the good fight.

Gore delights his audience, for example, with a chart showing Chile’s phenomenal increase in solar energy usage and takes us to Georgetown Texas, to meet its jovial, roly-poly Mayor Dale Ross. Jokes ensue when Ross announces he is a Conservative Republican, but still aims to make Georgetown the first city in Texas, and the largest (pop. 67,120) in the USA, to be 100% renewable by 2030.

The film grows dry in the middle with repetitive shots of Gore on the podium, but unlike the first, more informative, film, in this sequel we get to know Gore a little. We visit the house where he was born (probably not the home he shared with the mother of his children as they are now divorced) with its spectacular views and look at family photos of the handsome, then-lean congressman with his young children. And a photo of his father (who served in the House of Representatives and as a Tennessee Senator) and LBJ – they fell out over the Vietnam War. Nor is environmentalism a retirement pastime for the former Vice President (Gore served as Bill Clinton’s VP from 1993-2001).

Though not mentioned in the documentary, Gore clashed with the H.W. Bush administration over global warming and reputedly chartered two planes to evacuate 270 people from New Orleans after G. W. Bush’s lame reaction to Katrina.

One of the drawbacks of the film is that principal photography began before Trump was elected and the now-threatened Paris Climate Change Agreement was to be the focal point, no doubt supplying the film’s cathartic, triumphant ending. The film was re-edited in light of the shocking election result.

Directors Bonni Cohen and Jon Shenk inject some tension into the film when it looks like India’s Prime Minister Modi will reject the Agreement. Modi argues that his country has the right to catch up with developed nations that have already polluted the world with coal for 150 years. While Gore credits President Obama, VP John Kerry and others with the Conference’s success, it looks like Gore saves the day. He comes up with an innovative plan to give India technological and financial support (he visits the World Bank and the CEO of a Silicon Valley company called Solar City) if it will drop its plans to build four new coal power plants. Gore remains in the background, only using his former position to gain access to world leaders for climate change discussions.

The impact of the Paris Agreement was that, unlike the Kyoto Protocol, with the exception of Syria, understandably preoccupied; and Nicaragua – which held out for even stronger controls – there was universal acceptance of a comprehensive Agreement. And this is why the juxtaposition of an elated Gore cheering the signing of the Agreement and the caption informing us of Trump’s intent to withdraw from the Agreement, is so powerful and so sad.

With the word ‘inconvenient’, however, Gore acknowledges that he is fighting an uphill battle telling the unconverted some bad news that they do not want to hear. But in Paris, the world finally listened and that, we can rest assured, will keep Gore going.