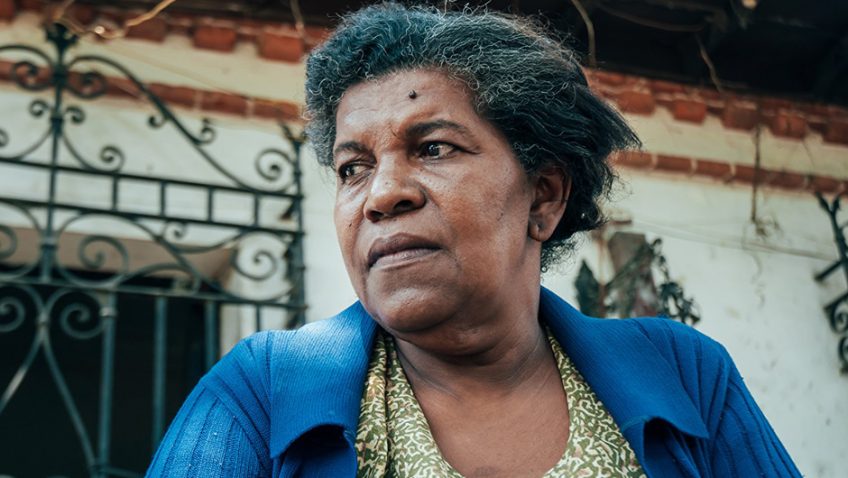 A timely, personalised story about the collapse of Venezuela

Venezuelan films, like news about the country itself, seldom make it to our shores, so the timing of La Soledad, Canadian resident Jorge Thielen Armand’s personalised eulogy for the fate of his country, is propitious. For this story of an impoverished family’s struggle to remain in a derelict Caracas villa and find medicine for a sick grandmother corresponds with today’s news of widespread starvation and medical shortages in President Nicholás Maduro’s Venezuela. Though Armand’s debut feature takes a while to get going, the semi-autobiographical film is always convincing and many of the key characters play themselves. Like Caracas itself, Jorge’s (Jorge Thielen Hedderich) beautiful villa in a Caracas suburb is in a dire state. The weeds from his grandparents’ luxurious gardens where he played as a boy are slowly claiming the spacious family house. The film is bookended with home movies from Jorge’s (whose family is white). It is also the childhood of his younger friend, José (José Dolores López) grandson of the wealthy family’s black cook Rosina (María Agamez Palomino) attentive grandson. Now, Jorge narrates, most of his family has left the country and Senora Irene (Elizabeth Quintanales) has allowed Rosina, now 72 and ailing, to remain in the disused villa as a gesture of good will.

Rosina is also housing her handsome and responsible 27-year-old grandson José, nicknamed El Negro; his principled partner Marley (Marley Alvillares), a cleaning lady; and their adorable pre-school daughter Adrializ (Adrializ López) dreams is of going to the beach. Senora Irene overlooks the presence of José, but tensions are raised when José’s brother, mixed up with a criminal gang, needs a safe house.

Pressure also mounts from the unemployed men around José to engage in kidnapping tourists and other desperate measures to find money. Then the family faces the shortage of high blood pressure medicine for Rosina’s heart condition. The hospitals and pharmacies have nothing left on the shelves but ordinary pain killers and José cannot afford a private clinic. This is not only Jorge’s and José’s experience, but an unambiguous indictment of Chavez’s and Maduro’s grand scheme for a socialist utopia. It is not long before Jorge, who had agreed to help José repair the villa, apologetically announces his family’s plan to demolish La Soledad and try to sell the land. José’s response, ‘you are all the same’, reveals the class and colour divide that runs through the film.

José asks Rosina about ghosts in the villa, and she tells him the story of a previous owner asking the family slaves to bury ‘morocota’ or gold coins in the property. The owners then killed the slaves so their spirits would guard the treasure. Jose gets hold of a metal detector and begins his search… The introduction of this touch of magical realism is a lovely and necessary touch, even if it is not fully realised.

La Soledad is the symbolic name of the villa, as a desperate Marley threatens to take Adrializ to Colombia where she will seek work and Jorge announces he is heading south to work in the mines. When facing the death and desperate violence around him, José goes for a swim in the beautiful sea, we are reminded of the scene in Camus’ allegorical novel The Plague in which the philosophical observer Tarrou and the humanist, atheist Doctor Rieux pause from their uphill struggle against the epidemic to take a swim in the sea.

The acting is so natural it is easy to forget that we are neither watching a documentary, nor, for the most part, professional actors. José Dolores Lopez is particularly good in a role that reminded me of John Boyega’s torn character in the upcoming film Detroit.

The villa, La Soledad, is itself a character in the film, which was made within its crumbling walls of Armand’s own family home and can be seen to represent the state of the once prosperous country itself. It has the same symbolic value as the eponymous building Aquarius in Kleber Mendonça Filho’s recent masterwork about a Brazilian woman’s struggle to remain in her family’s art-deco apartment as greedy developers close in around her. It is interesting that on the eve of La Soledad’s release, the Brazilian ambassador recently spoke out to refute comparisons between the state of Venezuela and that of Brazil.

Armand’s co-writer and co-producer, Rodrigo Michelangeli, is also his talented cinematographer who vividly captures the gritty world of the kidnappers, the empty shop shelves and the romantic villa, that, like all the characters, is facing destruction. Stylistically and visually La Soledad is reminiscent of Thai director Apichatpong Weerasethakul, Cemetery of Splendour with its hypnotic pacing and its images of ghosts and tropical plant life reclaiming a troubled, ailing nation.

La Soledad has a short theatrical release at the ICA, London from 18 August, and is then available on the streaming service MUBI from 1-30 September.