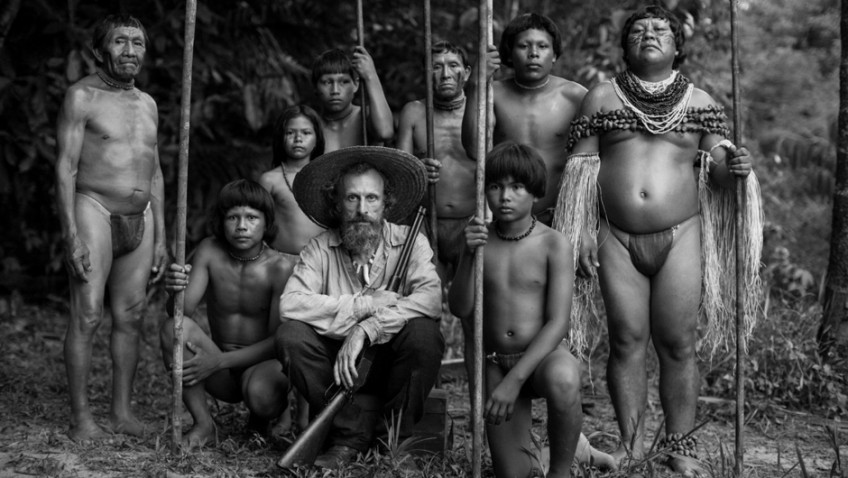 Joyce Glasser reviews The Embrace of the Serpent (June 10, 2016)

In his extraordinary film, The Embrace of the Serpent, director and co-writer Ciro Guerra does more than tell a the powerful story that takes us as far from our daily routine and preoccupations as any film you are likely to see this year.  He suggests that there is another way of viewing our world and living in it, but one that we are too conditioned by our values and lifestyles to access.  The 35-year-old Columbian gives us the kind of immersive, visceral and spiritual cinematic experience that the best directors strive for and the best audiences seek out. Guerra guides us into his riveting story that was inspired by the diaries of two Western explorers, the German scientist Theodor Koch-Grunberg and the American ethnobotanist, Richard Evans Schultes who explored the area in the early 1940s.  While the real Koch-Grunberg died in the jungle in 1924, Theo’s story seems to take place around 1900.

We spend two hours suspended in time in the Amazon jungle, witnessing the destructive vestiges of colonialism while listening to several native dialects and a smattering of Spanish, German and Portuguese.  The cast is as unfamiliar as the environment, most being indigenous native while the professional actors are hardly household names. Shot in stunning black and white with a wide screen format by David Gallego and filmed in Venezuela, Argentina and near the Cerros de Mavecure mountains in southeast Colombia, The Embrace of the Serpent is also a breathtaking visual experience.

The story centres on the relationship between an Amazonian shaman, Karamakate and two European scientists/explorers who cross his path some forty years apart in their search of the rare yakuna flower.  You might be reminded of Chilean auteur Sebastian Silva’s masterpiece, Crystal Fairy, in which a mixed group of young people go in search of a local hallucinogen — the San Pedro cactus – and discover a lot about themselves.   But Crystal Fairy has moments of real humour.  That is the something you will not find in The Embrace of the Serpent.

In the first long, slow take of the film, Karamakate (first time actor Nilbio Torres), naked but for a loin cloth and jewellery, shows off his awesome physique, as he squats like a statue by the river, observing, possibly waiting.  A canoe rows to the show carrying a dying German explorer, Theo (Jan Bijvoet) and his guide and carer Manduca (Yauenku Miguee).

Theo believes that the yakuna can cure him and Karamakate holds the key to the sought after tree.  Wary of the stranger, Karamakate refuses to cooperate.  He claims to be the last surviving member of his tribe precisely because the others trusted the white men and accuses Manduca of betraying his people. But Manduca argues that Theo is a force for good; his diaries will be published and educate the Europeans about the destruction of the rain forest and its people.  When Theo adds that he has seen other people in Karamakate’s tribe and can show him the way, Karamakate softens.   He keeps Theo alive and conscious by injecting some medicinal herbs into his nostrils by way of a dart gun device.

The three men set out to find Karamakate’s  people, but the deal is not unconditional.  The expedition will fail if Theo and Manduca are not ‘in harmony with nature’ and they must not eat meat and fish at this time of year.  The journey is a real Heart of Darkness experience. The three men encounter a native escaping persecution by the white men, and is so maimed, he begs the men to kill him. There is a tense moment with a ‘friendly tribe’ when Theo confronts the resentful chief, accusing someone in the tribe of stealing his compass.  Theo claims he wants it because if the natives become dependent on technology, they will lose the ability to navigate by the stars.  Ironically, Karamakate dismisses Theo’s argument, pointing out to him that the natives live in the real world, too. Far more terrifying is their encounter with missionary zeal gone mad.   The three travellers, starving and thirsty, stop at an orphanage run by a fanatical white priest. He selflessly remains in the jungle to feed and protect the children of the murdered or absent native plantation workers from certain death.   Dressed in white robes, the children are whipped mercilessly for conversing in their ‘pagan’ language and daring to believe in their people’s customs.

Not long into the film you start to lose the sense of time and even space.  As the natives apparently believe that time is not linear, but more like the rotation of concentric universes, this is probably the right way to view the film.  Guerra signals a major switch in time when Theo’s canoe paddling down the river dissolves into Evan’s (American actor Brionne Davis) canoe where he is rowing with the older Karamakate (Antonio Bolivar Salvador).  We then experience their first meeting.

We know that Theo failed to please the gods, but Evans claims he was inspired by Theo’s writing to continue his work.  In fact, the character of Evans is inspired by the influential Harvard professor Richard Evans Schultes, a botanist and pioneer in the study of indigenous people of the Americas.  He specialised in their people’s use of hallucinogenic plants (his book, The Plant of the Gods was published in 1979) and was the first American to ring the alarm about the destruction of the rain forest.

Evans’ journey is equally disorientating.  He is forced to dump even his meagre personal belongings, including his camera and books, stopping only with his record player.  Karamakate tells him, ‘Before he c,an become a warrior a man has to leave everything behind and go into the jungle guided only by his dreams. In that journey he has to discover completely alone, who he really is. Some get lost and never come back.’

Be prepared for some soul searching.