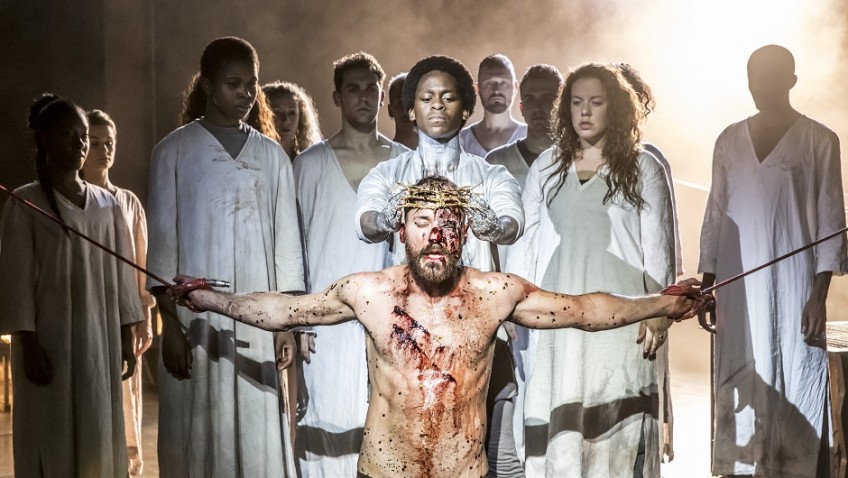 At last, a major revival of Jesus Christ Superstar Andrew Lloyd Webber and Tim Rice’s Jesus Christ Superstar is a rock opera for secular audiences. It began as a concept album and was followed by concert performances.

Andrew Lloyd Webber and Tim Rice, theologically neutral, concentrate on Jesus’ humanity rather than His divinity. The book covers the final days of Jesus’ life as seen from the point of view of Judas Iscariot.

Christian fundamentalists hated the show. Jesus was too human, too hippie; and He had a girl friend. There was no Christian message and no resurrection.

Bill Graham said the performance bordered on blasphemy and sacrilege. The Vatican did not give Jesus Christ Superstar the OK until 1999.

The first act of Timothy Sheader’s production, with its hand-held microphones and microphones on stands, is very much a concert performance and one of the instant high spots is Anoushka Lucas singing “I Don’t Know How to Love Him”.

The songs and the singing give a lot of pleasure but initially there is no drama, no emotional involvement. The lighting in your face is often blinding. Declan Bennett stars as Jesus himself in Jesus Christ Superstar

Tom Scutt’s set is the steel girders of an unfinished building and houses the orchestra. A huge crucifix lies on the floor and is used as a catwalk. The costumes are modern, drab, baggy, Hoodie.

The nearest we get to anything religious is a Last Supper tableau after Leonardo da Vinci.

The second act is more dramatic and emotional. Chorographer Drew McOnie’s raises the temperature considerably. The finale – with Jesus being whipped by a frenzied mob baying for his blood and screaming “Crucify him!” – is staged for maximum horror.

Declan Bennett doesn’t look like any Jesus you may have seen in paintings. He doesn’t stand out from the rest of the cast and he doesn’t have any real impact until Jesus is in Gethsemane and arrested.

Judas is the superstar. Tyrone Huntley’s fanatical, unhappy youth, in love with Jesus, dominates the stage as singer and actor.

Paul Caulfield camps it up as Herod, a drag queen, who invites Jesus to walk across his swimming pool. Caulfield wears a glittering silver cloak which he throws off to reveal an all-but naked body.