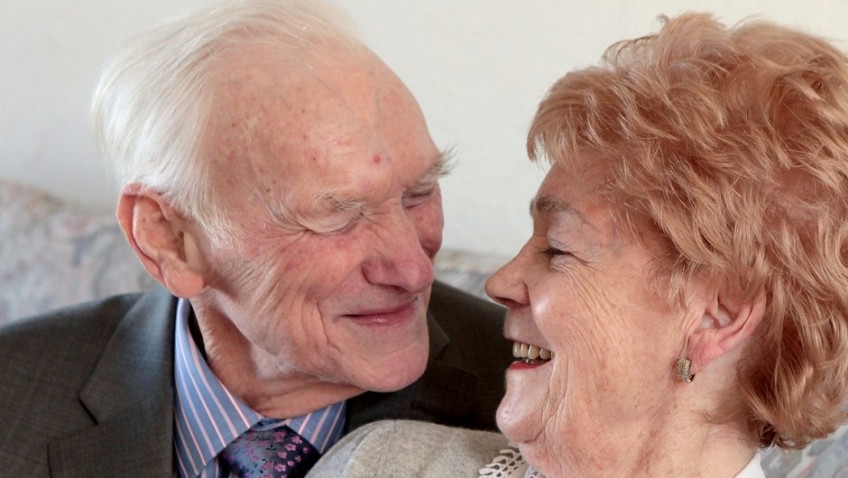 An 88-year-old war hero had to be helped up by his sweetheart after he proposed to her on one knee — and got stuck.

Arctic Convoys veteran Ken Reith said he fell in love at first sight with Frances Anderson, 80, after spotting her “bum wiggle” across a crowded dance floor. The pensioner pair, from Carnock, Fife, courted for almost 10 years before Ken finally popped the big question in their kitchen couple of weeks ago.

Ken and Frances got hitched in a secret ceremony at Dunfermline Registry Office on Tuesday with friends and family only finding out about their wedding the next day.

Ken said: “I always thought that it was tradition for the man to get down on one knee but I didn’t expect to struggle for so long to get up.

“Thankfully, she said yes and then gave me a hand up. That was just a few weeks ago and now we’re married.

“We met 10 years ago at a singles dance. I had seen her distinctive bum wiggle from across the room and I thought ‘I fancy a bit of that.'”

Ken had joined the navy at the age of 15 and left 40 years later as a Lieutenant-Commander.

In November, he was awarded with the prestigious Medal of Ushakov by the consul of the Russian Federation in Edinburgh.

But, as a result of his war efforts, he has been diagnosed with mesothelioma, a type of cancer affecting the function of his lungs. The cancer is thought to have stemmed from years of inhalation of asbestos during his time in the navy which included the Arctic Convoys.

Ken added: “A lot of people were asking when I was going to make an honest woman of her.

“When I was diagnosed with cancer we thought it was time to push plans forward.

“The worst case scenario is that I’ve got 12 months to live but I said ‘no bloody way’ to that — I want to reach the big 90.

“I had her on a probation period for around ten years before deciding that I wanted to propose.”

Frances said: “I wasn’t expecting it when he proposed and was worried that he might have hurt himself but he said to me ‘it’s about time that I do this and do it in the right way’.

“I think it took him such a long time because he didn’t think I was interested in marriage but I also thought he wasn’t interested so it was quite a big shock.”

The couple had planned holidays in Tenerife and New Zealand before cancelling after hearing of Ken’s condition.

Plans to fly there have been put on hold but they hope to go on a cruise for their honeymoon.