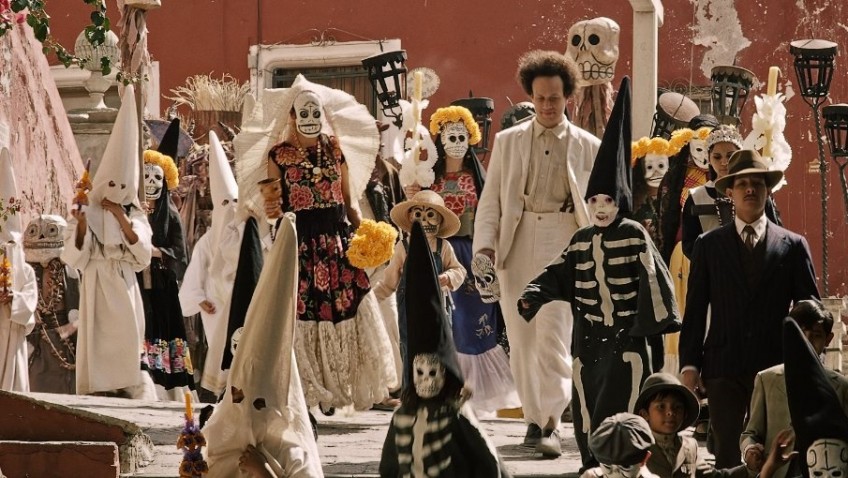 EISENSTEIN IN GUANAJUATO (Axiom). The great Russian director Sergei Eisenstein (played by a flamboyant, charismatic Elmir Back) goes to Mexico in 1931 to film Que Viva Mexico (250 miles of footage, never completed) and loses his virginity with the help of his Mexican guide (Luis Alberti). Peter Greenaway’s grandiose film, with its triptych split screen and fast editing, has his familiar stylistic stamp.  His extraordinary visual, theatrical, baroque, naked bravura is on full display. There are clips from Strike, Battleship Potemkin and October and also from the Mexican Carnival, The Day of the Dead. I haven’t enjoyed a Greenaway film so much since Prospero’s Books.

VARIETÉ (Eureka). This 1925 German silent film, a melodramatic story of lust and murder, is directed by E A Dupont with expressionistic flourish. A middle-aged acrobat (Emil Jannings) runs a sleazy fairground theatre. He deserts his wife and baby for a young woman (erotic Lya de Patti). They join up with an English trapeze artist (Warwick Ward) who seduces her. The film is notable for Jannings’s intense brooding performance and Karl Freud’s striking photography and the montages of faces, streets, cafés and bars. The trapeze sequences in Berlin’s Wintergarden Theatre, with a swinging camera, are amazing. The video comes with three different musical accompaniments. Johannes Contag’s score, never afraid to ham it up, is easily the best, dramatically and psychologically.

WIENER-DOG (Picturehouse Entertainment). Todd Solondz’s Indie film is four oddball short stories linked by a dachshund, whose owners include a family of three, a vet who saves the dog from being put down, a failed screenwriter and lecturer on film, and a bitter old lady dying of cancer. The only story in which the dog features strongly is the first. She has diarrhoea all over the kitchen floor and garden path, a suitable retort to the mom (Julie Delpy) who had her splayed. The only people who totally love the dog are a little boy and a Downs’ Syndrome brother and sister. The best performance is by Danny DeVito as a very miserable lecturer. The funniest moment is an interview with a film student (Devin Druid) who can’t name a single film he has seen.

THE GLASS SHIELD (BFI). Ice Cube plays an innocent man who gets framed by the police. It’s only a cameo role but his face looms large on the poster which is unfair to Michael Boatman who is actually playing the leading role, a rookie cop, the only black in the unit, who wants to do the right thing and whose romantic ideas of the police gets a rude awakening. Charles Burnett’s 1994 exposure of institutional corruption and racism in the Los Angeles police force was based on real stories. Boatman’s sympathetic performance led to a highly successful career in television. There’s good support from Bernie Casey as an honest attorney.

CHARLIE CHAPLIN THE ESSANAY COMEDIES (BFI). The 26-year-old Chaplin worked at the Essanay Studios in 1915 and 1916. Much of the comic business and slapstick is rooted in the old music hall routines with which he grew up; but endless pratfalls quickly become tiresome. It is not his best work but there is still much to enjoy: The Tramp, (his debut role) A Woman (in which he was in full drag and convincingly girly), The Bank (as a janitor daydreaming of loving Edna Purviance and doing heroic deeds), A Night in the Show (he played two roles, a gentleman in the stalls and a rowdy galleryite) and his Burlesque of Carmen.

SOUTHSIDE WITH YOU (Soda) is an attempt to recreate the essence of the first date of the young Barack Obama (Parker Sawyers) and the young Michelle (Tika Sumpter), a lawyer, which took place in Chicago in the summer of 1989. They go to an art gallery (see the paintings of Ernie Barnes), have sandwiches in the park, attend a community meeting (at which Barack speaks eloquently), go to the movies (see Spike Lee’s Do the Right Thing) and have an ice-cream and kiss. The film, which puts a lot of pressure on the actors to get it physically and verbally right, is sweet, romantic, anodyne and a somewhat pointless exercise.

EL SUR (BFI). The Spanish director Victor Erice in 1973 directed one of the greatest Spanish films, The Spirit of the Beehive. His 1983 film, El Sur (The South) is a study of a relationship between a father (Omero Antonutti) and his daughter (Icia Ballain). Dad all his life longed to go back to his birthplace in the South to find the woman he loved but he never did. The film, tantalisingly, stops as he is about to leave. The producers were unwilling to give Erice any more money to finish it.